The $1 million TVG.com Haskell Stakes (G1) is New Jersey's most prestigious race, featuring some of the top East Coast 3-year-olds going 1 1/8 miles over the main track at historic Monmouth Park in Oceanport, looking for automatic entry into the Breeders' Cup Classic (G1) under the Breeders' Cup Challenge Series "Win and You're In" promotion, as well as 100 points to the winner in the Kentucky Derby Championship Series, due to the Derby postponed to September. Due to attendance restrictions, there were very few fans in attendance however a new record Haskell Day handle of $20.48 million was wagered on the 14-race card. Conditions were typical for July on the Jersey Shore, with the main track fast and 85 degrees under clear skies when the Haskell went to post. Authentic was sent off as the 3-5 favorite in the field of 7. In to challenge him included 9-5 second choice Dr Post and 11-2 third choice NY Traffic. 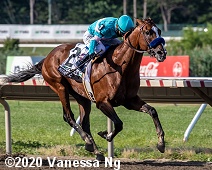 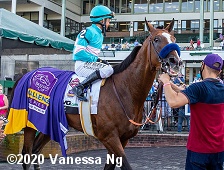 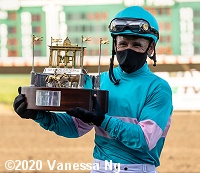 Left: Authentic in the winner's circle. Winning trainer Bob Baffert, celebrating his record 9th Haskell, said by phone from California, "I'm just so proud of him but I was like everybody else telling Mike (Smith), 'You better stay after him. You'd better keep busy.' He (Authentic) looks at everything, as we've seen in his past races. I could tell he wasn't focused going down the stretch but he held on. He saw that horse coming to him and he took off again. Jimmy (assistant trainer Barnes) said he came back not really that tired. We're learning about the horse. He might need a little blinker, though. He was playing in the stretch. I had told Mike that he had to stay after him and keep him busy. I could tell he wasn't laying it down. He was just playing out there and that horse came to him and kept him going. But when he got (out on an easy lead) by himself like that I thought for sure he was just going to go on. But he ran a great race." 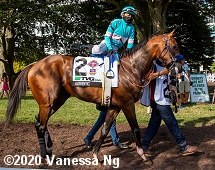 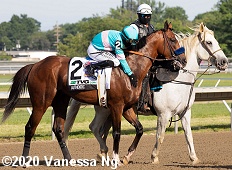 Left: Riders up for Authentic in the paddock. Winning jockey Mike Smith said, "He's a colt with an abundance of talent. Ability is something he does not lack. He's got a lot of it. But what he is lacking right now, he's learning. He's growing up. He sees things. Down the backside there are a lot of shadows back there from the sun at this point. He looked at every single one of them and he wouldn't let me get him down close to the fence because he was looking at them too much. Then he kicked away like I wanted him to heading for home. Once that horse started to come at him I wanted to get into him a little bit just to get him going. If he was going to start playing again I thought 'I just better stay riding and hope he could hang on at that point' – which he did. I rode him well past the wire just to show him to keep running. I didn't want to think it was over when he hit the wire. Once that horse got next to him he galloped out and was back on the bridle." 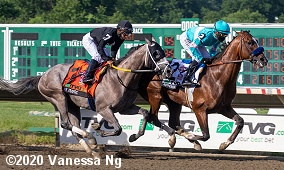 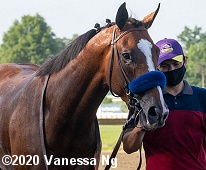 Right: Authentic heads back to the barn after the race. Jimmy Barnes, assistant to Bob Baffert said, "It's a big step to put him on a plane and travel this far. He handled the paddock well, handled the post parade, everything well and broke good. Like Mike said he was just a little quirky on the racetrack looking at a few things. There's room for a lot of improvement there. It was a race where it seemed this horse was going to suit this racetrack. We like to bring a good horse here. It's one of our favorite spots of the year." Kumin added, "Bob has my 100% support in everything he does. This was an awesome win. It's a great team with some great partners." 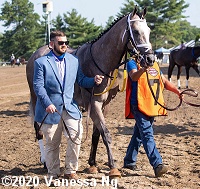 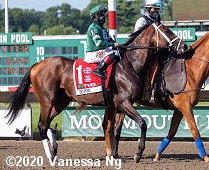 Left: Second place finisher NY Traffic walks over before the race. Trainer Saffie Joseph Jr. said, "Coming into this race he missed a work and I was a little concerned: Did we have enough. At the 1/4 pole you could see Authentic was cruising and my horse was off the bridle. To dig down and dig deep you can't be more proud of that. I was pretty sure we lost when I first saw it. We were a head in front right after the bob at the wire. I just want to keep going forward. Hopefully all goes well to the Kentucky Derby and we're living the dream." Jockey Paco Lopez added, "I was sure I got him – 100 percent. I can't believe it. I'm surprised we didn't win. I really thought we got him." 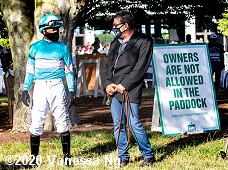 Left: The horses break from the gate for the Haskell.

Right: Winning jockey Mike Smith and assistant trainer Jimmy Barnes in the paddock before the Haskell. Note that owners were not allowed in the paddock. 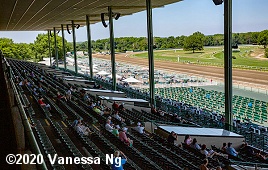 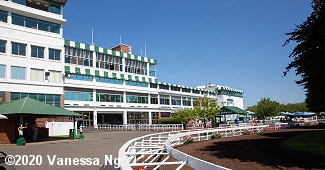 Because of attendance restrictions placed by the government of New Jersey, attendance was limited to about 4,000 fans, employees, media, and horsemen. 2019 had over 25,000 fans in attendance and the facility can hold more than 60,000. Originally they were going to be capped at 25% capacity but that was later lowered. Social distancing and mask wear were enforced and temperature checks required before entry. 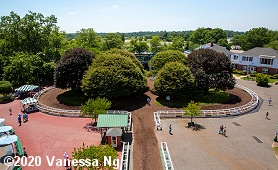 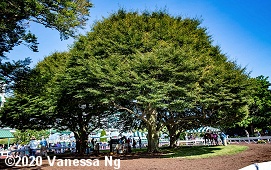 Normally the paddock would be crowded both inside and outside, but with attendance limited and owners and media not allowed inside, it was pretty deserted.