The limited number of fans (restricted to about 4,000 due to coronavirus precautions) who came out to Monmouth Park on Sunday afternoon for the TVG.com Haskell Stakes (G1) enjoyed 5 stakes races on the undercard. Conditions were typical for July on the Jersey Shore, with sunny skies and tempeatures in the high 80's, the main track rated fast and the turf course firm. However a new record Haskell Day handle of $20.48 million was wagered on the 14-race card, only the second time outside of the 2007 Breeders' Cup that over $20 million was wagered on a Monmouth card. Racing secretary and director of racing John Heims said, "The reality is that this will go down in history as one of the most challenging yet gratifying Haskell Days in history. We are grateful to the Governor for his leadership and for permitting us the ability to have race fans to enjoy this terrific experience and be part of a day that will long be remembered." 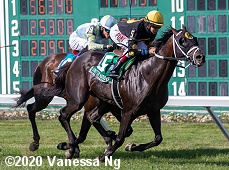 Immediately before the Haskell, a field of 9 older horses contested the $300,000 United Nations Stakes (G1) over 1 3/8 miles on the turf. Arklow was sent off as the 6-5 favorite off his 6th place finish in the Elkhorn (G2) after finishing a close second in the Louisville (G3). In to challenge him included 9-2 second choice Muggsamatic, winner of the Soldier's Dancer Stakes, and 5-1 third choice Standard Deviation, 6th in the Tiller Stakes after finishing second in the His Highness the Amir Trophy (G1) in Qatar. 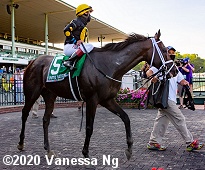 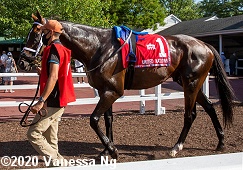 Left: Aquaphobia in the winner's circle. Winning trainer Mike Maker said, "Joe Bravo rode him beautifully. We had a lot of confidence in the horse coming in, and he didn't let us down. We felt this horse was better than we were getting out of him. I think the distance was the reason. He'd been training dynamite, so I was optimistic"

Right: Fourth place finisher and beaten favorite Arklow in the paddock before the race. The Brad Cox trainee has a record of 6 wins, 7 seconds, and 2 thirds in 28 starts, earnng $1,877,116 for owners Donegal Racing, Joseph Bulger, and Peter Coneway. 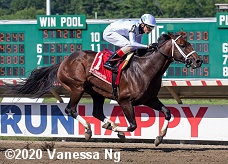 Jockey Jorge Vargas Jr. sent Global Campaign to the lead first time by through fractions of 23.77, 47.91, and 1:11.69 while pressed by 12-1 Joevia and stalked by Bal Harbour. Turning for home, Bal Harbour moved up to gain the lead through 1 mile in 1:37.53 but weakened late. Global Campaign regained the lead and drew off to win by 1 1/2 lengths over late-running 9-1 Math Wizard in 1:50.47. It was another length back to Bal Harbour third. 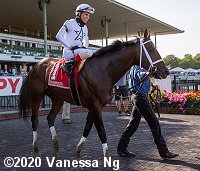 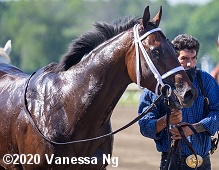 Left: Global Campaign returns after the race. Winning trainer Stanley Hough said, "I didn't like seeing all the pressure on him all race. But I can't say I'm surprised he withstood it. I had my doubts when he got headed in the stretch by Bal Harbour. But Jorge rode him good, and the horse responded great. He's a very, very talented horse, so it's good to see him come back like this. Hopefully he continues to show himself. He's shown from the start that he's a good horse. He's well bred and, gosh, he has so much talent. He has kind of been his own worst enemy. But he is finally maturing, and maybe we can build from here."

Right: Global Campaign heads back to the barn after the race. Winning jockey Jorge Vargas Jr. said, "If you saw him this race, even with those horses putting pressure on him all race, he kept his ears pricked and he was relaxed and off the bit. When I asked him a little bit, he jumped on the bit and he had something left. He was very strong. I just moved to Monmouth Park for the summer for the first time this year, and this is my first win of the meet, so it's pretty special." 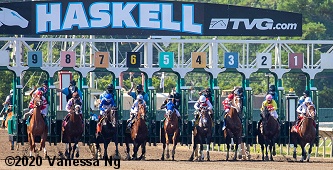 The horses break from the gate for the Monmouth Cup. 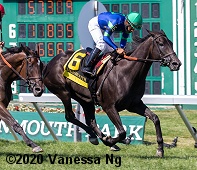 Jockey Mike Smith sent Valedictorian to the lead out of the chute through fractions of 23.62, 47.68, and 1:10.94 while pressed by 9-2 fourth choice Tapit Today and stalked by Nay Lady Nay. Turning for home Valedictorian tired allowing Tapit Today to inherit the lead through 1 mile in 1:34.25. Nay Lady Nay, confidently handled by Paco Lopez, came through between horses to win by 1/2 a length over Beautiful Lover in 1:46.21, just 0.29 second off the course record. It was another 3/4 length back to 7-1 Feel Goorious third. 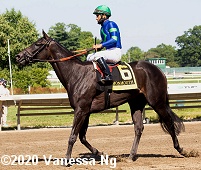 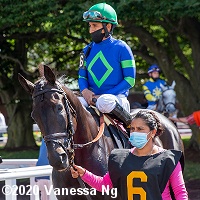 Left: Nay Lady Nay returns after the race. Winning trainer Chad Brown, who trains the first 2 finishers, said from Saratoga, "I was very pleased with both fillies' efforts. Both got good trips and kicked nicely."

Right: Nay Lady Nay in the paddock before the race. Winning jockey Paco Lopez said, "She's a nice filly, and she showed some nice speed. Chad has done a great job with her." 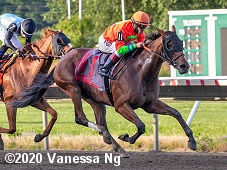 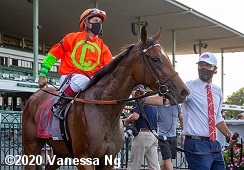 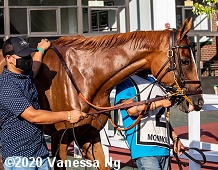 Left: Horologist in the winner's circle. Winning owner Cameron Beatty said, "Sometimes the horse goes to something new that they're not familiar with (in reference to Horologist pulling up in her previous start in the Santa Maria). It's all a risk. Me and my partners took the risk. We regrouped and we decided to bring her back to Monmouth Park. We knew she loved it here. She's 5-for-5 here now. She just loves it here. I love it here. It's unbelievable that she's a multiple graded stakes winner now as a Jersey-bred. Just a tremendous feeling of accomplishment." Jockey Joe Bravo added, "I just didn't want to lose ground going around the first turn. I was so scared of getting away slowly and getting carried 10 wide. I was able to breathe and relax a lot better when I was able to fit her in and get over, and there were only two horses in front of us. At times, she was pulling me. Nothing to say other than she ran well." 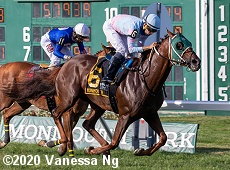 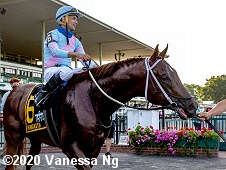 Immediately after the Haskell, a field of 11 older horses contested the $82,500 Wolf Hill Stakes at about 5 1/2 furlongs on the turf. 17-2 American Sailor was quickest out of the chute and and opened a 3 length lead while pressed by 51-1 Snowday and stalked by 11-4 third choice Archidust. American Sailor led to midstretch but Archidust, confidently rideden by Hector Diaz Jr., rallied past to win going away by 1 1/4 lengths in 1:01.26. It was another 2 lengths back to 5-2 second choice Shekky Shebaz third, while 9-4 favorite Dubini checked in 8th.

The Steve Asmussen trainee improved his record to 6 wins, 1 second, and 3 thirds in 13 starts, earning $308,400 for owner Crawford Farms Racing.

On to the 2020 Haskell results and photos