The 20,983 fans who came out to Monmouth Park on Sunday afternoon for the TVG.com Haskell Stakes (G1) enjoyed 5 stakes races on the undercard. Conditions were tropical on the Jersey Shore, with sunny skies, temperatures in the high 80's but with minimal wind and high humidity, the heat index peaked at 102. The main track was rated fast and the turf course firm. 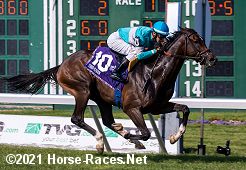 Immediately before the Haskell, a field of 10 older horses contested the $500,000 United Nations Stakes (G1) over 1 3/8 miles on the turf. Manhattan (G1) runner-up Tribhuvan was sent off as the 8-5 favorite. In to challenge him included 2-1 second choice Arklow, winner of the Louisville (G3), and 7-2 third choice Master Piece, 6th in the Manhattan. 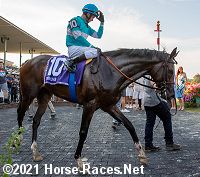 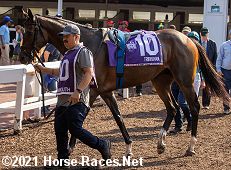 Left: Tribhuvan in the winner's circle. Luis Cabrera, assistant to winning trainer Chad Brown said, "The way he ran (on the lead) was the strategy. That's the way he ran in the Manhattan in his last start. He was just second-best to Domestic Spending. So we wanted to do the same thing this race. This horse has been training well. We've had him for a week at Monmouth Park and he has really taken to this place. I wasn't worried about them catching him because these fractions weren't all that fast. In the Manhattan, he went :22-and-change and then :46.4 to the half. That was much faster and he still held strong for second. When I saw the fractions today, I knew we were okay."

Right: Tribhuvan in the paddock. Winning jockey Flavien Prat said, "We had a good trip. He broke well and got me in the race. Then I was surprised I was alone because I didn't feel like I was going that fast, and he really came back to me nice along the backside, and I took a nice breather. It was a good breather. The race went really well when I asked him to make his move. I kind of sent him out there because I didn't want to be too wide so I ended up on the lead. My only concern from that point was getting him back into a nice rhythm and without losing too much energy so that's what I did. It worked out well. I had a lot of horse under me and he was really traveling well." 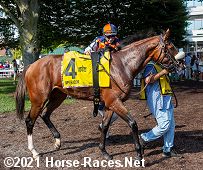 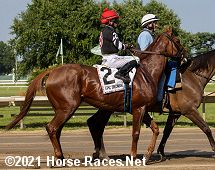 Left: Second place finisher Imperador in the paddock for "riders up". The Paulo Lobo trainee improved his record to 3 wins, 4 seconds, and 0 thirds in 13 starts, earning $221,138 for owners Bonne Chance Farm and Stud R.D.I. 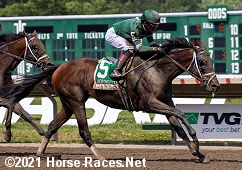 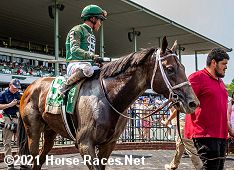 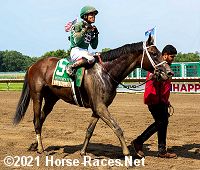 Left: Dr Post in the winner's circle. Winning trainer Todd Pletcher said, "I thought (blinkers) made the difference today. He had a tricky trip in the Met also so that was a draw-a-line-through-it race. I do think he appreciated the mile-and-eighth today. We got a good honest pace and that helped him today. He got into a good comfortable rhythm and then put in a good sustained run."

Right: Dr Post returns after the race. Winning jockey Joel Rosario said, "He was more focused even in the backside, and he seemed like he was going pretty easy. He took his time in the turn a little bit but when he started to stretch his legs he had a nice run, especially in the final sixteenth. I was happy with the early fractions and how fast they were going. I tried to get him into it a little more because he was going so easy, and I wanted to have him in the race a little more at that point. The last furlong he really got into his stride. It was a very good performance." 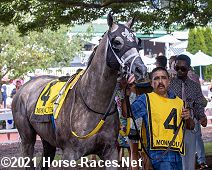 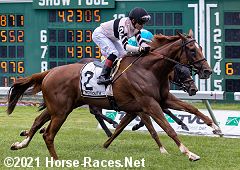 Jockey Tomas Mejia sent 65-1 longest shot No Mercy Percy to the lead out of the chute through fractions of 25.07, 49.56, and 1:12.86 while pressed by Nay Lady Nay and stalked by Juliet Foxtrot. In the stretch Juliet Foxtrot gained the lead through 1 mile in 1:36.63 but Great Island, last early under Joel Rosario, came out ro room and rallied to win by 1/2 a length over 13-2 Kalifornia Queen in 1:48.89. It was another 1/2 length back to favorite Juliet Foxtrot third. 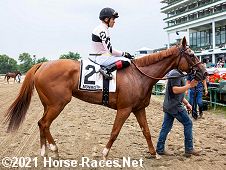 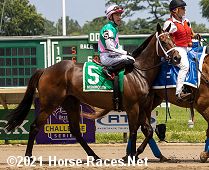 Left: Great Island heads to the winner's circle. Winning trainer Chad Brown said, "When that hole opened up, I thought Juliet Foxtrot was gone. but Great Island did a nice job of closing and the distance helped. She ran a very good race as did (runner-up and stablemate) Kalifornia Queen." Jockey Joel Rosario added, "She's a nice horse and it makes it easy when you ride that kind of horse."

Right: Third place finisher and beaten favorite Juliet Foxtrot in the post parade. Trainer Brad Cox said, "I'm a little disappointed. She was a heavy favorite. It was a carbon copy of the Churchill race, giving up the lead late. I hope she comes out of it OK and maybe a mile is all she wants." 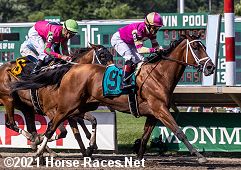 Jockey Paco Lopez sent Mrs. Danvers to the lead first time by through fractions of 24.02 and 46.99 while pressed by 7-2 fourth choice Our Super Freak and stalked by Bajan Girl. On the far turn Mrs. Danvers tired badly allowing Our Super Freak to take over through 3/4 in 1:10.90 and 1 mile in 1:35.46. 14-1 Graceful Princess, 4th early under Joel Rosario, came out 3 wide and outfinished Bajan Girl to win by 3/4 length in 1:41.67. It was another 1/2 length back to Our Super Freak third, while favorite Vault failed to rally and checked in 5th beaten 9 lengths. 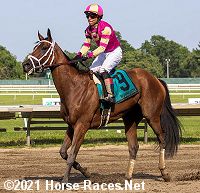 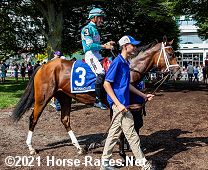 Left: Graceful Princess returns on her way to the winner's circle. Winning jockey Joel Rosario said, "It's always nice to ride for Todd. I don't think she has run quite this well before but today she was ready and she won a tough race and proved she was ready for this kind of company. The pace was perfect. I found a spot outside and she was clear and it looked like she liked being there. After that it was all her. She looked like she was enjoying herself out there. It was a very good performance. I came into today thinking I had some chances but you don't know. You have to have the right horses." 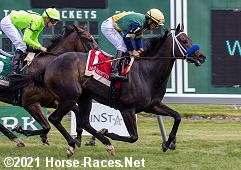 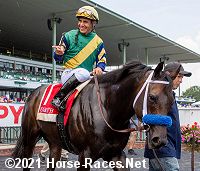 Kicking off the Haskell day stakes action, a field of 6 older horses contested the $100,000 Wolf Hill Stakes at about 5 1/2 furlongs on the turf. 12-1 third choice The Connector was quickest away and set the pace of 21.57 and 43.67 while pressed by 10-1 second choice Readyforprimetime and stalked by 1-10 favorite The Critical Way. Turning for home jockey Paco Lopez sent The Critical Way to the lead through 5f in 55.00 and he outfinished The Connector to win by 3/4 length in 1:01.11. It was another 2 1/4 lengths back to 29-1 longest shot Cajun Cassanova third.

The Jose Delgado trainee improved his record to 9 wins, 6 seconds, and 2 thirds in 26 starts, earning $479,168 for owner Monster Racing Stables.

On to the 2021 Haskell results and photos