The 22,138 fans who came out to Monmouth Park on Sunday afternoon for the TVG.com Haskell Stakes (G1) enjoyed 5 stakes races on the undercard. Conditions were tropical on the Jersey Shore for late July with sunny skies and temperatures in the mid 90's. The main track was rated fast and the turf course firm. Betting on the 14 race card drew a handle of $19,896,953, up $4.5 million from last year. 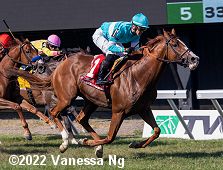 Immediately before the Haskell, a field of 10 older horses contested the $600,000 United Nations Stakes (G1) over 1 3/8 miles on the turf. Old Forester Turf Classic (G1) third place finisher and Manhattan (G1) runner-up Adhamo was sent off as the 9-5 favorite over two horses at 9-4 second choice, Tribhuvan, winner of the Manhattan, and Gufo, third in the Manhattan. 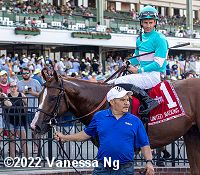 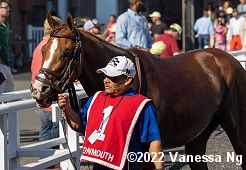 Left: Adhamo in the winner's circle. Winning jockey Flavien Prat said, "He didn't break super sharp and I was a little worried with post 1. But the pace was fair, a little slow but fair, and he relaxed well. When they slowed it down he was pulling me. I had to be patient and wait to get out. He made a great run in the stretch. When I tipped him out he was ready to go. I think I have won two or three stakes races in a row but never four in a row like this."

Right: Adhamo in the paddock. Winning trainer Chad Brown said, "He's still a little bit of a work in progress. I'm still trying to figure out what his best distance is, and ground and such. I was pretty confident going in to today that if he was able to get out in the clear and with a little bit extra ground to work with that he could run down a horse as good as Tribhuvan, and he did. He's a pretty talented horse. We're still figuring the horse out." 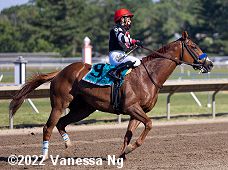 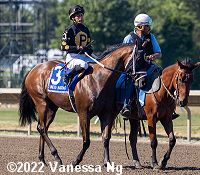 Left: Second place finisher Epic Bromance returns after the race. Trainer Kent Sweeney said, "I'm really happy about it. This is the best I've finished in a Grade 1 race. We were third last year, second this year. We're going to win it next year." 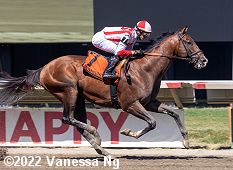 The $400,000 Monmouth Cup Stakes (G3) featured a field of 7 older horses going 1 1/8 miles on the main track. 2021 Kentucky Derby (G1) 10th place finisher Highly Motivated and allowance winner last out was sent off as the 4-5 favorite over 8-5 second choice Pipeline, winner of an allowance after finishing 8th in the Cigar Mile (G1), and 10-1 third choice Rough Sea, winner of the Native Dancer at Laurel.

Jockey Paco Lopez sent 26-1 longest shot Antigravity to the lead through fractions of 23.63 and 47.47 while pressed by 25-1 King of Dreams and stalked by Pipeline. On the far turn Pipeline took over the lead through 3/4 in 1:10.34 but favorite Highly Motivated, 6th early under Flavien Prat, moved out three wide to sweep to the lead through 1 mile in 1:34.04. Kept to task by Prat, Highly Motivated drew off late to win by 1 3/4 lengths in a new track record 1:46.53, 0.27 seconds faster than the previous record set by Spend a Buck in 1985. It was another 2 1/4 lengths back to 12-1 Informative third. The new record would be broken 2 hours later by Cyberknife in the Haskell. 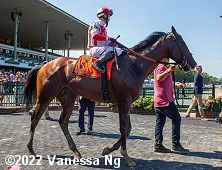 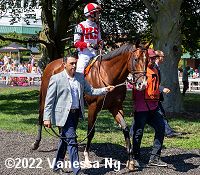 Left: Highly Motivated in the winner's circle. Winning trainer Chad Brown, who trains the first 2 finishers said, "The grueling stretch duel in the Blue Grass really took a toll on him. Going into the (Kentucky) Derby he didn't run at all. He went to the sidelines for quite a while. It's really taken me this long to get the horse back from that tough, tough race against Essential Quality (Blue Grass). He's finally — over a year later — rounding back into that good form. He required incremental steps. I let him find his legs again to find that sharpness he had."

Right: Highly Motivated in the paddock. Brown added, "He needs to be a bit more forwardly placed and I saw it today. He broke good and was happy to rate, but always in hand and ready to go. That's the Highly Motivated I'm used to, and the horse he was early on the Derby trail." 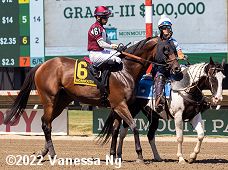 Left: Second place finisher and beaten favorite Pipeline in the post parade. Trainer Chad Brown said, "The plan was to go to the lead. It sounds like from Manny (Franco) there were a couple riders who were so intent on the inside that he didn't feel it would be good judgment to clear him because he potentially would have been hounded. He decided to rate the horse. The horse ran very, very well. I think he probably prefers to go to the lead when the conditions are right."

Right: The horses break from the gate for the Monmouth Cup. 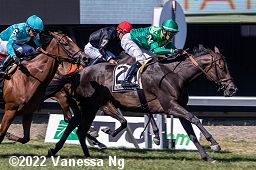 The $200,000 WinStar Matchmaker Stakes (G3) featured a field of 7 older fillies and mares going 1 1/8 miles on the turf. Allowance winner Lady Rockstar was sent off as the 9-5 favorite over 3-1 second choice Fluffy Socks, 4th in the Eatontown (G3), and 7-2 third choice Vigilantes Way, 2nd in the Eatontown.

Jockey Joel Rosario sent 11-2 Flighty Lady to the lead out of the chute through fractions of 23.82, 48.34, and 1:12.21 while pressed by 9-2 fourth choice Lemista and stalked by Fluffy Socks and Vigilantes Way. Turning for home Flighty Lady tired allowing Lemista to take over through 1 mile in 1:35.36. Kept to task by Flavien Prat, Lemista held off Fluffy Socks to win by 1/2 a length in 1:47.07. It was another neck back to Vigilantes Way third, while favorite Lady Rockstar checked in 5th. 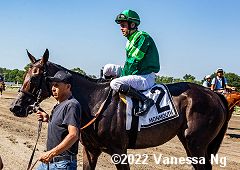 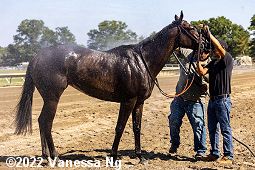 Left: Lemista heads to the winner's circle. Winning trainer Chad Brown, who trains the first 2 finishers said, "Lemista doesn't have a great turn of foot and I've been frustrated when she's been out of position," Brown said. "She ran decent last time when she got dragged to the back of the pack. She just needs to break into position, and today I thought for the first time that she had really good forward position. She has a good kick; she's just not going to circle the field. She's not that kind of horse, so I'm very pleased with the trip that Flavien (Prat) worked out for her."

Right: Lemista gets hosed off after the race. Brown said is he considering the Beverly D (Churchill Downs) or Ballston Spa (Saratoga) for Lemista and runner-up Fluffy Socks. 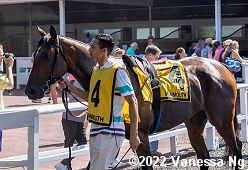 Fifth place finisher and beaten favorite Lady Rockstar in the paddock before the race. 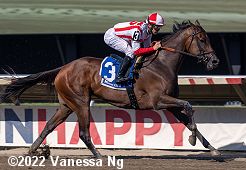 The $400,000 Molly Pitcher Stakes (G3) featured a field of 7 older fillies and mares going 1 1/16 miles on the main track. Ruffian (G2) winner and Ogden Phipps (G1) runner-up Search Results was sent off as the 3-5 favorite over 11-2 second choice Bonny South, 4th in the Ogden Phipps, and 6-1 third choice Beth's Dream, second in the Lady's Secret. 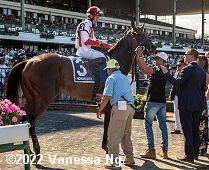 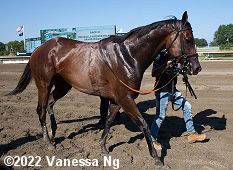 Left: Search Results in the winner's circle. Winning trainer Chad Brown said, "Flavien executed things really well – just get out of there and get outside, try to extract her quick. I think she’s tons the best and I don’t want to take any chances. Just park her out on the center of the track and let her do it. She showed she can handle 1 1/8 effectively with a narrow defeat to Malathaat (in the Oaks). I’m not afraid of it."

Right: Search Results heads back to the barn after the race. Winning jockey Flavien Prat said, "She seemed really push-button. She had some great speed out of the gate, but she can rate, as you can see today. She seems really handy." 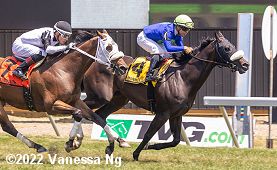 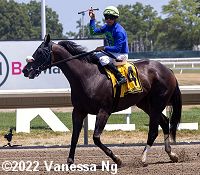 Kicking off the Haskell day stakes action, a field of 6 older horses contested the $100,000 Wolf Hill Stakes at about 5 1/2 furlongs on the turf. 16-1 Breakthrough was quickest away through fractions of 22.44 and 44.18 while pressed by 23-1 Admiral Abe and stalked by 7-2 third choice Belgrano. In the stretch Breakthrough continued to lead through 5f in 55.24 under jockey Sammy Camacho, and held off Belgrano ton win by 1/2 a length in 1:00.99, just 0.32 second off the course record. It was another 1 1/2 lengths back to Admiral Abe third, while 6-5 favorite The Critical Way checked in fifth.

On to the 2022 Haskell results and photos