The 39th running of the $1 million Pepsi North America Cup, Canada's richest harness race, was contested on Saturday night at Woodbine Mohawk Park featuring the best 3-year-old pacing males in North America going the standard 1 mile trip around the 7/8 mile stonedust oval in Campbellville, Ontario, in a major prep for the Pacing Triple Crown. Conditions were unusually chilly for mid June in Southern Ontario, with clear skies and a post time temperature of 13.8 C (56.8 F). A new record North America Cup night handle of $6.3 million was set, beating the old record of $5.6 million set in 2020.

Pebble Beach was sent off as the 1-2 favorite in the full field of 10 off his wins in the Somebeachsomewhere Stakes on June 4 followed by his North America Cup elimination. In to challenge him included 4-1 second choice Night Hawk, second to Pebble Beach in the same elimination after winning the Pennsylvania Sires Stake at Pocono, and 11-2 third choice Beach Glass, winner of the other elimination after finishing second in the Somebeachsomewhere.

Driver Louis-Philippe Roy sent 78-1 longshot Frozen Hanover to the lead first time by through an opening quarter of 27 3/5 while pressed by Beach Glass and stalked by 22-1 I Did It Myway. Down the backstretch, favorite Pebble Beach, parked wide on the clubhouse turn, was sent to the lead by driver Todd McCarthy through a half in 55 seconds and 3/4 in 1:22 3/5. Turning for home, Pebble Beach opened up by 2 1/2 lengths. Beach Glass and driver Yannick Gingras attempted to close to no avail as Pebble Beach cruised the rest of the way to win by 2 3/4 lengths in 1:50. It was another 1 1/4 lengths back to Frozen Hanover third. 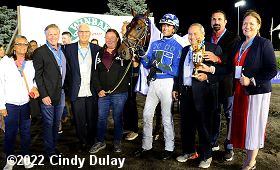 Left: Pebble Beach in the winner's circle. Winning trainer Noel Daley said, "It wasn't where I thought we were going to be, but they were going easy fractions. I left it to Todd to make his decision there and he did the right thing. As you see, he still has his earplugs in, so he wasn't too worried about it. He showed now he's got a bit of versatility – he can do it in front or behind."

Right: The connections with the trophy. McCarthy said, "I would have liked the idea of being able to get in early and make the decision to move, but our hand got forced there and I had to keep pressing," said McCarthy. A :55 [half]... I was pretty happy with that. I just had to look after him from there and I knew he would have a big last quarter for me. He was terrific." 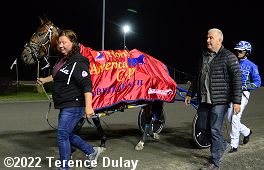 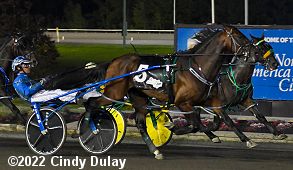 Left: Pebble Beach heads out for the post parade. McCarthy added, "It's so surreal. I'm speechless. I can't thank Noel enough for what he's done for me since I've come over here (from Australia) too. He was a large part in helping me come over and to win this race with him has just been unbelievable. I was lucky enough to pick up this horse early on and he's just been an absolute pleasure." 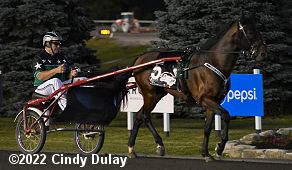 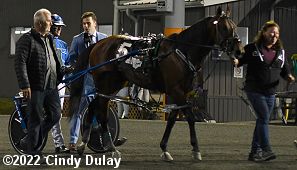 Left: Pebble Beach warms up earlier in the evening. Daley, who is best known as a trainer of trotters, added, "It's probably our biggest win. Mr Muscleman won a million-dollar race [the 2003 Canadian Trotting Classic] up here. It's good to have a pacer. I've never won a big race with a pacer like this." 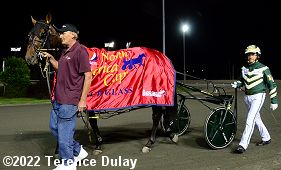 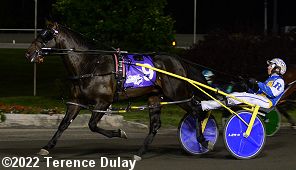 Right: Third place finisher Frozen Hanover warms up before the race with driver Luc-Philippe Roy in the bike. The Luc Blais trainee improved his record to 2 wins, 2 seconds, and 1 third in 9 starts, earning $145,100 for owner Determination Stable from Montreal, Quebec. 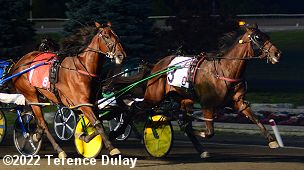 There were five other stakes races on Saturday night. The $401,000 Fan Hanover Stakes is the distaff counterpart to the North America Cup, with a field of ten 3-year-old pacing fillies. 13-1 Silver Label was quickest away through an opening quarter of 26 4/5 before 8-5 second choice Sea Silk took over on the backstretch through a half in 55 seconds. On the far turn 5-1 third choice Prohibition Legal moved up to challenge through 3/4 in 1:22 and led to midstretch. 6-5 favorite Treacherous Dragon, 5th early and parked wide on the far turn with driver Tim Tetrick, rallied to outfinish fellow closer 12-1 Wickedly Innocent by a head in 1:50 1/5. It was another 2 1/4 lengths back to Prohibition Legal third. 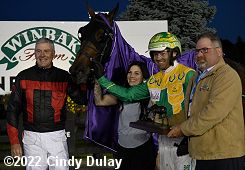 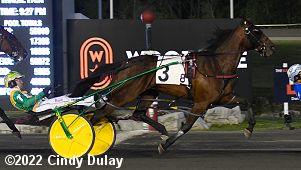 Left: Treacherous Dragon in the winner's circle. Winning trainer Brett Pelling, who trains the first two finishers said, "They're both really strong fillies, they're very efficient. (Treacherous Dragon) is very calm and stoic, nothing fazes her too much."

Right: Treacherous Dragon shortly after the start. Winning driver Tim Tetrick said, "I did not want to be on the front (given the windy conditions). I had the trip I wanted. Brett has done a great job with this filly, he's brought her along slow. He is great at what he does and setting them up for the three-year-old year. He's got this mare in form, and hopefully he gets to keep her that way for the next weeks." 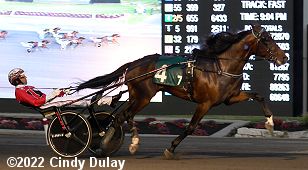 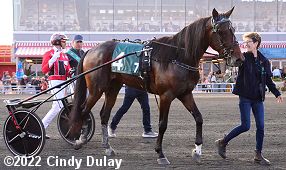 Left: Fast As The Wind in the winner's circle. Winning driver Dexter Dunn said, "He was running in a touch coming off that last turn and I had to nurse him there. Once (Looks Like Moni) made a break, it got us a little closer to the front there, and he laid down like he has been this year. He's definitely going in the right direction. He's doing everything right and hasn't put in a foot wrong so far. He's finishing his races off really strongly."

Right: Fast As The Wind returns after the race. Asked about running in the Hambletonian, Dunn added, "I think so. It looks like quite an even bunch of trotters here. Like I said, he hasn't done anything wrong and he's heading in the right direction. He is versatile and he has a good last quarter in him." 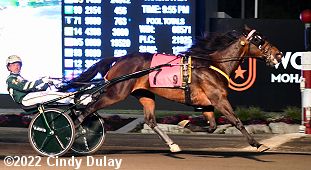 A field of 10 older trotting fillies and mares faced the starter in the $211,000 Armbro Flight Stakes. 12-1 Herculisa set the pace of 26 4/5, 56, and 1:23 2/5 while pressed by 9-5 second choice Atlanta and stalked by 14-1 HP Mama B. Herculisa continued to lead to midstretch but tired badly in the final furlong. Atlanta and driver Yannick Gingras took over to win by a length over late-closing 15-2 When Dovescry. It was another 1 1/4 length back to 6-5 favorite Bella Bellini third. 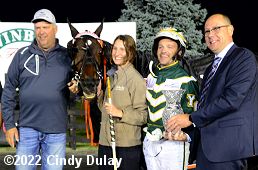 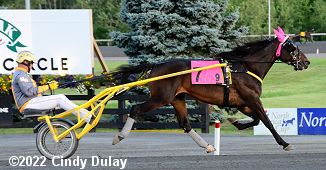 Left: Atlanta heads to the winner's circle. This is her second Armbro Flight win in her fourth appearance, also winning in 2019. Winning driver Yannick Gingras said, "She's incredible, as she gets older, you appreciate her even more. She's so game and does her job week in and week out. She deserves the big ones. Ron Burke does a tremendous job bringing horses back year after year after year. I can't praise him enough."

Right: Atlanta warming up earlier in the evening with her pink bunny ears. Gingras added, "You can do whatever you want with her, you can leave or go back to last. She hasn't been as good as perhaps in years past, I wanted to spot her and hope for the best from there. We got a good trip, it worked out perfect tonight." 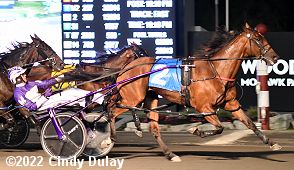 Immediately before the North America Cup, a field of 10 faced the starter in the $315,000 Roses are Red Stakes for older pacing fillies and mares. Driver Bob McClure sent 51-1 Gias Surreal to the early lead through fractions of 26 3/5, 55, and 1:22 4/5 while pressed by 34-1 Kobes Gigi and stalkedby 14-1 Fire Start Hanover. Gias Surreal continued to lead to midstretch but 1-2 favorite Test of Faith, sixth and parked wide with driver David Miller, rallied by to win by a length over Fire Start Hanover in 1:50 1/5. It was another 1/4 length back to pacesetter Gias Surreal third. 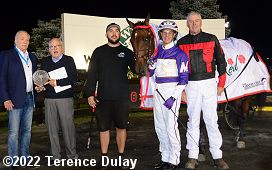 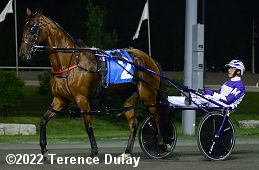 Right: Test of Faith in the post parade. Miller added, "I'd have to say she's probably the best mare I've ever sat behind. I always liked Glowing Report, Shebestingin was always one of my favorites, and obviously this mare." 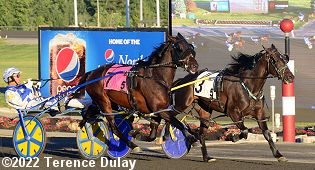 Kicking off the stakes sextet on Saturday night, a field of 9 faced the starter in the $100,000 Mohawk Gold Cup Invitational for older pacers. 56-1 Wheels On Fire was quickest away through an opening quarter of 26 seconds before 7-4 second choice Allywag Hanover took over through a half in 53 2/5 while pressed by 17-2 Linedrive Hanover and stalked by 5-4 favorite Jimmy Freight. Jimmy Freight an driver Louis-Philippe Roy came out wide for room and swept to the front through 3/4 in 1:20.1. Linedrive Hanover closed the gap late but Jimmy Freight held him off to win by a nose in 1:48. It was a long 4 lengths back to Allywag Hanover third. 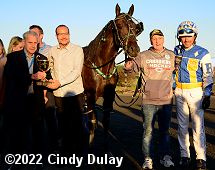 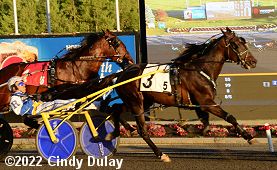 Left: Jimmy Freight in the winner's circle. Winning driver Louis-Philippe Roy said, "Jimmy just wanted to win. After the wire James (MacDonald, driving Linedrive Hanover) asked me ‘would you take a dead heat?' I said I would because I don't want to get beat but I was pretty sure I won."

Right: Jimmy Freight shortly after the start. WInning owner Adriano Sorella said, "It's been pretty special coming back," Sorella noted. "It was a little slow at the beginning, but he's big and he's coming back strong, I'm excited about it. He has five or six races in the US, we have some decisions to make. Do we send him down there and leave him there? Do we go back and forth? He's been a little bit studdy ever since he came back from stud duty. He's a little bit of a different horse on the trailer so we have to baby him a little bit."