The 33rd running of the $1 million Pepsi North America Cup, Canada's richest harness, was contested on Saturday night at Mohawk Racetrack featuring the best 3-year-old pacing males in North America going the standard 1 mile trip around the 7/8 mile stonedust oval in Campbellville, Ontario. A full field of 10 lined up behind the starter under ideal conditions, cleae skies, minimal wind, and temperatures in the low 80's. 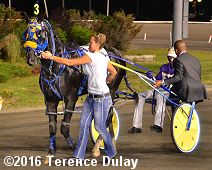 Left: The winner's circle celebration for Betting Line. Winning trainer Casie Coleman, who recently turned 36, said, "This was all I wanted for my birthday and Betting Line made it come true." This is her second NA Cup after winning in 2010 with Sportswriter. She added, "I always said I wanted to see him get a trip from off-the-pace where he had cover and that worked. Dave drove him perfect and they were going all kinds of quick fractions. I was a little worried that he was a bit too far back, but I saw the clock pop up 1:20 and a piece so I was kind of happy. It's the only million-dollar pace there is and it's on our home track and it's in our back yard. I just live 20 minutes from here. I don't even know how to put it into words. It's just amazing to race it, never mind win it twice. I'm pretty excited." 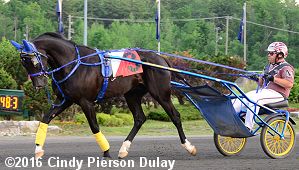 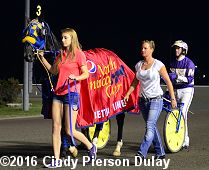 Left: Betting Line warms up earlier in the evening. Driver Dave Miller, winning his first NA Cup after 16 previous attempts, said, "The first time I drove a horse in this race was Falcons Future, I mean that was in '94 so, yes, this is very sweet. He has been very impressive both weeks and I like his never give in attitude."

Right: Betting Line in the post parade. Winning co-owner Mac Nichol said, "It's a great team. Casie did a a super job. Dave did a super job driving him. It couldn't be better." 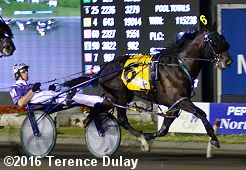 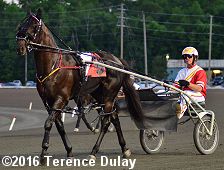 Left: Second place finisher Racing Hill on the lead first time by. The 3-1 second choice pressed the pace in second or third with driver Brett Miller, and passed the pacesetter to get second beaten just a length. The Tony Alagna trainee improved his record to 5 wins, 3 seconds, and 3 thirds in 14 starts, earning $412,162 for owner-breeder Tom Hill.

Right: Third place finisher Control the Moment warms up earlier in the evening. The 8-1 fifth choice set the pace with driver Randy Waples, led to the 1/8 pole but tired to finish third beaten 5 lengths. The Brad Maxwell trainee improved his record to 8 wins, 1 second, and 1 third in 12 starts, earning $609,207 for owner Control the Moment Stable. 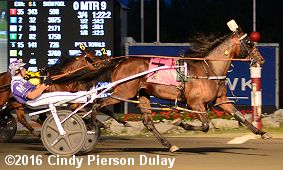 There were six other stakes races on Saturday night. The $438,000 Fan Hanover Stakes is the distaff counterpart to the North America Cup, with a field of ten 3-year-old pacing fillies. 7-1 Good Will Hanover was quickest away through fractions of 26.1, 54.3, and 1:22.2 while as many as 1 3/4 lengths in front of 5-2 second choice Darlinonthebeach pressing her in second. Entering the lane Good Will Hanover tired allowing 40-1 Lindwood Beachgirl to gain a short lead at the 1/8 pole, but 2-1 favorite Pure Country, 6th and wide around the far turn 5 lengths out of it, rallied on the outside to win by 1 length over Darlinonthebeach in 1:49.3. It was a neck back to 4-1 third choice L A Delight third. 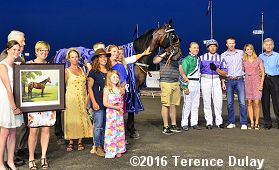 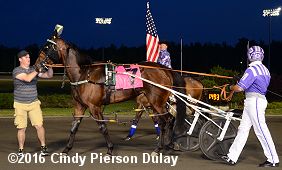 Left: Pure Country in the winner's circle. Winning owner-breeder Adam Bowen of Diamond Creek Racing said, "There is nothing better than owning and breeding, and then ending up winning one of these races like this. He [Brett Miller] was third-over coming off the final turn. She looked like she was full of pace and I was confident."

Right: Pure Country returns after the race. Winning driver Brett Miller added, "She can overcome a lot." This is her second win of the season and 12th lifetime, and increased her lifetime earnings to $1,178,953. 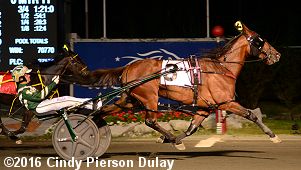 Innmediately before the North America Cup, the $370,000 Roses Are Red Stakes featured a field of 10 older pacing mares. Driver Yannick Gingras sent 17-4 second choice Lady Shadow to the front first time by and she clicked off fractions of 26.3, 54.1, and 1:21 while about 2 lengths in front of 10-1 Waasmula second. Lady Shadow held her advantage from gate to wire, winning by 1 1/4 lengths ove Waasmula in 1:48.1. It was another length back to 9-2 fourth choice Solar Sister third, while 3-1 favorite Anndrovette checked in 5th. 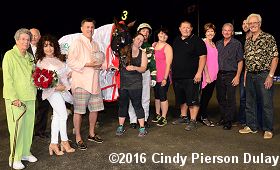 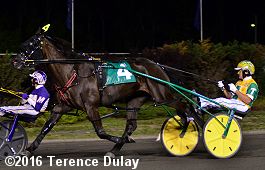 Left: Lady Shadow, who also won the race last year, in the winner's circle. Winning driver Yannick Gingras said, "Believe me I was surprised too that there was no speed on the outside. I watched a few of her replays and looked at her lines from last year and before that because I was actually thinking about racing her off the back, especially with the way the card has been playing out, the front hasn't been that good. Obviously she is better on the front, her lines show that, but when the gate folded nobody left so it made my decision easy."

Right: Fifth place finisher, beaten favorite, and winner of the race in 2012-2014, Anndrovette warms up before the race. 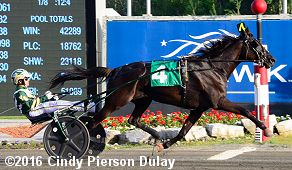 Kicking off the stakes action on Saturday, a full field of 10 faced the starter in the $267,000 Armbro Flight Stakes for trotting older fillies and mares. Driver Yannick Gingras sent 1-10 favorite Hannelore Hanover to the lead first time and she set fractions of 27.2, 56, and 1:24.1 while 2 lengths in front of 63-1 Stormont Kate and 42-1 Rockin with Dewey. Entering the lane Hannelore Hanover kicked it into gear, opening up by 5 1/2 lengths midstretch and finishing up 6 1/2 lengths in front of late-running 13-2 Shake it Cerry in a world-record tying 1:51, also a new stakes, track, and Canadian record. It was another 2 lengths back to 20-1 Rules of the Road third. 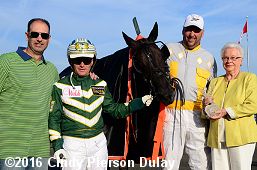 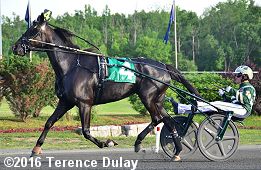 Left: Hannelore Hanover in the winner's circle. Driver Yannick Gingras said, "I knew she could go like that last week. She was totally wrapped up. I knew she had a couple big miles in her, that's for sure. She's fresh, and she's never been racing against the top, top horses, so she was always within herself. It was a scary mile tonight, but she still had more. I wouldn't put this mare quite yet in Mission Brief's category, but she's definitely a great replacement, I can tell you that. To hop on a mare like this, it's a lot of fun."

Right: Hannelore Hanover warms up before the race. 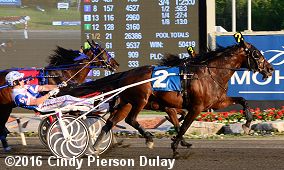 The $268,000 Goodtimes Stakes featuring a full field of ten 3-year-old trotters. 13-1 Will Take Charge was quickest away through an opening quarter of 27.4 before 1-2 favorite Dayson took over down the backstretch getting the half in 56.3 and 3/4 in 1:25. However, at the 3/16 pole Dayson broke stride and was taken inside the pylons by driver Yannick Gingras. 8-1 Marion Marauder, who had settled in 5th early, surged to take the lead at the 1/8 pole and held off Will Take Charge to win by 1/2 a length in 1:52.4. It was another 1/2 lenth back to 52-1 Blenheim third, while Dayson was officially distanced. 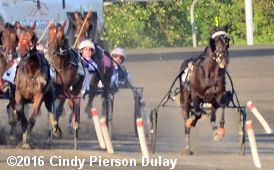 Left: Marion Marauder in the winner's circle. Winning driver Scott Zeron said, "I was confident in him so I pushed him out of the gate and I was able to land a spot where I saw John [Campbell] floating on the outside with [Tony Soprano]. So, I was happy to have that cover and finally be in the right spot—be within two lengths at the three-quarter pole, and he delivered."

Right: Last place finisher and beaten favorite Dayson breaking stride on the turn with driver Yannick Gingras in the bike. He has a record of 10 wins, 0 seconds and 0 thirds in 13 starts, earning $237,562 for owner-trainer Ron Burke and co-owners Our Horse Cents Stables and J and T Silva Stables. 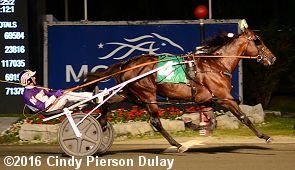 After 1 scratch, a field of 8 older pacers contested the $100,000 Mohawk Gold Cup Invitational. 78-1 longest shot Nirvana Seelster was loose on the lead through fractyions of 25.2, 53.2, and 1:20.2 while as many as 2 1/4 lengths ahead of 17-1 Evenin of Pleasure and 21-1 McWicked. Turning for home, 1-4 favorite Always B Miki, 5th early and parked wide around both turns, found another gear and ran by the pacesetters to win going away by 3 1/2 lengths in a new stakes, track, and Canadian record time of 1:47.1 It was another length back to Evenin of Pleasure third. The time was just 2/5 off the North American record for older pacers. 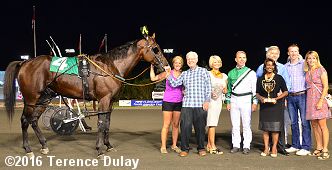 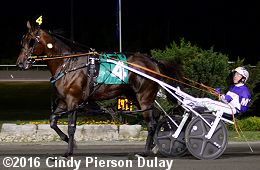 Left: Always B Miki in the winner's circle. Winning trainer Jimmy Takter said, "He's just an amazing horse, he doesn't get tired. We are not too far off (the world record) here tonight. I think tonight could have been the night."

Right: Always B Miki returns after the race with his new track record time on the teletimer visible behind him. 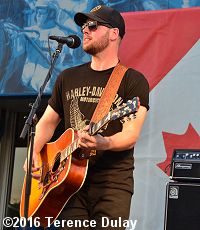 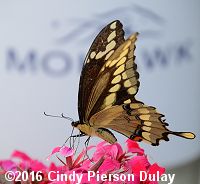 Left: Canadian country music artist Andrew Hyatt provided entertainment for the crowd at Mohawk. There were also a variety of contests including a free $1000 wager on the big race where the winner selected Betting Line, so he got a big pay-off.

Right: This butterfly enjoyed the flowers in the winner's circle during early part of the card.