The 29th running of the $1.5 million Pepsi North America Cup was contested on Saturday night at Mohawk Racetrack, the richest harness race in Canada, featuring the best 3-year-old pacing males in North America going the standard 1 mile trip around the 7/8 mile stonedust oval in Campbellville, Ontario. A full field of 10 lined up behind the starter under ideal racing conditions, a clear night with temperatures in the mid 70's and minimal wind and a lightning-fast track. Last year's Breeders Crown 2-year-old pace winner Sweet Lou was sent off as the 1-2 favorite, off wins in the Pennsylvania Sires stakes at Pocono and Meadows followed by his Cup elimination. In to challenge him included 5-1 second choice Warrawee Needy, second to Sweet Lou last week, and 8-1 third choice Thinking Out Loud, second in the Somebeachsomewhere Stakes followed by a third place finish in the eliminations.

Driver Jody Jamieson sent Warrawee Needy to the lead first time by and he set a stakes record pace of 25 1/5 and 52 4/5 while pressed by 17-1 A Rocknroll Dance, with Sweet Lou stalking the lead pair in third. On the far turn, Sweet Lou came out wide to challenge and took over the lead entering the stretch, getting 3/4 in 1:20 3/5. Sweet Lou had a 1 1/2 length advantage in mid-stretch, but the fast pace set the race up for the closers Thinking Out Loud and 9-1 Time to Roll were very wide on the far turn and passed the tiring favorite. Thinking Out Loud outfinished Time to Roll by 1/2 length in 1:47 4/5. It was a head back to 15-1 Dapper Dude third, and another 3/4 length back to Sweet Lou fourth. 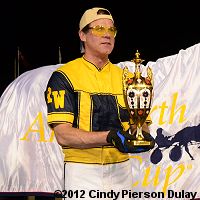 The winner's circle celebration for Thinking Out Loud. Winning trainer Bob McIntosh, celebrating his first North America Cup win, said, "I thought they were driving good up front. It worked out for us. It's a great field of horses. It always comes down to racing luck and luck was on our side. Randy drove great, John (Campbell) drove a fantastic race to finish third with Dapper Dude so it was a very exciting night. Randy and I go quite a ways back and Randy's dad Ronnie and I go way, way back. The Waples name is nothing but class. I am happy for Randy and I'm sure Ronnie is proud of him. It's just a great day." 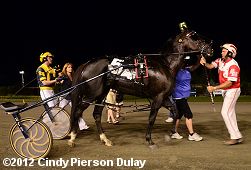 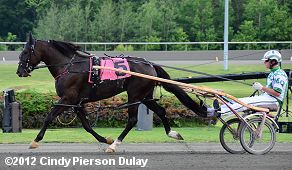 Left: Thinking Out Loud returns after the race. Winning driver Randy Waples said, "It's just an unbelievable feeling. It really is. I just drove a horse for a guy who's in every Hall of Fame in the world. He makes it so easy. His crew is unbelievable. He's been a great horse since the day that he set foot on the track. I was lucky enough to pick him up. I owe it all to Bob and his crew."

Right: Thinking Out Loud warms up earlier in the evening 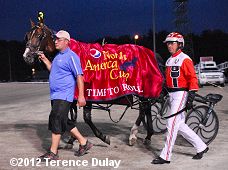 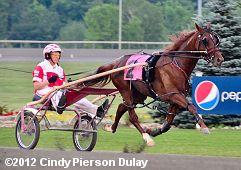 Left: Second place finisher Time To Roll heads out for the post parade. The 9-1 fourth choice raced sixth 13 lengths back early with driver Andy Miller, then closed on the far outside to get second beaten just 1/2 a length. The Jim Takter trainee improved his record to 3 wins, 2 seconds, and 1 third in 7 starts, earning $378,470 for owner Lothlorien Farm.

Right: Third place finisher Dapper Dude warms up earlier in the evening. Driver John Campbell said, "I thought at the head of the stretch that we had a legitimate shot to win, I was pretty sure I going to run down Sweet Lou, but I couldn't hold off the other two at the wire, but I was really happy with my colt. My horse is really progressing and showing that he can pace with the best horses in the world. History has shown that Bob’s horses get better as the year goes on, so I'm looking forward to it. It's going to be a great, competitive year." 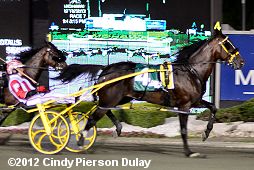 Left: Fourth place finisher and beaten favorite Sweet Lou shortly after the start of the race. Trainer Ron Burke said, "I thought he was alright tonight. Maybe he wasn't as good as we would have hoped, but at the same time I think it took a lot out of all three of us that were near the front. We'll go back to the drawing board and get him ready for The Meadowlands Pace. I still feel he's the best colt and I'm not going to panic over it. I said it before and I'll say it again that this is a great year and a super competitive bunch."

Right: The start of the North America Cup. 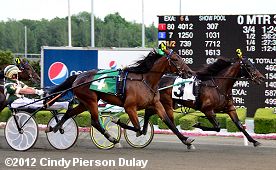 There were five other stakes races on Saturday night. Kicking off the stakes action on the North America Cup undercard was the $530,000 Elegantimage Stakes for 3-year-old trotting fillies. 14-1 Valdonna led first time by through an opening quarter in 27 3/5 before 7-1 Win Missy B took over, getting fractions of 56 2/5 and 1:24 2/5. Entering the stretch, 1-2 favorite Check Me Out, 3rd early, moved up to take over the lead, and was all out to hold off late-running 3-1 Maven to win by a nose in a new Canadian record time of 1:52 1/5. It was another 2 3/4 lengths back to Win Missy B third. 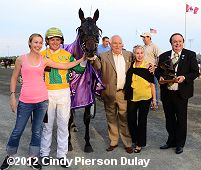 Winning driver Tim Tetrick said, "My mare kept fighting all the way to the wire. Give Maven tons of credit. She fought tooth and nail. It was a great horse race all the way down the lane. I wanted to make sure I got away close. I thought there might be a little more speed than there was. But the front two were setting enough pace. I was going to move to the front, but Brian (Sears, on Win Missy B) beat me to the punch. I was stuck first over. But around the last turn I got to get back in behind him for a little bit and braved my mare back up. She just trotted a heckuva last quarter to win the race in a very, very tight photo." 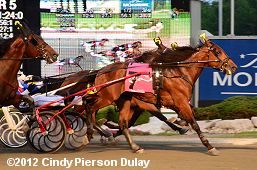 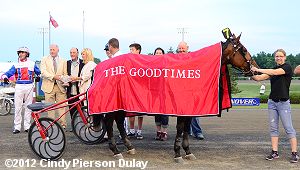 Beer Summit in the winner's circle. Driver Ron Pierce said, "I had the horsepower. It helps to have the horse that's good enough to win the race. The trip worked out really well. I floated him out of there off the seven-hole, fell into the four-hole, picked up some very good cover and tipped him off the cover's back just before we straightened up. Mike did his job, he had him up on his toes, and (Beer Summit) had plenty of trot to the wire." Trainer Mike Vanderkemp added, "I thought we had one of the best horses and we just needed a trip." 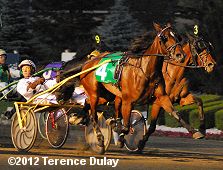 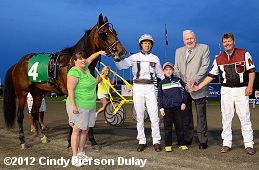 Pembroke Heat Wave in the winner's circle. Driver Brian Sears said, "I didn't go in with any set game plan, I was just looking to not gun out of there too hard, but get in the best spot I possibly could. With Action Broadway making a break, I didn't have to use her too hard and got away third. I thought she would be strong enough to pull first over and she was and I was able to get it done." 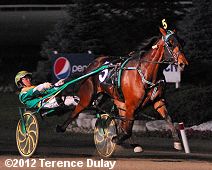 The $642,000 Fan Hanover Stakes is the distaff counterpart to the North America Cup, with a field of ten 3-year-old pacing fillies. 6-1 Romantic Moment led first time by but 4-5 favorite American Jewel soon took over, setting fractions of 26 2/5, 55, and 1:21 3/5 with Romantic Moment stalking her 1 3/4 lengths behind. Entering the stretch, the pair continued their procession, as American Jewel held off Romantic Moment by a length, getting the victory in a new world record time of 1:48 2/5. It was another 2 lengths back to late-running 5-1 Big McDeal third. 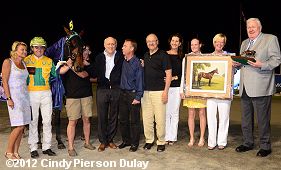 American Jewel in the winner's circle. Driver Tim Tetrick said, "She did a lot of work tonight; she was right on the front and worked hard to get there. She's just an awesome filly, my favourite, and she can carry her speed a long, long way. I wanted to have the four hole because she likes to be able to float out of there and get positioned. She's such a high-speed filly that you don't want her locked in. I wanted to give her every chance possible to win tonight." 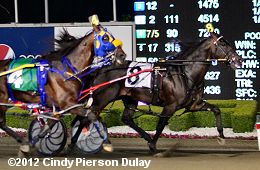 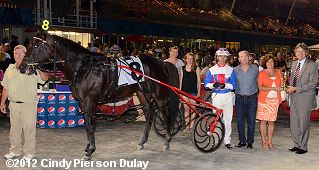 We Will See in the winner's circle. Trainer Sam De Pinto said, "He's starting to get into his form and everything went good. He had to come first up, but he likes that kind of a trip. Betterthancheddar raced super, he followed us I think the whole way and it was pretty close. They're all good horses, you can't take nothing away from any of them. If I had to put my finger on anybody it would be Betterthancheddar and Mark Harder's horse Golden Receiver. I thought those two were probably the toughest ones in the race. I would have liked to work out a trip behind them, but it didn't work out that way. But we still got the job done. He did what he had to do. He's a tough horse, he knows how to win."