The 26th running of the $1.5 million Pepsi North America Cup was contested on Saturday night at Mohawk Racetrack in Campbellville, Ontario, the richest pacing event in the world, featuring the best 3-year-old pacing males in North America going the standard 1 mile trip around the 7/8-mile oval. A full field of 10 lined up behind the starter on an ideal night for harness racing, with no wind, low humidity, and the temperature around 70 when the feature went to post. Keep It Real, winner of 6 straight including the Burlington Stakes before losing his elimination heat by 1/4 length last week, was sent off as the 9-5 favorite over 3-1 second choice Well Said, who defeated Keep It Real in the eliminations after finishing 4th in the Burlington. Dial or Nodial, winner of his elimination after finishing third in the New Jersey Classic was the 7-2 third choice on the board.

Driver George Brennan sent 7-1 fourth choice If I Can Dream to the lead first time past the stands and he got the initial quarter mile in 26 seconds, while 1 3/4 lengths ahead of 13-1 Mr. Wiggles in second. Entering the backstretch, driver Steve Condren sent Keep It Real, who was parked wide on the clubhouse turn, up to the front to set the pace, getting the half in 54 3/5 and 3/4 in 1:22, with Dial or NoDial and If I Can Dream giving chase. Keep It Real led the field to the top of the stretch, but Well Said and driver Ron Pierce, who sat back in 6th early and wide around both turns, found room between horses and came through to take over the lead at the 1/8 pole. Well Said drew off late to win going away by 3 1/4 lengths in a new stakes, track, and Canadian record time of 1:48 1/5 over the fast track. 8-1 Art Colony rallied from 7th early to nose out pacesetter and favorite Keep It Real for second place money.

Winning driver Ron Pierce said, "He sure was (awesome). I wasn't worried about him. I was worried about myself. The trip was absolutely perfect. You couldn't have sat down before the race and drew a map of how you'd like the race to go and have it come out any better than that. He could have went (faster), this colt. He went pretty handy. Stevie (Condren with Keep It Real) still had some horse up front. Brian (Sears with Dial Or No Dial) took me as far as he could. I just easily tipped him out, yet hung onto him at the same time and didn't let him pace until we hit the head of the stretch." 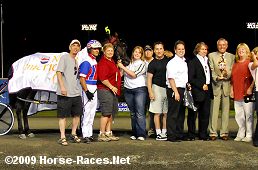 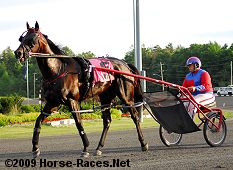 Left: Well Said in the winner's circle. Co-owner Jeffrey Snyder said, "Never (get tired of winning the race). It's like brand new. It's always the same kind of pressure, jubilation. We get a lot of satisfaction when we pick a horse out as a yearling, race him as a two-year-old and come back like this. The North America Cup to us is like the major race in harness racing, as far as we're concerned, since we primarily have pacing colts. We love coming up here. We love the people. We love the track and we love the Canadian dollar. The race went according to plan. Ronny (Pierce) wanted to race off a helmet. He said to me last week, if I can follow a horse, I'm going to be able to come home in 25 seconds. And I think that's what he did. He came home in 25 4/5."

Right: Well Said warms up earlier in the evening. Co-owner Susan Grange (Lothlorien Stables) said, "It's very exciting, especially after my mother (Audrey Campbell) winning it twice before with two other horses. So it's a little extra special for us today. He was (awesome), but a horse race is a horse race and it can change at the last minute. When he started to move forward, I had my fingers crossed." 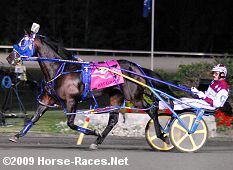 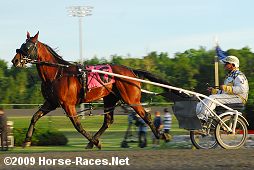 Left: Second place finisher Art Colony in the post parade. His trainer Casie Coleman said, "It was absolutely awesome. I couldn't be any happier with him. He was huge, monstrous. The way he's been, he's been fighting sickness for the past 3 or 4 weeks and I haven't been able to train this horse properly. The way he just came back and paced that mile, I'm thrilled with him. Hopefully now he's back on track. This was the first stepping stone of a major stakes season. He'll be at the Meadowlands Pace."

Right: Third place finisher Keep It Real warms up earlier in the evening. His driver Steve Condren said, "It was a really nice effort for a green colt. We couldn't have expected more of him. Well Said went that final quarter in 25 4/5, so we must've gone in 26." 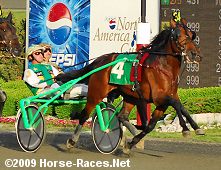 There were four other stakes races on Saturday night. Kicking off the stakes action on North America Cup day was the $333,200 Goodtimes Trot for 3-year-old trotters. 7-1 Southern Rocketop led the field first time past the stands and around the clubhouse turn through a quarter in 27 4/5,, before 1-2 favorite Federal Flex took over the lead on the backstretch. With driver Jody Jamieson in the bike, he rattled off fractions of 57 2/5 and 1:26 3/5 into the lane. 43-1 longshot Truth In Action put in a strong rally late but Federal Flex hung on to win by just 1/4 length in 1:54 2/5. It was another 1/4 length back to 70-1 And Heez Perfect third.
Results chart Race 3 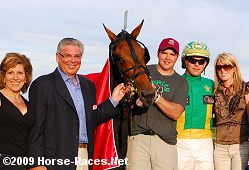 Federal Flex in the winner's circle. Winning driver Jody Jamieson said, "It's real difficult to be disappointed in the horse when you pick up $150,000. But I'm a little disappointed. He came home in 27 4/5 but he's a better horse than that. Usually, he doesn't want any horses near his bridle. It was nip and tuck to win tonight. I had to get into him pretty good. I hate doing that because he's not the type of horse you need to urge on. So, something's going on with him. (Trainer) Jeff (Gillis) noticed that right away. But he dug in, got the win and that's what champion horses do." He will go next in the Stanley Dancer at the Meadowlands and hopefully on to the Hambletonian. 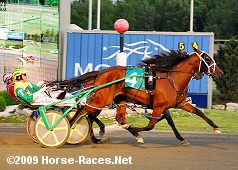 The $680,000 Fan Hanover Stakes is the distaff counterpart to the North America Cup, featuring 3-year-old pacing fillies. 3-5 favorite Yellow Diamond set the pace of 27 3/5, 56, and 1:23 while as many as 2 1/4 lengths in front. She led the field to the 1/8 pole but 3-1 second choice and stablemate Not Enough and driver Tim Tetrick, who stalked her the whole way, moved up to challenge and outfinished the favorite by a neck in a new track, stakes, and Canadian record time of 1:50. It was a long 4 3/4 lengths back to late-running 10-1 Shacked Up third, completing a sweep of the top three places for trainer Tracy Brainard and owner Bulletproof Enterprises.
Results chart Race 6 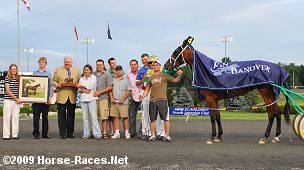 Not Enough in the winner's circle. Winning trainer Tracy Brainard said, "We thought a lot of Yellow Diamond. She paced in 1:49 down in Pocono (in the Lynch Stakes) so we knew she was really good. We were really happy with Not Enough after her performance down at Yonkers in the Lismore, so we definitely knew she had the potential to beat Yellow Diamond. We left it up to (Tim Tetrick) and let him drive her the way he felt fit." 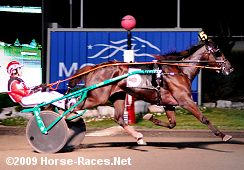 Closing out the stakes action was the $561,500 Elegantimage Stakes for 3-year-old trotting fillies. Driver Steve Condren sent 4-5 favorite Windsong Soprano to take over the lead from 6-1 Elusive Desire entering the backstretch to set fractions of 57 4/5 and 1:27, with 7-1 Celebrity Juliet pressing the pace to her outside the whole way. Windsong Soprano led the field into the stretch, but 12-1 Celebrity Deville, who was 5th early and parked wide, closed with a rush to pass the tiring favorite late to win by 2 1/4 lengths over late-running 4-1 Raising Rachel in 1:54 3/5. It was another 3/4 length back to Windsong Soprano third.
Results chart Race 9 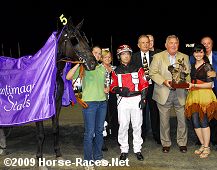 Celebrity Deville in the winner's circle. Winning driver George Brennan, who drove the filly for the first time, said, "I didn't know anything about her. On the way to the track (trainer) Staffan Lind gave me a call and gave me a little input on her, and that's pretty much all I knew. I thought she had a shot. We got a perfect trip and she responded off it. She was trotting pretty strong (in the stretch) and there was no doubt in my mind (that we had it won)." 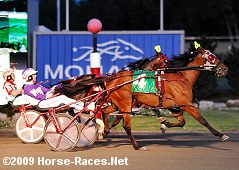