The $1.5 million Pepsi North America Cup is the richest harness race in Canada. Celebrating its 25th running this year, this 1 mile trip around the 7 furlong limestone oval at Mohawk Racetrack in Campbellville, Ontario, is always a preview for the year's Pacing Triple Crown and features the top 3-year-old pacing colts on the continent. Racing conditions were ideal on Saturday night, with temperatures in the 70's, clear skies, no wind, and a fast track. As expected, the undefeated Somebeachsomewhere was sent off as the 2-5 favorite in the full field of ten, exiting his elimination win after winning the Burlington at Mohawk. In to challenge the son of Mach Three was 6-1 second choice Badlands Nitro and 9-1 third choice Art Official, with the rest of the field at double digits. After Big Brown's defeat in the Belmont last Saturday, many were wondering if Somebeachsomewhere would suffer the same fate, as he too was going into his big race undefeated but also with foot problems.

The huge crowd in the winner's circle with Somebeachsomewhere. Winning trainer and co-owner Brent MacGrath said, "He raced great. That foot's still a bit of an issue. He's going to have a couple of weeks now before he really does anything. I did train him a little bit this week. The money was on the line. And I wanted to make sure he didn't get a little short on the end. He paced right through the wire. Paul drove him perfect. He wasn't worried about any track records, any Canadian records. He was worried about winning this race. Paul hasn't won this race, until tonight." Somebeachsomewhere will start next in the Meadowlands Pace eliminations. 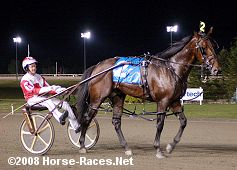 Somebeachsomewhere parades after the race. Winning driver Paul MacDonell, celebrating his first Cup win, said about the crowd's roaring ovation as Somebeachsomewhere cruised to the wire, "It sends chills up my spine. I could feel everyone behind us and supporting leading up to this week, everybody in the country. and in the United States just love this horse. He's the whole show. Once he got to the half in 54 4/5, he was pretty much on air. He got the breather he needed. I just left him pace down the lane and he just loved to stretch out." 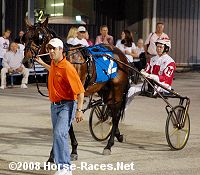 Somebeachsomewhere comes out of the paddock before the race. When asked about comparisons between his horse and the great Niatross, trainer Brent MacGrath said, It's makes me feel good. It's a different era. Niatross won a lot more races, but he went a lot of miles in 1:55, :56, :57 and 58 even. This horse isn't going to get that opportunity. Every time he goes to the gate, it's going to be in 1:50 and it's not going to get any easier for him. So, he's not going to have 25 races in him. It's harder. Not taking anything away from Niatross, not even comparing the two. It's a different era. It's the same as trying to compare hockey players or any other athletes. It's a tough thing to do." 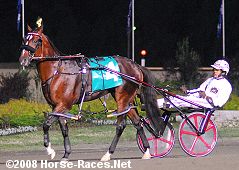 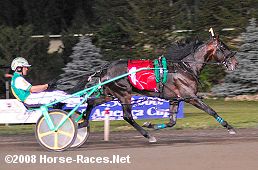 Left: Second place finisher Badlands Nitro in the post parade. Driver Brian Sears said, "My horse put in a great effort and was still pacing at the wire. He tried his heart out and you can't take anything away from him. I felt my colt was very competitive in there. Got kind of beat out of the gate a little bit. Ended up in the three-hole. Didn't want to overdrive my horse. But the fractions were kind of soft and I was able to get out late and take a run at (Somebeachsomewhere)." 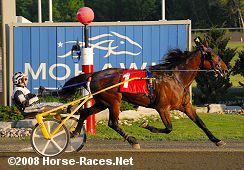 There were four other stakes events on the Cup undercard. The first of these was the $279,786 Goodtimes Stakes for 3-year-old trotters. 5-2 second choice Clerk Magistrate battled on the front end to the outside of 10-1 B Strike Three through a half in 57 2/5 and 3/4 in 1:25, then pulled away through the stretch to win by 4 1/2 lengths over 68-1 Guida Muscle. 9-10 favorite Windsong Espoir failed to rally and finished fifth. However, Guida Muscle was disqualified and placed fifth for failing to continuously lose ground after breaking stride in mid stretch.
Results chart Race 3 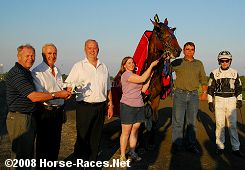 Clerk Magistrate in the winner's circle. Winning owner-trainer Per Henriksen said, "He's got three weeks now before the Stanley Dancer, and then the Hambletonian after that. Last week I could tell he was on the right way, he kicked home in 26 3/5 last week (in the elimination). Today he had to go the hard way and he proved to be the best. I don't think we've seen the best of him yet. I told Trevor to trust the horse and see what he can do."

Driver Trevor Ritchie added, "It was a way different trip from last week, which wasn't what I wanted. I was planning to get away mid-pack but it didn't turn out that way. I honestly didn't know what (Clerk Magistrate) had left, but I knew I hadn't kicked the (ear)plugs on him so I hoped he'd respond this week like he did last week. He proved he's the best of the group up here, coming first up like that you have to put him near the top of the class." 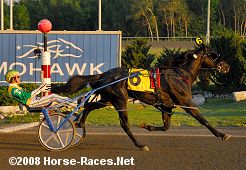 The $100,000 North America Cup Consolation features horses that did not qualify for the rich final. 8-5 favorite Upfront Hannahsboy was parked out for the first 3/4 mile, 5 lengths off the pace set by 5-1 Lonestar Legend, then took over the lead at the 3/16 pole and drew off to a 5 3/4 length win over 35-1 Space Walk in a new stakes record time of 1:49 2/5. It was another length back to 7-1 Trade Editor third.
Results chart Race 4 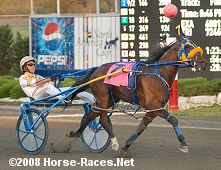 The $733,031 Fan Hanover Stakes is the distaff counterpart to the North America Cup, featuring a field of ten 3-year-old filly pacers. 10-1 Chancey Lady settled in third behind 5-1 pacesetter A and Gs Confusion through fractions of 56 4/5 and 1:23 4/5, then closed with a rush to get up by a head over late-running 11-1 Artimittateslife in 1:51 1/5. It was another 1 1/4 length back to 1-2 favorite Tug River Princess, who came into the race a perfect 13-for-13 but suffered her first career loss.
Results chart Race 6 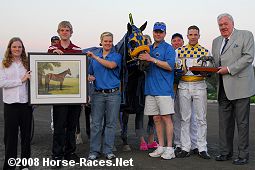 Chancey lady in the winner's circle. Winning driver Mark MacDonald said, "We were pretty fortunate (to draw in). I was pretty disappointed last week when I was third and got lucky to draw (in). I actually had every intention of leaving a little more with her last week, but she got a little rough on me behind the gate. She was coming off a real tough mile, 52 and first over. I felt pretty good (turning for home). I knew those good fillies were coming. She's got such a great kick to her that when I came off the helmet, she just puts them away." 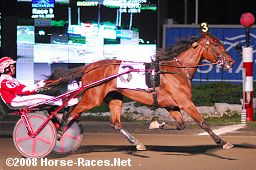 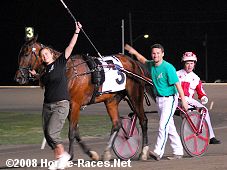 Closing out the stakes action was the $588,706 Elegantimage Stakes for 3-year-old filly trotters. 9-10 favorite Lantern Kronos settled in third about 3 lengths off the pace set by 4-1 Warrawee June and 7-1 Prada Hall. On the far turn, driver Paul MacDonell asked Lantern Kronos to move up to the front and she took over easily, opening up a 3 3/4 length lead in mid stretch after 3/4 in 1:25 4/5. Warrawee June tried to rally again but was left with too much ground to make up as Lantern Kronos cruised under the line 1 3/4 lengths in front in 1:54 3/5. It was another 1 1/2 lengths back to 3-2 second choice Saorse in third.
Results chart Race 9