The $1.5 million Pepsi North America Cup at Woobine is the richest harness race in Canada and always draws the best 3-year-old pacers from both the US and Canada. A full field of ten lined up behind the starter, with Feelin Friskie sent off as the heavy 9-10 favorite over 7-2 second choice Total Truth. Contestants and spectators had to contend with temperatures in the high 80's as well as a very strong headwind in the stretch.

At the start, 19-1 shot Doonbeg and 89-1 longest shot Impeccable both broke stride taking them out of contention right away. Driver Paul MacDonell took 7-1 shot Jeremes Jet to the front and he was loose on the lead through a quarter in 26 1/5 and a half in 54 2/5, while a length and a half clear of the pack. Rounding the far turn, Jeremes Jet still had the lead through 3/4 in 1:21 2/5 and he looked home free in mid-stretch with a 1 3/4-length advantage. However, the favorites were closing with every stride, with Total Truth taking a four-wide far turn and then driving by the pacesetters to the front, holding off the late run of Feelin Friskie to prevail by a length in a time of 1:49 1/5 over the fast track. It was another 1/2 length back to 55-1 outsider Fox Valley Tribal in third. 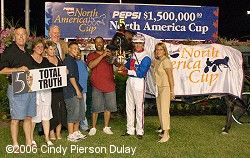 The trophy presentation in the winner's circle. Winning trainer Brenda Teague said, "Right from the start, I thought (Total Truth) would be good. He matured real well (over the winter), matured out of the soreness problems he had as a two-year-old. He'll probably go next to the Meadowlands Pace (July 15)." 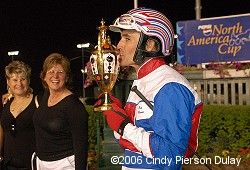 Driver Ron Pierce kisses the trophy while the owners look on. It was the first North America Cup wins for Pierce who said, "(The trip) was absolutely perfect. We had good, live cover the whole mile. This horse got a perfect trip and had a full tank. I didn't even see the fractions. I was just sitting there with a ton of horse. When I got away on Mr. (John) Campbell's back, I was licking my chops the whole way. It was smooth sailing, a nice, smooth trip." 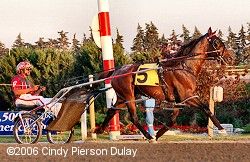 Total Truth warms up earlier in the day. 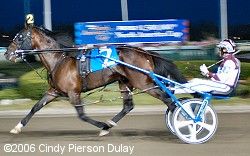 Second place finisher and beaten favorite Feelin Friskie in the post parade. His driver John Campbell said, "The effort (by Feelin Friskie) was great. He raced very well, he just got outkicked by Total Truth tonight. You're always disappointed when you finish second. The trip worked out okay. I didn't really know what to expect. I was second over around the last turn. He gave me a run and that was good but Total Truth had more run." 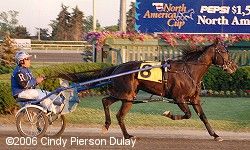 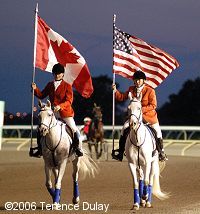 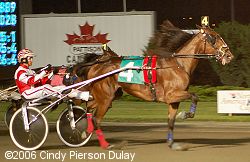 There were two other stakes events on the undercard. The $559,200 Elegantimage Stakes featured 3-year-old trotting fillies. After 3-5 favorite Buck I St Pat broke stride at the start and was out of contention right away, the race was set up for longshots. 10-1 Bee Line sat in sixth tracking the early pace of 7-2 second choice Oaklea Odessa, then charged up through the stretch to prevail by 1 1/2 length over 35-1 Armbro Domino in a time of 1:54 4/5. It was another 3/4 lengths back to 60-1 longest shot KD Girl in third.
Results chart Race 9 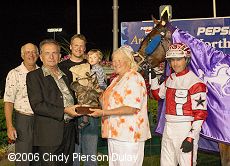 The happy connections in the winner's circle. Winning driver Luc Ouellette said, "My tactics were to follow (the favorite) but when she broke, obviously that went out the window. But I thought it made the race more even. She's very versatile. I just thought going those type of fractions, we were going to better off coming from behind. I was very confident (turning for home). I moved early on the turn. She was well within herself. This filly is only going to get better, I believe." 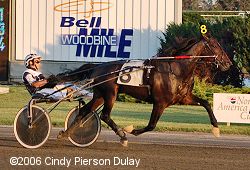 Kicking off the stakes action on Saturday was the $280,600 Goodtimes Stakes for 3-year-old trotters. 3-1 third choice Majestic Son took the lead right away through easy fractions of 27 4/5, 57 3/5, and 1:25 1/5 and then easily drew away from the pack through the stretch to win by 3 1/4 lengths over 5-2 second choice Glidemaster in a career-best time of 1:53 2/5. It was a long 4-length gap back to 111-1 longest shot Lovin Every Moment in third. 9-5 favorite Algiers Hall broke stride at the start and finished a "distanced" seventh.
Results chart Race 3 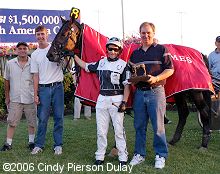 The happy connections in the winner's circle. Winning driver Trevor Ritchie said, "He really did (bring his A game). I've got to give all the credit to (trainer) Mark Steacy and his crew. There were some problems with this horse. They worked hard and long on him. They made some changes and did the right thing. It's (the win) very impressive, but it's not surprising. I had a lot of confidence in this horse. I just hoped Mark could get him right. And I knew that if he could, he'd go a big trip and he did. He worked on his feet. His feet are a little bit of a problem so he changed his shoeing. And he did some other little tinkering with his gear."