The 28th running of the $1.5 million Pepsi North America Cup was contested on Saturday night at Mohawk Racetrack, the richest harness race in Canada, featuring the best 3-year-old pacing males in North America going the standard 1 mile trip around the 7/8 mile stonedust oval in Campbellville, Ontario. A full field of 10 lines up behind the starter on a clear night with temperatures in the lower 70's. Pennsylvania Sires Stakes winner Big Bad John was sent off as the 9-5 favorite of his elimination win last week, over top local hope and 2-1 second choice Up The Credit, winner of the Somebeachsomewhere Stakes before taking his elimination heat, and 9-2 third choice Shadyshark Hanover, third in the Somebeachsomewhere and then second in his elimination. 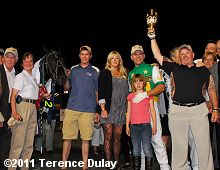 The winner's circle celebration for Up The Credit. Winning driver Jody Jamieson, celebrating his second North America Cup win, said, "It's unbelievable. All I've got to say is Happy Father's Day, Dad!  I've been here before, but it's an unbelievable feeling to get this for him. It's such a tough race to win, especially for a Canadian trainer. (Up The Credit) is just an amazing horse.  He's been proving it all along.  I'm so happy for everybody. I said (at the post position draw), my horse, on the lead, first-over, second-over, it didn't matter. I just needed to have a little bit of luck and make sure he was good.  Dad had him great all week.  The horse was fabulous.  I mean, first-over in 1:49 3/5 That's some kind of trip." 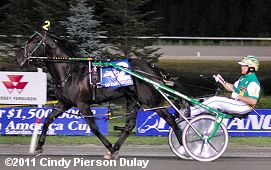 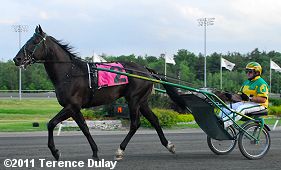 Right: Up The Credit warms up earlier in the evening with trainer and co-owner Carl Jamieson driving. Jamieson, father of driver Jody, said of his first North America Cup win, "Last year, I knew he was a good horse.  We just had to wait on him.  Second time out last year in: 51 and change.  He's a lovely horse.    He loves his job.  Nothing bothers him.  And he can go fast. I honestly thought I was the horse to beat. I thought he was the best horse in the race. I was a little bit worried coming first up.  I really was.  But he just kept coming and coming.  He loves to win.  So it's great." 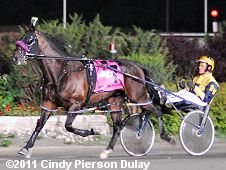 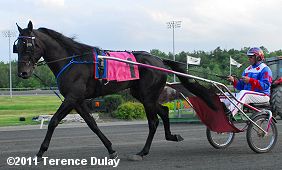 Left: Second place finisher Roll With Joe in the post parade. His driver Randy Waples said, "Every time you finish second you think there is something you could have done to win. I was hoping at some point I could get my horse back on the front because I thought he was ready to go a big mile on the front right now. At the end of the day, I couldn't be happier."

Right: Third place finisher Big Jim warms up earlier in the evening. The 5-1 fourth choice raced 6th early with driver Phil Hudon, then closed late to get third beaten 1 3/4 lengths at the line. The James Dean trainee improved his record to 8 wins, 2 seconds, and 4 thirds in 15 starts, earning $1,265,080 for owner James Carr. 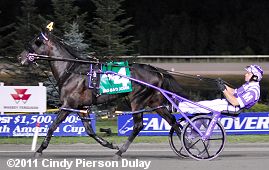 Left: Fifth place finisher and beaten favorite Big Bad John in the post parade. His driver Brett Miller said, "Big Bad John wasn't himself. At the half I knew I was in trouble. When the gate folded and no one was leaving, I was loving it. When I got away third, I thought this was perfect, then I took the lead and thought everything was great." 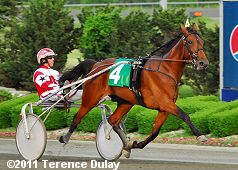 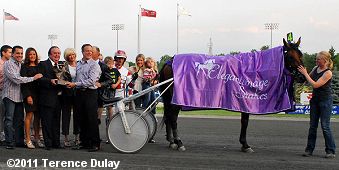 There were five other stakes races on Saturday night. Kicking off the stakes action on the North America Cup undercard was the $519,000 Elegantimage Stakes for 3-year-old trotting fillies. 60-1 longest shot Eagle Canada led through a half in 57 1/5 before 3-10 favorite Crys Dream took over going wide on the far turn. Crys Dream got 3/4 in 1:25 3/5, opening up a 3 3/4 length lead in mid-stretch, and easily held off late-running 4-1 second choice Beatgoeson Hanover to win by 2 1/2 lengths in 1:53 2/5. It was another length back to 15-1 Lady Rainbow third. 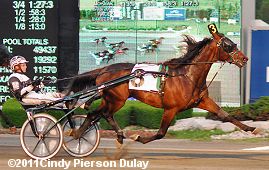 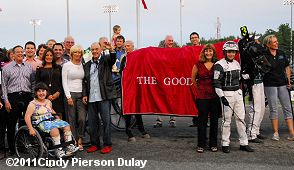 Blue Porsche in the winner's circle. Winning driver Trevor Ritchie said, "I know he's got tremendous speed. I have all the confidence in the world in him. I thought as long as I could get up reasonably close by the 3/4 they would have to go something to beat me. He's a real professional. He can get out of there if you want, he can cut it, he can come from the back, he can come first up like he did tonight. He can just do it all." 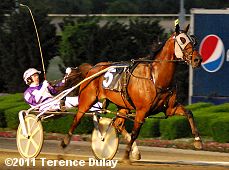 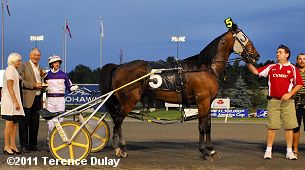 Won the West in the winner's circle. Winning driver David Miller said, "That was definitely an improvement. I wasn't going for the track record, but the horse actually raced better last week and showed signs of improvement - I know he hasn't been racing great this year - so I kind of made up my mind tonight to test him a little bit. He got a big half and when he cleared like that I just let him keep rolling and he did the rest." 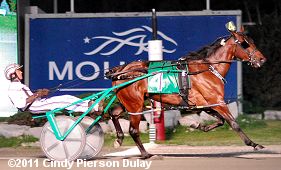 Closing out the stakes action was the $601,000 Fan Hanover Stakes, the distaff counterpart to the North America Cup, with a field of ten 3-year-old pacing fillies. Driver Brian Sears sent 1-4 favorite See You At Peelers to the lead on the clubhouse turn and she set fractions of 27 2/5, 55 3/5, and 1:23 2/5 while as many as 1 3/4 lengths in front of 19-1 Idyllic stalking her in second. Through the lane, See You At Peelers drew off to win by 3 lengths over 3-1 second choice Krispy Apple in a stakes record time of 1:50. It was another 1/2 length back to Idyllic third. 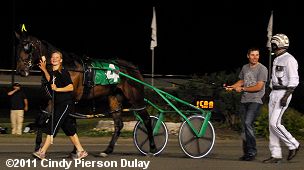 See You At Peelers returns after the race. Winning driver Brian Sears said, "She did really good at minding her own business until (Krispy Apple) came at her first over. I knew that horse was the horse to beat and she'd be coming pretty soon, but (See You At Peelers) pretty much picked it up when she heard her coming and took off from there." Asked about the possibility of See You At Peelers taking on males in the Little Brown Jug, Sears added, "It's not really a stretch. The boys are knocking heads pretty good and she's been kind of beating up on the girls pretty easy. Come Jug time, hopefully the boys will be a little ragged by then." 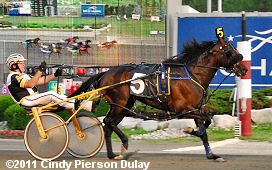 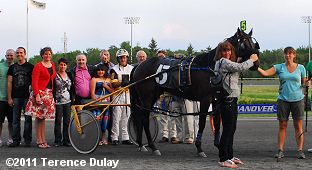