The 32nd running of the $1 million Pepsi North America Cup, the world's richest pacing event, was contested on Saturday night at Mohawk Racetrack featuring the best 3-year-old pacing males in North America going the standard 1 mile trip around the 7/8 mile stonedust oval in Campbellville, Ontario. A full field of 10 lined up behind the starter under ideal conditions, partly cloudy skies, minimal wind, and temperatures in the high 60's. Wiggle It Jiggleit was sent off as the 2-5 favorite, a perfect 10 for 10 lifetime including the Indiana Sires Stakes at Hoosier Park. In to challenge him included 5-1 second choice In The Arsenal, winner of 5 straight including the Art Rooney at Yonkers, and 11-2 third choice Wakizashi Hanover, winner of his Cup elimination after finishing a close second in the Pennsylvania Sires Stakes at Harrah's Philadelphia.

Driver Montrell Teague sent Wiggle It Jiggleit to the lead first time by and he set quick fractions of 25.1, 53.3, and 1:21 while as many as 2 1/4 lengths ahead of Wakizashi Hanover with driver Tim Tetrick stalking him second. Entering the lane, Wiggle It Jiggleit continued to lead, but inside the final furlong Wakizashi Hanover ran him down to win by 3/4 length in 1:48. It was another 2 1/4 lengths back to late-running 37-1 Betting Exchange third. 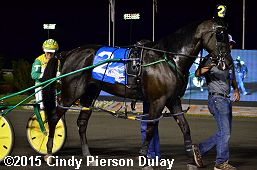 Left: The winner's circle celebration for Wakizashi Hanover. Co-owner Bruce Kennedy said, “We’re living a dream. Three of the six people (in Tri-County Stable of Truro, Nova Scotia) are brand new owners, never owned a horse before. What a way to start a career. Now they’re hooked, I hope. We’ve got a great trainer in Joann Looney-King and her husband, Jim, and we have a great relationship. We’re all small time operators. I don’t know how you get Tim Tetrick as a driver but we did. We had the package coming in.”

Right: Wakizashi Hanover parades after the race. Winning driver Tim Tetrick said, “It worked out perfect. I got to follow (Wiggle It Jiggleit) and the horse did the rest. My horse tipped and we got the job done. He’s a nice colt. The connections have done a great job with him. I appreciate them letting me drive the horse. He’s versatile. He’s a good horse and he’s got tons of speed.” 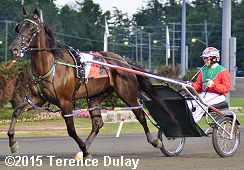 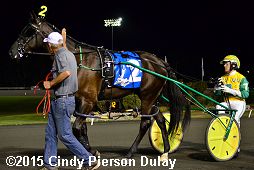 Left: Wakizashi Hanover warms up earlier in the evening. Winning trainer Joann Looney-King said, “Everybody was saying we weren’t good enough. They didn’t pick us. It’s just overwhelming to show people that this is as good a horse that we thought he was. (Wakizashi Hanover) knew he was going to be good.”

Right: Wakizashi Hanover in the post parade. He is named after a wakizashi, the smaller of the two swords an ancient Samurai warrior was allowed to carry. This was the sword which a Samurai would use if he had to commit seppuku (ritual suicide). 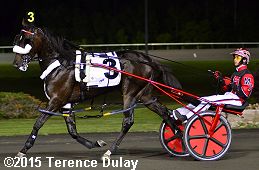 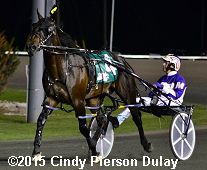 Left: Second place finisher and beaten favorite Wiggle It Jiggleit warms up before the race. The 2-5 favorite set the pace with driver Montrell Teague but was outfinished in the final 1/16. The Clyde Francis trainee improved his record to 11 wins and 1 second in 12 starts, earning $417,242 for owner George Teague Jr.

Right: Third place finisher Betting Exchange warms up before the race. The 37-1 shot raced in 5th about 7 lengths off the pace with driver Dave Miller, then rallied to get third beaten 3 lengths. The Tom Fanning trainee improved his record to 3 wins, 3 seconds, and 3 thirds in 13 starts, earning $299.188 for owners Howard Taylor, Susan Kajfasz, and Tom Fanning. 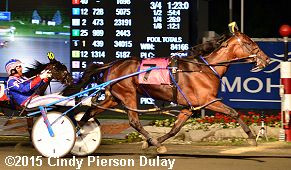 There were six other stakes races on Saturday night. The $479,000 Fan Hanover Stakes is the distaff counterpart to the North America Cup, with a field of ten 3-year-old pacing fillies. 6-1 Wrangler Magic was quickest away through an opening quarter of 26 seconds before 2-1 Sassa Hanover took over on the clubhouse turn through fractions of 54.4 and 1:23. Sassa Hanover led to the 1/8 pole before tiring, as Wrangler Magic came back late to win by 1 3/4 lengths over 113-1 longshot The Show Returns in 1:50.2. It was another 1/2 length back to 12-1 Solar Sister third, while even-money favorite JK Shesalady checked in fifth. 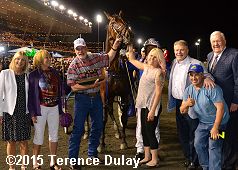 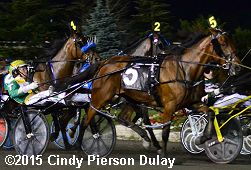 Left: Wrangler Magic in the winner's circle. Winning trainer Stephane Larocque said, "(Wrangler Magic) showed it last year at the end of the year, she started coming on really good. Yves Filion did just an amazing job (developing Wrangler Magic) to get her to be so good and sound this year and right now she’s awesome.” 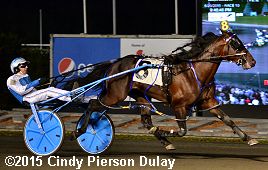 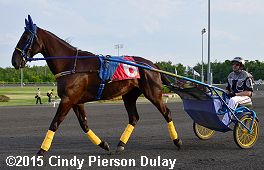 Left: State Treasurer in the winner's circle. Winning driver Chris Christoforou said, "I can't get too far back with him, I like to race him from the middle if I can. He's fearless first over, and basically with any trip he's fearless, so I wasn't worried about that as much as if he could get his head in front at some point like he did in London down the backstretch. Once he gets his head in front, he's tough to beat. We got there and he just took off." 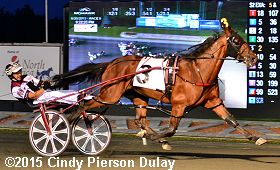 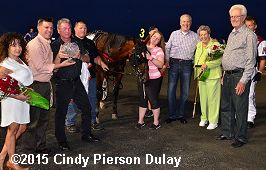 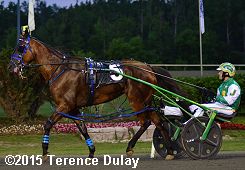 Left: Lady Shadow in the winner's circle. Winning driver Doug McNair said, “I wasn’t sure who was going to take a stab (at the front). I figured (driver) Timmy (Tetrick, driving Anndrovette) would be coming out of there. I kind of let her settle then put her in front. She kind of did the rest on her own. I had a good mare (Colors A Virgin) first up (around the far turn). Never want to let her get too close. I figured I’d just let her rock from the 3/4 pole and she paced away from them. She’s come along from two to three, now three to four. She’s just getting better every year. It was great to get this win. I think I’ve been second or third in this race before. It’s a big thrill for me to win it.” 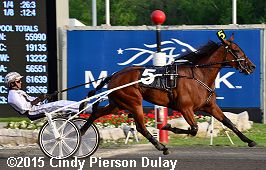 A full field of 10 faced the starter in the $272,000 Armbro Flight Stakes for trotting older fillies and mares. Bee A Magician was the 3-10 favorite over 7-2 Shake It Cerry and 10=1 Classic Martine. Classic Martine set the pace of 26.3 and 56.4 while stlked by Shake It Cerry. On the far turn, Bee A Magician, 4th early, came out wide to pass the pacesetters, and quickly opened up a 6 length lead. Kept to task by Brian Sears, she cruised to a 4 3/4 length win oer 27-1 Charmed Life in 1:51.4. It was another 1 1/4 length back to Classic Martine third. 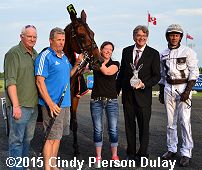 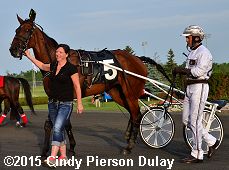 Left: Bee A Magician in the winner's circle. Winning trainer Richard Norman said, “She’s in a really good little groove. Haven’t done much with her between races. It seems to really suit her. She’s thriving. I think she’s getting better. We’ll give her a couple of weeks off then go to the Meadowlands.”

Right: Bee A Magician parades after the race. Driver Brian Sears said, “I just let the race come into its own, just playing it by ear. She raced so good first-over last week I wasn’t going to try to move her hard to the front. I got away in first-over position and she did the rest. I’m just thrilled to get the opportunity to drive a great mare like that. She’s one of the top horses I’ve gotten the opportunity to drive." 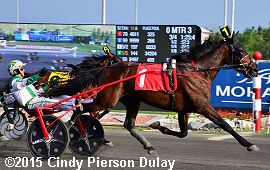 Kicking off the stakes action was the $233,000 Goodtimes Stakes featuring a full field of ten 3-year-old trotters. Canepa Hanover was the prohibitive 1-5 favorite over 3-1 French Laundry, with the rest at longshot odds led by 31-1 Rubber Duck. Rubber Duck was quickest away through opening fractions of 27 seconds, and 57.3 while pressed by 59-1 Covert Operative and French Laundry, with Canepa Hanover stalking them in fourth. Approaching the 1/2 mile pole Canepa Hanover broke stride and finished a distant last, as French Laundry led into the stretch through 3/4 in 1:25.4. However, French Laundry also broke stride, setting the stage for boxcar payouts. Covert Operative inherited the lead but 76-1 Hemi Seelster, fifth early, rallied to win by 1 1/4 length over 35-1 The Bank in 1:54. It was another neck back to Rubber Duck third to complete the almost $9000 trifecta for $1. 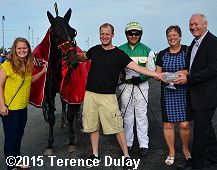 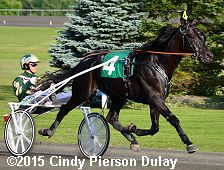 Left: Hemi Seelster in the winner's circle. Winning driver Steve Byron said, "When (Canepa Hanover) made a break that sure helped, but I was just hoping to get a good trip and get away close and hopefully see what happens at the end of the mile and it worked out perfect," said Byron. "He's getting more manageable. He is a big strong horse and he showed he could compete tonight."

Right: Last place finisher and beaten favorite Canepa Hanover finishes the race far behind everyone else after breaking stride on the backstretch. 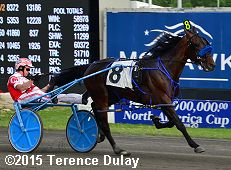 The $75,000 North America Cup Consolation featured 10 colts who did not qualify for the rich final. 4-1 Physicallyinclined, 17-1 Rock N Roll World, and 57-1 The Wayfaring Man battled for the lead through fractions of 26.1, 54, and 1:22 while stalked by 5-2 favorite Split the House parked wide around both turns. Into the stretch Physically Inclined gained the lead for good, drawing off to win by 3 1/2 lengths over Rock N Roll World in 1:49. It was another 1/2 length back to 3-1 second choice Pierce Hanover third, and 1 more to favorite Split the House fourth.