The 37th running of the $1 million Pepsi North America Cup, Canada's richest harness race, was contested on Saturday night at Woodbine Mohawk Park featuring the best 3-year-old pacing males in North America going the standard 1 mile trip around the 7/8 mile stonedust oval in Campbellville, Ontario. Traditionally run in mid June as a prep for the Pacing Triple Crown, due to the global pandemic the race was postponed to the last Saturday in August. However, racing in Ontario continues to be contested without fans in attendance, with only selected media and a limited number of owners allowed to watch from the usually packed apron. Despite this, a record North America Cup night handle of $5.6 million was bet on the 13 race card. A full field of 10 lined up behind the starter under partly cloudy skies (with intermittent light showers) and a post time temperature of 16 C (61 F).

Tall Dark Stranger was sent off as the 3-5 favorite off wins in the Meadowlands Pace, Cane Pace, and his North America Cup elimination heat. In to challenge him included 5-1 second choice Capt Midnight, 2nd in the Cane Pace and his elimination heat, and 11-2 third choice Tattoo Artist, 5th in his elimination after winning three straight Ontario Sires Stakes events,

Driver Bob McClure sent Tattoo Artist to the lead first time by through an opening quarter in 25 4/5 seconds before Tall Dark Stranger took over down the backstretch through a half in 53 3/5 and 3/4 in 1:21, while as many as 2 1/4 lengths ahead of Tattoo Artist giving chase. Turning for home, Tattoo Artist came back to poke his head in front midstretch but Tall Dark Stranger and driver Yannick Gingras pulled away in the final furlong to win by 2 lengths in 1:48 2/5. It was another 3/4 length back to 127-1 longshot Moneyman Hill third 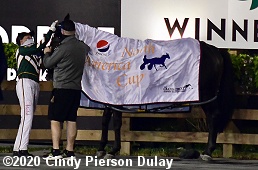 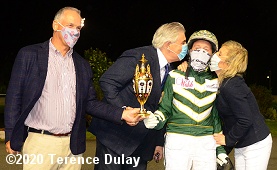 Left: Tall Dark Stranger in the winner's circle. Winning co-owner Marvin Katz said, "I've been doing this for a very long time and I've been fortunate to have many great horses, but I think this guy really rates up with some of the greatest horses we've ever seen. This is historic. What he's done tonight has never been done before. He won the Metro as a two-year-old, he won the Breeders Crown – he's come back to win the Meadowlands Pace and he's won the North America Cup. Somebeachsomewhere, Captaintreacherous, they couldn't do it, but he's done it."

Right: The trophy celebration for the North America Cup. Woodbine CEO Jim Lawson looks on as winning co-owners Marvin and Lynne Katz give driver Yannick Gingras a masked kiss while holding the trophy. 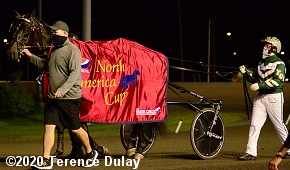 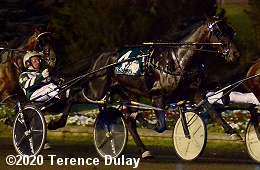 Left: Tall Dark Stranger in the post parade. Winning driver Yannick Gingras celebrating his first NA Cup win said, "I rolled him to three-quarters pretty hard but he just never quits. He's just a tremendous horse – the best pacing colt I've ever driven, there's no doubt in my mind. He's just an amazing animal. I feel awesome, there's no doubt about it. This means so much. I couldn't be any happier right now." 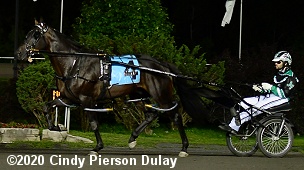 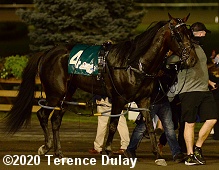 Left: Tall Dark Stranger warms up earlier in the evening. Gingras added, "I think he's just stronger than they are right now, and he can get them tired just by trying to keep up with him."

Right: Tall Dark Stranger heads back to the barn after the race. Winning trainer Nancy Takter, unable to attend due to travel restrictions said by phone, "This is an extra-special colt in extraordinary circumstances, I'm so proud of the horse and my team." 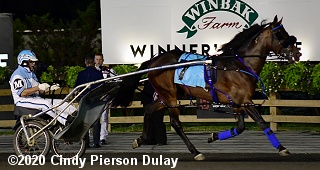 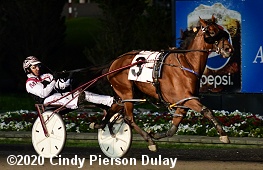 There were eight other stakes races on Saturday night. The $400,000 Fan Hanover Stakes is the distaff counterpart to the North America Cup, with a field of ten 3-year-old pacing fillies. 5-1 Lady Lou was quickest way through an opening quarter of 26 3/5 before driver Doug McNair sent 4-5 favorite Party Girl Hill to lead down the backstretch through a half in 54 4/5 and 3/4 in 1:22 1/5. Kept to task by McNair, Party Girl Hill opened up through the stretch to win by 2 3/4 lengths over Lady Lou in 1:49 2/5. It was a neck back to 3-1 second choice Peaky Sneaky third. 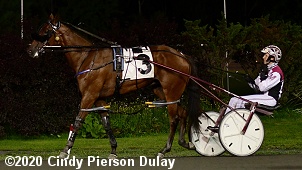 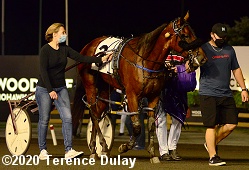 Left: Party Girl Hill heads to the winner's circle. Winning driver Doug McNair said, "I just kind of rolled her along a little more this week ... she just paced right through to the wire. I was real happy with her, she came through for me."

Right: Party Girl Hill heads back to the barn after the race. 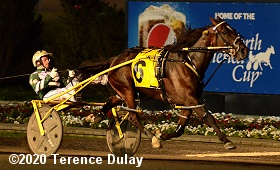 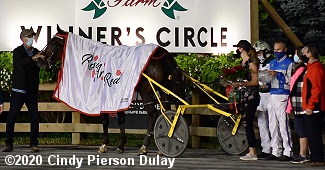 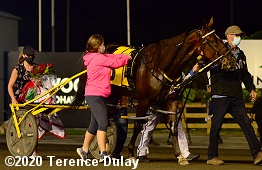 Left: Warrawee Ubeaut in the winner's circle. Winning driver Yannick Gingras said, "I wasn't going to fight her. Once I got her to the front, she was able to relax a little bit. She's used to winning, and there's no doubt in my mind that horses know when they win to when they don't. It's a tough jump from three to four, but she's a big, strong horse, and she's just getting stronger."

Right: Warrawee Ubeaut heads back to the barn after the race. 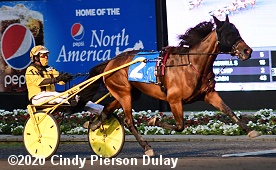 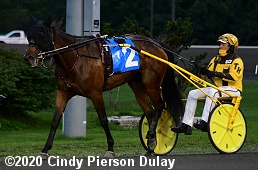 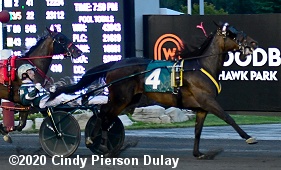 Left: Hey Livvy heads to the winner's circle. Winning driver and co-owner Trevor Henry said, "I had no idea that [Atlanta] had run. That might've changed things, but I didn't know she ran. I got this horse partly given to me because I got along with her, and she was so hard at the start, she still is hard to drive, but she's a fast mare and you appreciate it when she wins." 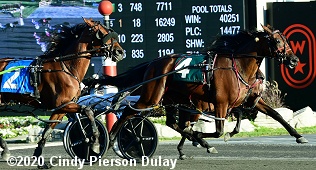 North America Cup night included 2 stakes races for pacing juveniles, run in divisions. The Eternal Camnation for fillies was run in three $75,000 divisions, each with a field of 7. In the first divsion, 3-1 second choice Nightlife Seelster took over the lead from even-money favorite Andra Day and led the rest of the way to win by 1/2 a length over late-running 6-1 Adashious Hanover. It was another 1/2 length back to 5-1 Voelz Delight third, while favorite Andra Day tired badly to finish last, beaten 12 1/4 lengths.

Winning driver Bob McClure said, "I had to use her way more than I wanted in the first half. She got a bit of a breather in the last turn, but it's always handy to have the front when you have that headwind coming, too." 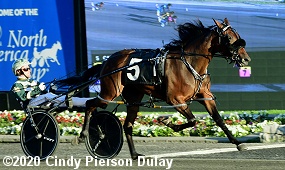 In the second division of the Eternal Camnation, driver Yannick Gingras sent 1-2 favorite Caviart Audrey to the front immediately through fractions of 28 1/5, 56 1/5, and 1:23 2/5, extending her lead every step of the way. Kept to task by Gingras, Caviart Audrey finished 9 1/4 lengths ahead of late-running 108-1 longest shot Twin B Sunkissed in 1:51 2/5. It was another length back to 20-1 Postscript third.

Winning driver Yannick Gingras said, "I loved her all winter long when I baby raced her, I thought she was a tremendous filly last week at Pocono. She just stepped around a shadow in the last turn, so that's why tonight at the half, there were some shadows in the last turn, so I just got her in gear and made sure I had her attention and let her roll through." 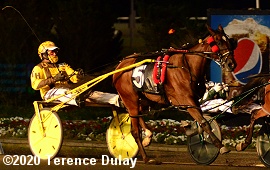 Closing out the Saturday stakes action was the third division of the Eternal Camnation. 7-5 second choice Best Head West led first time by through an opening quarter of 27 3/5 before 6-5 favorite Scarlett Hanover gained the lead down the back through a half in 56 seconds and 3/4 in 1:25 1/5. Scarlett Hanover looked homefree with a 1 3/4 lead midstretch but Best Head West and driver Trevor Henry fought back late to win by a head in 1:53 1/5. It was a long 3 1/2 lengths back to 17-1 Spellcheck Hanover third.

Winning driver Trevor Henry said, "They made a few changes and she's just hit her game now. I had to put her up close like near the lead tonight. She's funny around the first turn, she won't pass [horses]. Once I got to the front, I was glad Yannick came [with Scarlett Hanover] because I was in trouble. She doesn't want to keep going, that's happened in her first start, she ran to the infield on me. She's just green, but she's a nice filly." 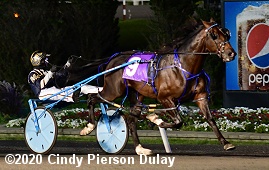 Winning driver Bob McClure said, "He's just improving every week.He was a little bit unmanageable for a couple of starts, then Ian (Moore, trainer) changed some rigging on him and now he's just perfect. He surprised me tonight, I mean he got it cheap to the half and everything but he really stepped up and outraced some really nice colts. It's one thing to win Ontario Sires Stakes races and everything but he beat some nice other colts too. I think he's trending in the right direction." 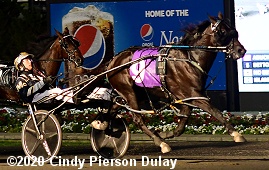 The second Nessagawaya division originally drew 10 but only 8 started after 2 scratches. 5-4 second choice Bettor Sun set the pace of 26 3/5, 55 3/5, and 1:24 1/5 while pressed by 9-1 Perfectboy Hanover and stalked by 4-1 Island Beach Boy. Bettor Sun continued to lead to midstretch but 3-2 favorite Abuckabett Hanover with driver Bob McClure, 4th early, closed late to win by a length over 66-1 No Better Joy in 1:52 1/5. It was another 1 1/2 lengths back to pacesetter Bettor Sun third.

Winning driver Bob McClure said, "I actually went by the farm and trained him during the week, so I got a feel for him. He's still a little green, but extremely fast and willing. He's got the potential to have a really bright future, so that's fun."