The 35th running of the $1 million Pepsi North America Cup, Canada's richest harness race, was contested on Saturday night at Woodbine Mohawk Park featuring the best 3-year-old pacing males in North America going the standard 1 mile trip around the 7/8 mile stonedust oval in Campbellville, Ontario, and is a major prep for the Pacing Triple Crown. A full field of 10 lined up behind the starter under partly cloudy skies and temperatures in the high 70's, with the track rated fast.

Lather Up was sent off as the 3-5 favorite, winner of 5 straight including the Somebeachsomewhere Stakes and his elimination heat for this event. In to challenge him included 4-1 second choice Stay Hungry, runner-up in last year's Governor's Cup at the Meadowlands and third in the Pennsylvania Sires Stakes, and 11-2 third choice Done Well, secomnd in his elimination heat after winning the Pennsylvania All-Stars in May.

Driver Tim Tetrick sent Done Well to the lead first time by through an opening quarter of 26 3/5 before Lather Up took over down the back, setting fractions of 54 1/5 and 1:21 3/5 while about a length in front of Done Well on the inside and 46-1 Nutcracker Sweet on the outside. Entering the stretch, driver Montrell Teague asked Lather Up to pull away and the favorite obliged, opening up a 2 length advantage midstretch. Kept to task by Teague, Lather Up drew off late to win bu 3 1/4 lengths over Done Well in 1:48 1/5. It was another 1/4 length back to late-running 17-1 Lost in Time third. 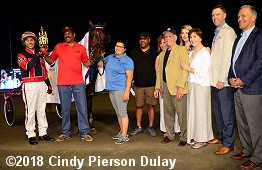 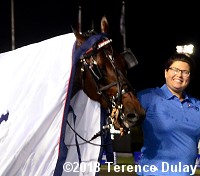 Left: The winner's circle celebration for Lather Up. Winning co-owner and breeder Gary Iles said "I've been breeding horses for a lot of years now. It's a sensational feeling. To come away with a win, it doesn't get any better than this."

Right: Lather Up heads back to the barn after the race. Winning driver Montrell Teague said, "I definitely wanted to retake. Tim (Tetrick with Done Well) could have went on and taken a bigger fraction for the half but I was trying to go back to the front and back the half down as much as I could. It didn't go the way I thought it was going to be. I thought everyone was going to be a lot more aggressive for a million-dollar race and I would come off cover, but there was only about three of them left out there and I was one of them." 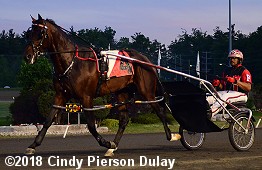 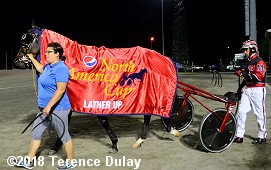 Left: Lather Up warms up earlier in the evening. Winning trainer Clyde Francis said, "When (Teague) moved him back to the front, I thought he had a good shot. He wasn't going to get blocked in. Most times,you worry about getting blocked in, somebody pulls early on you, especially in a race like that, but (Lather Up) was on his game tonight."

Right: Lather Up in the post parade. Teague added, "I've been holding this (losing in 2015 with favorite Wiggleit Jiggleit) over my head for so long,just because it's one of the biggest races that I can be in and you only get so many opportunities. You have to take advantage of them. The first time I didn't. I kind of got riled up in the moment, but this time I learned from that and made it work." 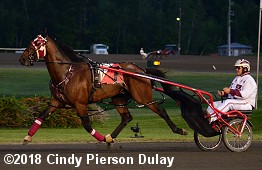 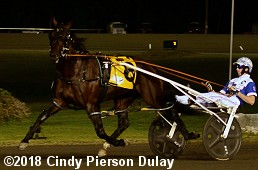 Left: Second place finisher Done Well warms up earlier in the evening. Driver Tim Tetrick said, "I got a great trip.I thought I gave (Lather Up) a run, but Teague's horse wason his game today. That's a nice colt. He paced right away from mine, but luckily enough I could hold on to second. I got in a good spot without using (Done Well) too much and I knew I was following a good horse. Montrell kept it rolling and I just couldn' t keep up with him, but my horse was second best."

Right: Third place finisher Lost in Time warms up after the post parade. 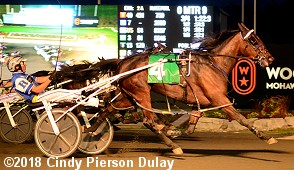 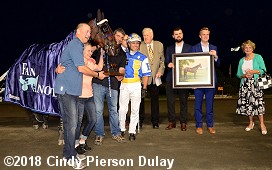 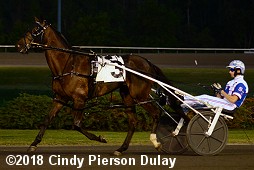 Left: Shower Play in the winner's circle. Winning driver Louis Philippe Roy said, "Every time I drove her, even when I qualified her, she surprised me more and more. I knew she was ready for more. Last week after the race, I was in the drivers' room and I told James (MacDonald), next week, if I get a good draw I think I'm a winner in there. With the four-hole I was happy and the trip worked out good. Going down the backstretch, I tried to flush Scott (Zeron, Kissin In The Sand) early a little bit because I wanted him to be first up and I knew Kissin In the Sand was probably the one to beat. I told myself if I could be second over behind her, that would be perfect for me. But, just a little bit later Chris (Christoforou, Just Her Luck) went first up. And, actually, Kissin In The Sand got the perfect trip and I had to beat her, but the filly showed she was so good and did the job."

Right: Second place finisher and beaten favorite Kissin In The Sand in the post parade. 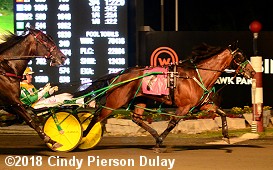 Immediately before the North America Cup, the $370,000 Roses Are Red Stakes featured a field of 10 older pacing mares. 9-2 second choice Blazin Britches was quickest away through an opening quarter of 25 4/5 before driver Tim Tetrick sent 3-4 favorite Shartin N to lead down the back through fractions of 54 2/5 and 1:22. Turning for home, Shartin N opening up a 1 1/2 length advantage, and held off late-running 11-2 fourth choice Blue Moon Stride by 3/4 length in 1:49 3/5. It was another 1/4 length back to 39-1 L A Delight third. 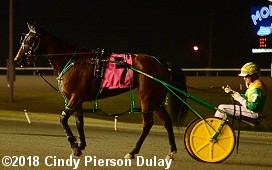 Left: Shartin N in the winner's circle. Winning driver Tim Tetrick said, "I let her tell me what she wanted to do off the gate, which I've always done and today I did let her step forward pretty good and get early position and it worked out. I was going to make my way to the front and I went ahead and did that. She didn't want to listen to my audible (last week), but she's a good mare. She's got her quirks but with as much speed as she has, she can overcome a lot of that." 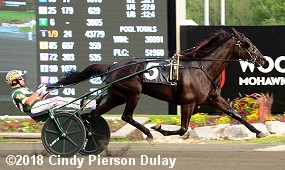 Kicking off the stakes action on Saturday, a full field of 10 faced the starter in the $250,000 Armbro Flight Stakes for trotting older fillies and mares. As expected, driver Yannick Gingras sent 1-10 favorite, two time winner and 2017 U.S. Horse of the Year Hannelore Hanover to the front through fractions of 27, 56 1/5, and 1:24 3/5 while stalked by 7-1 Emoticon Hanover and 143-1 Majestic Presence. Turning for home, the champion left the field in her wake, drawing off late to win by 3 3/4 lengths over Emoticon Hanover in 1:52. It was another 1/2 length back to 47-1 Caprice Hill third. 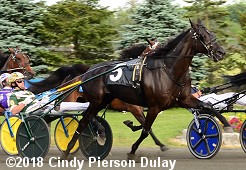 Left: Hannelore Hanover in the winner's circle. Winning driver Yannick Gingras said, "Right now she couldn't be any better. She's sound, she's happy, I didn't even kick the plugs the last couple of weeks, she's doing it on her own."

Right: Hannelore Hanover shortly afer the start. Co-owner Frank Baldachino said, "They might have to rename (the Armbro Flight) as the Hannelore Hanover! What can you say, she's owned this race the last 3 years and she's just unreal. She has such a following now, even in Europe. All the Europeans that text and tweet me trying to get me to bring her over. It's great for the business and great for horse racing." Baldachino said Hannelore Hanover's retirement plans on are "on hold", with a possible trip to France in the cards for the fall. 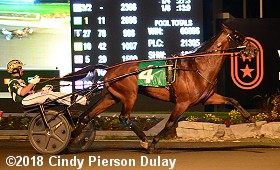 The $266,000 Goodtimes Stakes featuring a field of nine 3-year-old trotters. 27-1 Lawmaker was quickest away through an opening quarter of 27 3/5 before driver Yannick Gingras put 6-5 favorite Wolfgang on the front through fractions of 56 2/5 and 1:24 3/5. Turning for home, Wolfgang was long gone, opening up by 3 midstretch and finishing up 4 lengths ahead of 136-1 longest shot Stormont Ventnor in 1:52 1/5. It was another 2 1/2 lengths back to 3-2 second choice Alarm Detector third. 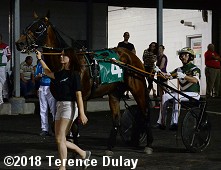 Left: Wolfgang in the winner's circle. Winning trainer Jimmy Takter said, "I would say so (the race went according to plan). The horse is a very good horse and you can do anything you want with this horse, he's very handy."

Right: Wolfgang heads out for the post parade. Driver Yannick Gingras said, "He feels smooth when you're sitting behind him, but if you look at him he's not as smooth as other trotters. But he gets the job done and he's willing to please, anytime you ask him, he'll give you some more and that counts for a lot." 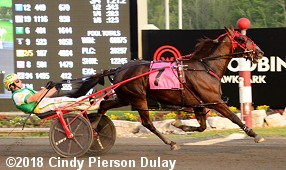 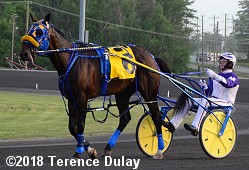 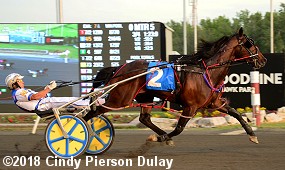 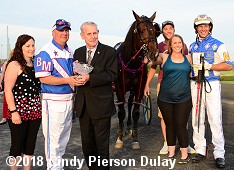 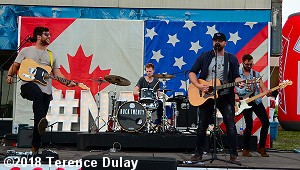 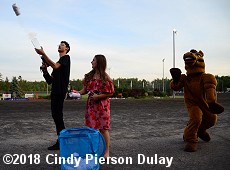 Left: The band Buck Twenty was playing for the fans all evening.

Right: They were firing t-shirts into the crowd several times between races. Only one wound up on the roof though. 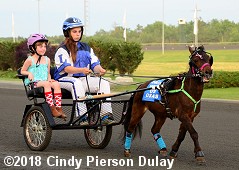 Left: Central Ontario Standardbred Association had the "Drive With Us" program all night between races with both a full size horse and this little cute little guy.

Right: A different look at one of the earlier races from the inside.