The 34th running of the $1 million Pepsi North America Cup, Canada's richest harness race, was contested on Saturday night at Mohawk Racetrack featuring the best 3-year-old pacing males in North America going the standard 1 mile trip around the 7/8 mile stonedust oval in Campbellville, Ontario, and is a major prep for the Pacing Triple Crown. A full field of 10 lined up behind the starter under cloudy skies and temperatures in the mid 70's after a brief thunderstorm passed through the area earlier in the afternoon. 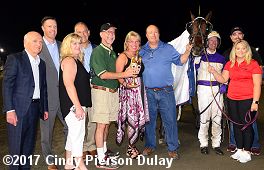 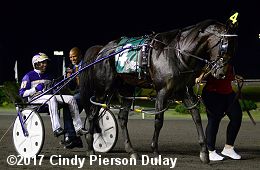 Left: The winner's circle celebration for Fear the Dragon, with the trophy presented by Toronto Maple Leafs general manager Lou Lamoriello (far left). Winning trainer Brian Brown, celebrating his first North America Cup win said, "It's unexplainable; you would have to ask the guys that win these races regularly. This is my first time, I don't know what to say, it's incredible that we're even here with two horses and to come away with a win is just something that is unexplainable."

Right: Fear the Dragon parades after the race. 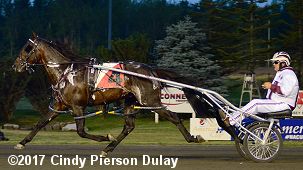 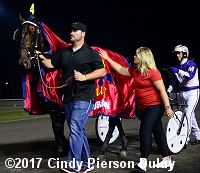 Left: Fear the Dragon was quite sweaty and he warmed up earlier in the evening. Driver Dave Miller, winning consecutive North America Cups said, "My horse was having a hard time keeping up (with the hot pace). He was gapping and I was chasing him and he didn't really get into contention until right at the head of the stretch and then he dug, he fought Huntsville, he kept fighting and it was a battle right to the wire." 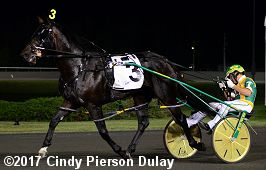 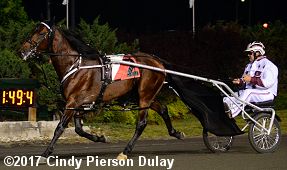 Left: Second place finisher and beaten favorite Huntsville warms up after the post parade. Trainer Ray Schnittker said, "Great race. I thought he raced good. Maybe we would have gotten there with reverse trips if my horse was on the outside, because he runs out a little bit. Who knows?" He will go next in the Meadowlands Pace.

Right: Third place finisher Downbytheseaside warms up earlier in the evening. Trainer Brian Brown said, "I'm very proud of Downbytheseaside, Brian (Sears), (caretaker) Toni (Dale Hollar). They went a big mile today. It was incredible fractions and for that horse to still finish third and hang in there, I was proud of him." 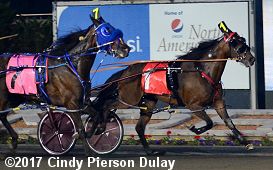 There were five other stakes races on Saturday night. The $440,000 Fan Hanover Stakes is the distaff counterpart to the North America Cup, with a field of ten 3-year-old pacing fillies. 16-1 Agent Q was quickest away through an opening quarter in 26 4/5 before driver Doug McNair sent 11-1 Bettors Up to the lead on the backstretch through fractions of 55 1/5 and 1:22 1/5. Bettors Up had a 1 length lead at the 1/8 pole, and was able to outfinish Agent Q by a nose at the line in 1:49 4/5. It was another 1 1/4 lengths back to late-running 7-10 favorite Tequila Monday third. 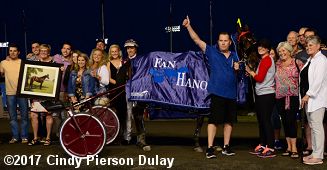 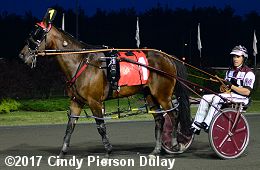 Left: Bettors Up in the winner's circle. Winning driver Doug McNair said, "I thought (she held on), I got my hopes up a little bit after and I kind of had to relax a bit. She is not a very big filly so I wasn't quite sure. There wasn't a lot of leavers. I actually tried to get away in the two-hole behind Dave (Miller and Agent Q). It didn't work out. But it actually worked out the right away for us. I had to revoke her back to the lead and she did the rest."

Right: Bettors Up returns after the race. Winning trainer Scott McEneny added, "She had a good week. She drew well and she raced really tough last week so I was very happy with her race last week. Things worked out tonight." 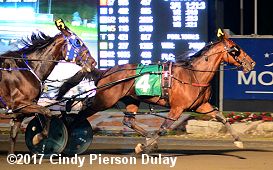 Immediately before the North America Cup, the $365,000 Roses Are Red Stakes featured a field of 10 older pacing mares. 9-1 Call Me Queen Be was quickest away through an opening quarter of 25 3/5 before 5-2 second choice Nike Franco N took over down the back through a half in 54. 4-5 favorite and two-time winner Lady Shadow, parked out very wide around both turns with driver Yannick Gingras while 3rd, moved up to take the lead at the top of the lane through 3/4 in 1:21 3/5. 18-1 Wrangler Magic attempted to close late but Lady Shadow held her off by 3/4 length to complete the "three-peat" in 1:48 4/5. It was another 1/2 length back to Call Me Queen Be third. 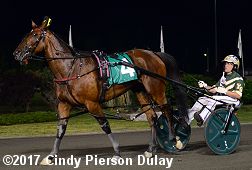 Left: Lady Shadow in the winner's circle. Winning driver Yannick Gingras said, "I had to move her over a little bit (while Wrangler Magic struggled for room) and I just hoped to get back to the two-path. It was clear sailing after that. I thought I had everyone pretty much where I wanted them [in the final turn]. I assumed, the way I saw [the issues in] the backstretch that Louis Phillippe (Roy on Wrangler Magic) would be disqualified. I knew I had the field stacked up behind me, and I knew I could've gone by Timmy (Tetrick on Nike Franco N) earlier and let her do her thing in the stretch. She's so tough. She has big lungs and is real tough. No doubt I would've rather been on the lead tonight, but there was plenty of action and a lot of horses would've tried to take their shot at her; she was the horse to beat. I think tonight she proved that she's the best."

Right: Lady Shadow parades after the race. The six-year-old daughter of Shadow Play out of Lady Camella has won 32 of 59 career races earning $2,108,662. She is owned by David Kryway, Carl Atley, Ed Gold, and BFJ Stable, and trained by Ron Adams. 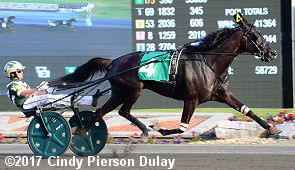 Kicking off the stakes action on Saturday, a full field of 10 faced the starter in the $253,000 Armbro Flight Stakes for trotting older fillies and mares. 28-1 Emoticon Hanover was quickest away through an opening quarter of 27 seconds before driver Yannick Gingras sent 1-5 favorite and last year's winner Hannelore Hanover to the front on the backstretch through fractions of 56 1/5 and 1:24 1/5. Entering the lane, Hannelore Hanover left the field in her wake, opening up by 2 1/2 at the 1/8 pole and finishing up 3 1/4 lengths ahead of 6-1 Charmed Life in 1:51 4/5. It was another head back to Emoticon Hanover third. 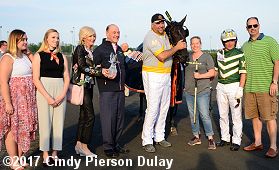 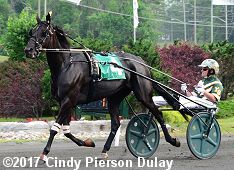 Left: Hannelore Hanover in the winner's circle. Driver Yannick Gingras said, "There was a lot of movement behind the gate and a lot of close quarters there for a little bit so I just wanted to make my way to the front as easy as I could and keep her out of trouble."

Right: Hannelore Hanover in the post parade. The last back-to-back winner of the Armbro Flight was the great Peaceful Way in 2005-2006. 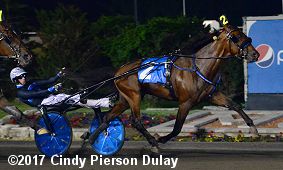 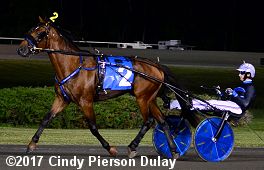 Left: International Moni in the winner's circle. Winning driver Scott Zeron said, "I didn't mind where I got away, my horse is really handy. I was very happy with where I was sitting and when I angled him over I felt like I was an easy winner and I didn't even pull the plugs, but good thing I can hear my Dad (Rick Zeron driving Mass Production) screaming behind me, so I pulled them and he went on again."

Right: International Moni in the post parade. The son of Love You out of the great Moni Maker is 2 for 2 this year with career earnings of over $330,000 for owner-breeder Moni Maker Stable and trainer Frank Antonacci. 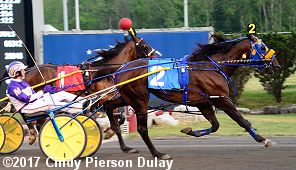 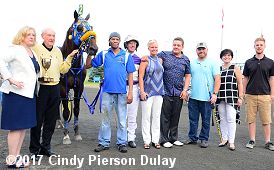 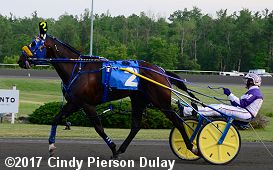 Left: McWicked in the winner's circle. The six-year-old horse by McArdle from the Western Ideal mare Western Sahara, scored his 20th win in 59 tries, pushing his career earnings to $1,928,866. 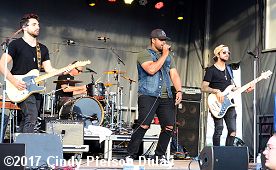 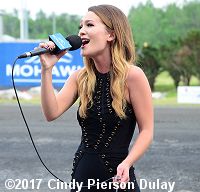 Left: Canadian country music artist JoJo Mason provided entertainment for the crowd at Mohawk. There were also a variety of contests and games for the fans.

Right: Canadian country music artist Kira Isabella sang the national anthems of both the US and Canada before the North America Cup card 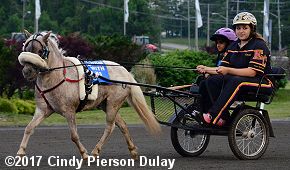 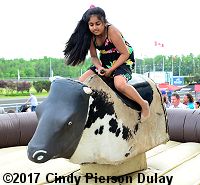 Left: Central Ontario Standardbred Association had the "Drive With Us" program all night between races with both a full size horse and this little cute little guy.

Right: They had free mechanical bull rides for the kids. Although they took it easy on them, few lasted more than 20 seconds. You can watch one here.