The 36th running of the $1 million Pepsi North America Cup, Canada's richest harness race, was contested on Saturday night at Woodbine Mohawk Park featuring the best 3-year-old pacing males in North America going the standard 1 mile trip around the 7/8 mile stonedust oval in Campbellville, Ontario, and is a major prep for the Pacing Triple Crown. A full field of 10 lined up behind the starter under light showers and a post time temperature of 17 C (63 F). Despite the intermittent showers through the card, the track remained fast.

Workin Ona Mystery was sent off as the 7-5 favorite off wins in Pennsylvania Sires Stakes company at the Meadows and Pocono Downs before his Cup elimination. In to challenge him included 3-1 second choice De Los Cielos Deo, 2nd behind Workin Ona Mystery in the eliminatiion, after finishing 6th in the Pennsylvania Sires Stakes at Philadelphia, and 7-2 third choice Bettors Wish, winner of the other elimination heat after winning the Art Rooney Stakes at Yonkers. 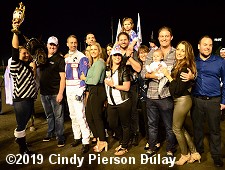 The winner's circle celebration for Captain Crunch. Winning trainer Nancy Johansson said, "It was just one of those things that happens last week in the elimination. I knew that the horse raced really well just to make it to the final so I really wasn't worried. I don't want to sound cocky or anything but I knew he was the best horse going into it and it was just up to him to show everybody. The last eighth of a mile I must screamed his name like 30 times. My hands actually hurt but it was exciting to watch the race. Obviously he didn't get anything for free. He's just an amazing animal." 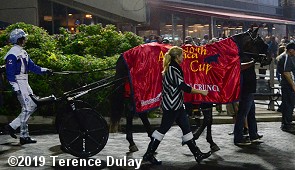 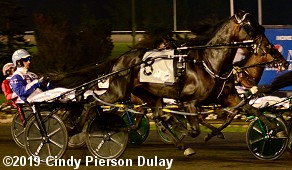 Left: Captain Crunch heads out for the post parade with trainer Nancy Johansson beside him. Johansson is the daughter of trainer Jimmy Takter and captured her first North America Cup with her first 'Cup' final starter. The North America Cup is one of only a few marquee races that Takter did not capture in his Hall of Fame career. 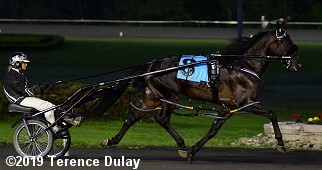 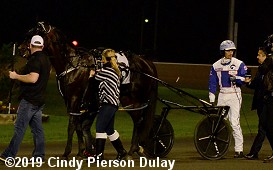 Left: Captain Crunch warms up earlier in the evening. Winning driver Scott Zeron, celebrating his first North America Cup win, said, "It feels unbelievable. This has been the end-all, be-all for me. It's completed my entire bucket list. We've got a lot of racing left to do, but I can't say enough about how amazing this animal is. I didn't want to be in that spot I was in in that race but at the same time he overcame it with just his greatness.”

Right: Captain Crunch returns after the race. Winning owner Buck Chaffee said, "He raced on the outside the whole way. He raced tough and so we thought he was pretty good tonight.We thought he was in real good shape and he proved us right." 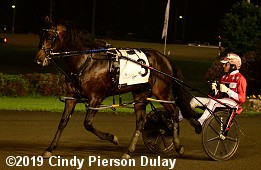 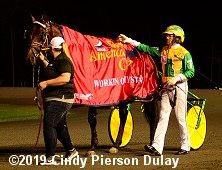 Right: Third place finisher and beaten favorite Workin Ona Mystery in the post parade. Trainer Brian Brown said, "It was not exactly the way I thought (it would go). I didn' t expect to be on the front.Timmy (Tetrick) makes the decisions when the gate closes and I'm sure didn't expect to be there in 52 4/5, but it's just the way things work out. He has the green light and he makes all the decisions. I'm very proud of my horse, he was parked to the half in :52.4 and still got beat 1 1/4 lengths." 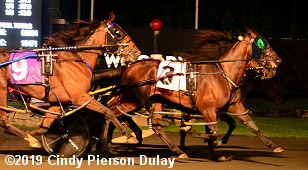 There were five other stakes races on Saturday night. Run immediately before the feature, the $454,000 Fan Hanover Stakes is the distaff counterpart to the North America Cup, with a field of ten 3-year-old pacing fillies. 55-1 Powerful Chris was qickest away through an opening quarter of 27 seconds before 1-2 favorite Warranee Ubeaut took over through a half in 54 1/5 and 3/in 1:21 1/5 while pressed by 5-2 second choice Treacherous Reign and stalked by Powerful Chris. Warrawee Ubeaut continued to lead by 1 1/2 lengths in midstretch through 7/8 in 1:34 4/5 but Treacherous Reign and driver Dexter Dunn rallied late to win by a nose in 1:48 3/5. It was a neck back to Powerful Chris third. 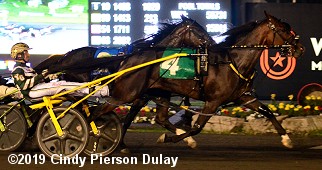 Left: Treacherous Reign in the winner's circle. Winning driver Dexter Dunn said, “I had to come into the race with confidence. She hasn’t done anything wrong on the campaign she’s had so far, so I sort of knew the way she was doing her runs before tonight she still had something left Trainer Tony Alagna added, “Last year when we started out at Pennsylvania she actually beat Warrawee Ubeaut at The Meadows. It wasn’t out of her realm that I thought she could talent wise. We over raced her; she was tired (and) we put her away. The good thing about her is you can forgive and forget. She’s come back great this year and has just been rock solid.” 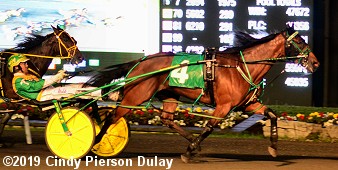 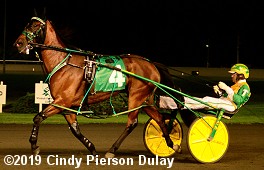 Left: Shartin N in the winner's circle. Winning driver Tim Tetrick said, "Yeah, she's tough. I had a spot where I wanted to go ahead and try to get control, you know, she does the rest. She's pretty easy to drive now, she'll let me relax on the lead and she just keeps going. When somebody comes on her, she really likes to fight. She's a great horse. She's sound, she's healthy and she loves to do her work. Me and Jimmy talk about how tough as nails she is and we haven't messed it up yet between me and him. She's a lot of fun." 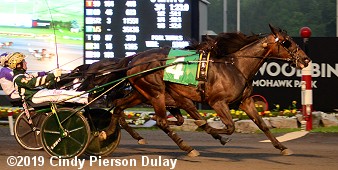 A field of 9 (after 2 scratches) faced the starter in the $256,000 Armbro Flight Stakes for trotting older fillies and mares. 14-1 Emoticon Hanover was quickest away through an opening quarter of 26 3/5 before 5-2 second choice Hannelore Hanover took over down the back through a half in 54 1/5. On the far turn, driver Yannick Gingras sent 1-4 favorite Atlanta, 5th early and parked wide around both turns, to sweep to the front through 3/4 in 1:23. Atlanta opened up a 3 1/2 length advantage on the late running 69-1 Weslynn Dancer through 7/8 in 1:36 3/5, and held her off to win by 1/2 a length in a new track and Canadian record of 1:50 2/5, just 1/5 second off the world record for 4-year-old trotting mares. It was another 3 lengths back to 31-1 Top Expectations third. 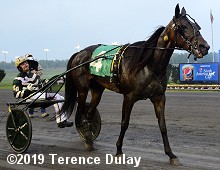 Left: Atlanta in the winner's circle. Winning driver Yannick Gingras said, "It was unreal. Of course, I came up on a horse that got stretched out pretty good so I felt really confident but in the last turn I had a handful of trot. She can trot the turn faster than she can trot the straightaway. I just turned her loose...the acceleration she had was unreal. She went from zero to sixty in three strides. She's an amazing mare."

Right: Atlanta returns after the race. Co-owner Brad Grant added, "When she's racing against the older mares, she's just unbelievable. She's a freak and she showed it again tonight." 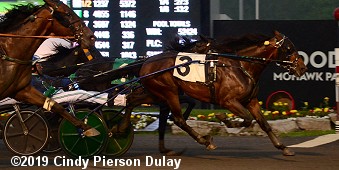 Kicking off the Grand Circuit stakes action, the $247,000 Goodtimes Stakes featuring a full field of ten 3-year-old trotters. 9-2 second choice Swandre the Giant set the pace of 27 3/5, 56 2/5, and 1:24 3/5 while pressed by 8-1 Forbidden Trade and stalked by 13-1 Southwind Avenger. Swandre the Giant continued to lead to midstretch but 1-2 favoriite Pilot Discretion and driver Andy McCarthy, 5th early and wide around both turns, rallied late to win by 1/2 a length over Forbidden Trade in 1:52 4/5. It was a neck back to 7-1 Super Schissel third. 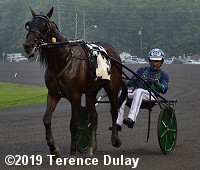 Left: Pilot Discretion in the winner's circle. Winning co-owner Robert LeBlanc said, "It feels fantastic. Originally I'm from Canada so being able to come here with a horse like 'Pilot' and win this race means something special. I've watched the Goodtimes for years and years, and even being a part of it was great. Andrew and Tony and Irene & Robert, the grooms, have just done a fantastic job, and I'm along for the ride, and this is a lot of fun!"

Right: Pilot Discretion returns after the race. Winning driver Andy McCarthy said, "I was having a little trouble seeing up the back. I was looking up to see whether Sylvain (Filion on Knight Angel) made it or not and I ended up third over but it worked out. This horse loves a target, you just have to remind him after he clears." 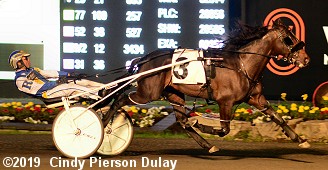 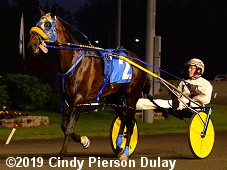 Left: Jimmy Freight in the winner's circle. Winning driver Louis-Philippe Roy said, "My strategy was going to go a little bit with what McWicked was doing so having him right behind me, I wanted him to come first-up on me. I know that he is good that way too but that was I imagined how the trip was to go to beat him. Even if I thought that McWicked was going to be really hard to beat, I thought that was the best way to beat him." 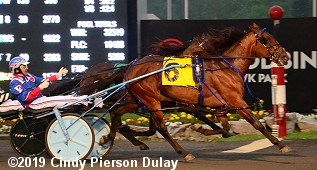 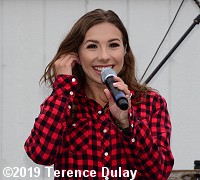 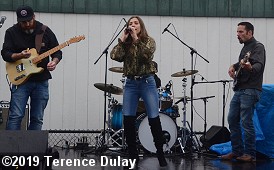 Country music singer Genevieve Fisher took to the stage early in the card.