The 37th running of the $1 million Pepsi North America Cup, Canada's richest harness race, was contested on Saturday night at Woodbine Mohawk Park featuring the best 3-year-old pacing males in North America going the standard 1 mile trip around the 7/8 mile stonedust oval in Campbellville, Ontario. Traditionally run in mid June as a prep for the Pacing Triple Crown, again due to coronavirus restrictions the race was delayed, this time to mid-September in order to allow a limited number of fans to attend. A full field of 10 lined up behind the starter under ideal racing weather, clear skies and a post time temperature of 21.6 C (70.9 F).

Driver Jody Jamieson sent Bulldog Hanover to the lead first time by through fractions of 24 3/5, 55 1/5, and 1:22 while pressed by 19-1 Rockyroad Hanover and stalked by 8-1 fourth choice Whichwaytothebeach. Entering the stretch, Bulldog Hanover continued to lead but was tiring. Desperate Man, 5th early and wide around both turns with driver Trevor Henry, rallied by win by 3/4 length over Perfect Sting in 1:49 3/5. It was another 1/2 length back to Whichwaytothebeach third, and another 1/4 length to favorite and pacesetter Bulldog Hanover fourth. 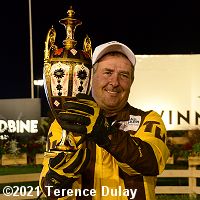 Left: Desperate Man in the winner's circle. Winning co-owner John Cecchin said, "He's a special horse, but you know, we've had a lot of nice horses over the years, but nothing that makes money like this one. The game plan is he's a Saturday-night horse for two or three years, and then after that we'll buy him a saddle and ride him."

Right: Winning driver Trevor Henry celebrates with the trophy. Henry said, "They decided to keep him at home and there was no racing through the pandemic, and that kind of hurt him at the start. He never had the races in him. As the year progressed, he got better and here he is today. It feels great [to win]. These people deserve it. They've been in the business a long time, had some hard times and got lucky to get this horse. I started at the bottom, and now I've won the biggest one. It's been great. I don't get too crazy, but I will have a few beers later." 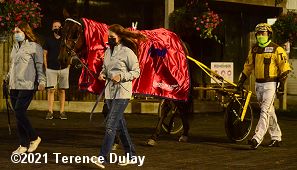 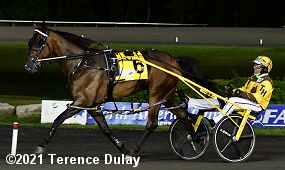 Left: Desperate Man heads out for the post parade.

Right: Desperate Man warms up before the race. Winning driver Trevor Henry said, "I had to have him forwardly placed. He's a little tricky behind the car. Last week, he kind of ran behind the gate. I got him back pacing and I didn't want to rush him off his feet, I was just interested on making the final. Tonight I said 'We got to have him closer. If he makes a mistake, he makes a mistake. But we have to be closer.'" 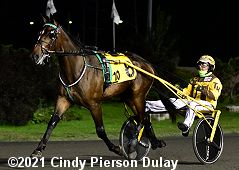 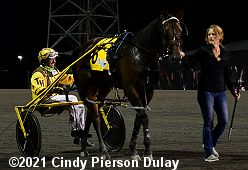 Left: Desperate Man warms up earlier in the evening.

Right: Desperate Man returns after the race, led by trainer and co-owner Kathy Cecchin. This is Cecchin's first North America Cup win with her first starter in the race. Cecchin said, "It's always nice to win, but to be honest with you last week was the pressure week. For me, $8,000 [starting fee] is a lot of money. And when I got it back, everything's gravy. And then maybe the kids will use their share pretty good." 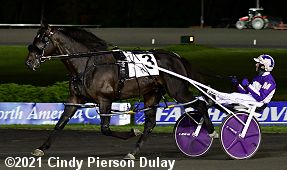 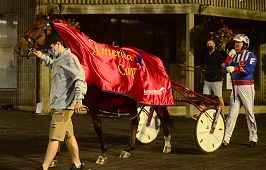 Right: Third place finisher Whichwaytothebeach heads out for the post parade. The Brett Pelling trainee improved his record to 11 wins, 5 seconds, and 3 thirds in 20 starts, earning $356,083 for owners Alan Johnston and John Craig. 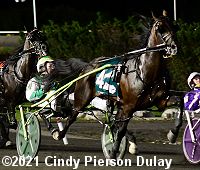 Fourth place finisher and beaten favorite Bulldog Hanover shortly after the start. The John Darling trainee has a record of 10 wins, 1 second, and 1 third in 15 starts, earning $649,811 for owners Jack Darling Stables Ltd. and Bradley Grant. 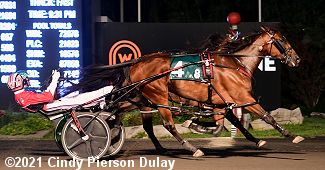 There were six other stakes races on Saturday night. The $425,000 Fan Hanover Stakes is the distaff counterpart to the North America Cup, with a field of ten 3-year-old pacing fillies. 17-1 Notorious Pink was quickest away through an opening quarter of 27 seconds before 1-2 favorite Hot Mess Express took over on the backstretch through a half in 54 4/5 and 3/4 in 1:22 2/5. Hot Mess Express led to the 1/8 pole but 7-4 second choice Fire Start Hanover, 6th early and parked wide with driver Dexter Dunn, rallied to get up by a neck in 1:50 1/5. It was another 2 1/4 lengths back to 38-1 Voelz Delight third. 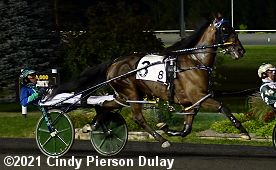 Left: Fire Start Hanover heads to the winner's circle. Winning driver Dexter Dunn said, "She went a big mile. She raced so good off the pace last week and you know there was hot speed early, so we got out of that. We ended up being a way back, she had to come a long way and chase down a really good filly. It was a great effort by her. Nifty and Scotty [Petherick], who's here looking after her, had her ready." Winning trainer Richard "Nifty" Norman added, "I was very excited about this filly, I love this filly, but the race early there, I was glad Dexter bailed on the leave because I know she likes having a target and loves to chase a horse down. I knew she'd be coming home good but Hot Mess Express is a tough horse and I wasn't sure if I was going to get by but she raced fantastic to get the job done." 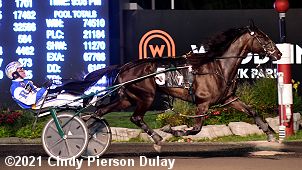 The $240,000 Goodtimes Stakes featured a full field of ten 3-year-old trotters. 35-1 Publicity Seeker was quickest away through an opening quarter of 27 2/5 before 5-2 second choice Fashion Frenzie took over through a half in 56 3/5 and 3/4 in 1:24 3/5. Kept to task by driver Louis-Philippe Roy, Fashion Frenzie dree off to win by 4 lengths over late-rnning 98-1 Ritson in 1:53 2/5. It was another 3/4 length back to Publicity Seeker third, while 9-10 favorite Dancinginthedark M broke stride on the far turn and finished last beaten 29 1/2 lengths. 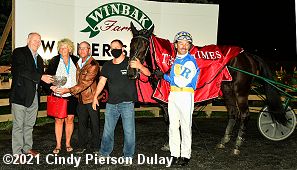 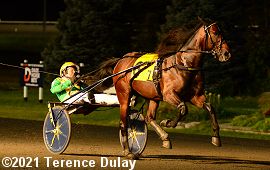 Left: Fashion Frenzie in the winner's circle. Winning driver Louis-Philippe Roy said, "That's what actually happened in the last turn. When I saw (Dancinginthedark M) coming first up I said 'Well, if he comes to me easy and we turn it into a battle in the stretch', I'm pretty confident in my horse, but that horse looked pretty good too last time. When I saw him coming, that was game on right there. We hit three-quarters in 1:24 and Timmy (Tetrick driving Dancinginthedark M) made a break. From out there, I was pretty confident that my horse was going to get us home." 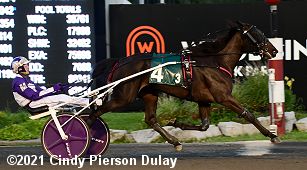 Kicking off the Saturday stakes septet, a field of 8 two-year-old trotting fillies faced the starter in the $392,000 Peaceful Way Stakes. 13-1 American Beauty was quickest away through an opening quarter of 28 1/5 before 1-5 favorite Venerable took over through a half in 57 3/5 and 3/4 in 1:26. Kept to task by driver Dave Miller, Venerable opened up a 4 length lead midstretch and easily held off late-running 9-2 second choice Adare Castle to win by 2 lengths in 1:54 3/5. It was a long 5 1/2 lengths back to 30-1 Peyton Hanover third. 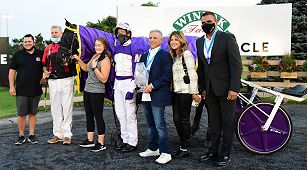 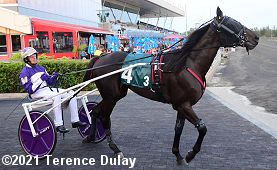 Left: Venerable heads to the winner's circle. Winning driver Dave Miller said, "I got her away from the gate and when I moved her, she got to the lead and relaxed. I spoke to her halfway around the last turn and as soon as I did she just picked it right up, and then into the stretch I just kept talking to her kept her attention and she was pretty comfortable."

Right: Venerable heads out to the track for the post parade. 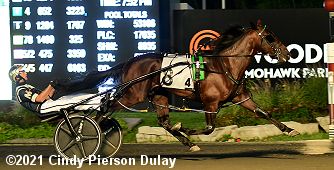 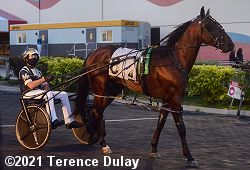 Left: Stonebridge Helios heads to the winner's circle. Winning driver Bob McClure said, "He did it real easy, so he ended up getting away and he was going to be in a position to either move to the front or be first up. But he felt so good, I just decided to just give him his head and let him go cut it. He got to the front and really relaxed. About halfway through the last turn I just spoke to him and he swelled right up and did he ever kick home. I shut him down pretty early, just kept his attention. He's progressing into an extremely nice colt."

Right: Stonebridge Helios heads out for the post parade. 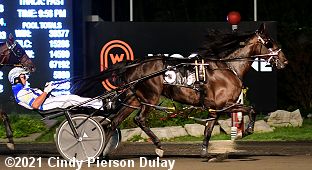 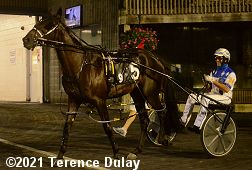 Left: Silver Label heads to the winner's circle. Winning driver James MacDonald said, "I didn't want to get in a big rush with her and blast her to the front. She really loves coming off a helmet. I was hoping I could find one. I probably could've brushed her to the lead, but I just had so much confidence in her. I said 'If I got to come first up, I got to come first up.' When she sees a horse, she just really wants to track them down. I was really confident – it looked like [Boudoir Hanover] was going to get away, and then she just finds more every time you need her to. Just a beautiful horse and a pleasure to drive."

Right: Silver Label leaves the paddock for the post parade. 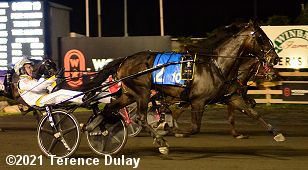 Immediately before the North America Cup, a field of 10 faced the starter in the $640,000 William Wellwood Memorial for 2-year-old trotters, with the winner earning an automatic entry into the Mohawk Million on September 25. 9-1 Letsdoit S led first time by through a quarter in 28 3/5 before 12-1 Temporal Hanover took over through a half in 57 2/5 and 3/4 in 1:25 3/5. 17-2 Duly Resolved, 5th early, gained a short lead midstretch but 4-5 favorite King of the North, 6th early and parked wide by driver Mark MacDonald, rallied to win by a length in 1:54 2/5. It was another 2 1/4 lengths back to Letsdoit S third. 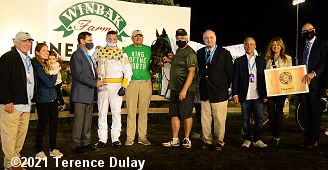 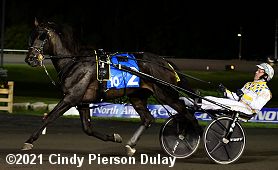 Left: King of the North in the winner's circle. Winning driver Mark MacDonald said, "Last week he raced well and like I said, we tweaked him a little bit and changed his shoes tonight and I thought he trotted a little cleaner. He was just kind of on that line again, so we just have to tweak him a little bit more and try and get him really good for the Mohawk Million, we're pretty excited to be into that."

Right: King of the North warms up before the race.