The Longines Hong Kong International Races are the richest horse races run in Hong Kong, and is the last major race day for Thoroughbred flat racing anywhere in the world. Billed as the "Turf World Championships", four Group 1 races were contested on Sunday afternoon over the right-handed 1 3/16 mile turf oval at Sha Tin Racecourse. Conditions were ideal for racing, with sunny skies, a daytime high of 26 C (79 F), and the turf course rated good.

Hong Kong Jockey Club's CEO Winfried Engelbrecht-Bresges said, "Hong Kong has a horse population of 1,350 horses and we hold our own against the best in the world, we compete successfully against countries with a horse population of 8,000 or 14,000," Mr Engelbrecht-Bresges said. "It is something Hong Kong can be very proud of. "Today is a day which had tremendous sporting success and this is something everybody in the Club should be proud of. There are people you do not see who make a big commitment to the Club and to this event. I am extremely grateful for their contributions and I commend them for their dedication. I also thank the Government for trusting us to stage the Longines HKIR in such trying circumstances. The closed-loop racing bubble has worked extremely well." The racecard set a record handle of HK$1.728 billion (US$221.5 million) despite attendance limited to 17,423, well short of the over 50,000 that usually pack the stands and apron.

In the main event, a field of 8 older horses contested the HK$30 million (US$3.8 million) Longines Hong Kong Cup (G1) at 2000 meters (about 1 1/4 miles) on the turf. Breeders' Cup Filly and Mare Turf (G1) winner Loves Only You was sent off as the 8-5 favorite in the field of 12, winner of the Queen Elizabeth II Cup (G1) over the same Sha Tin trip in April before finishing a close second in the Sapporo Kinen (G2). In to challenge her included 4-1 second choice Dubai Honour, second in the QIPCO Champion Stakes (G1) at Ascot after winning the Prix Dollar (G2) at Longchamp, and 9-2 third choice Hishi Iguazu, 5th in the Tenno Sho Autumn (G1) at Tokyo after winning the Nakayama Kinen (G2).

Jockey Matthew Chadwick sent 21-1 Ka Ying Star to the lead first time by through an opening quarter of 26.12 before 28-1 Bolshoi Ballet briefly led through a half in 50.62. Ka Ying Star regained the lead down the back and around the far turn through 3/4 in 1:14.35 and a mile in 1:37.59 pressed by Bolshoi Ballet and stalked by 43-1 Mac Swiney and 22-1 Glorious Dragon. In the stretch Ka Ying Star tired as favorite Loves Only You, 5th early under Yuga Kawada and in traffic, came through between horses at the 1/8 pole and outfinished deep closer Hishi Iguazu to win by a head in 2:00.66. It was another length back to 23-1 Russian Emperor third. 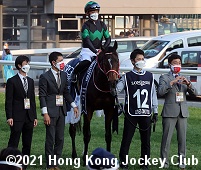 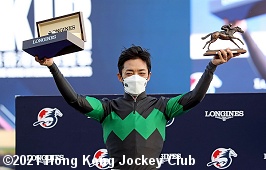 Left: Loves Only You in the winner's circle after the Hong Kong Cup. Yusako Oka, assistant to winning trainer Yoshito Yahagi said, "I'm so glad to win this race for our trainer, who is watching on in Japan. She won the Breeders' Cup very well and in the spring she came over here and had a good result, so we were always confident she would run well. She's got a good pedigree – so we are looking forward to the next stage of her career – and as we have quite a lot of good horses in the stable we hope we will be back in Hong Kong with them in the future."

Right: Winning jockey Yuga Kawada celebrates with the trophies after the race. Kawada said, "Thank you very much, I'm really proud. She jumped well but the pace was a bit slow. She relaxed well and then I was able to get a good position. She's given me two big presents. She's the best female horse I've ever ridden. I hope she will be a good mother." 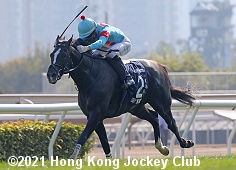 Kicking off the Longines Hong Kong International Races for 2021 was the HK$20 million (US$2.6 million) Longines Hong Kong Vase (G1), a 2400 meter (about 1 1/2 mile) trip for older horses around 2 turns of the turf oval at Sha Tin. 2019 winner Glory Vase was sent off as the 4-5 favorite in the field of 8 off a third place finish in the Sankei Sho All Comers (G2) at Nakayama after just missing in the Queen Elizabeth II Cup (G2) at Sha Tin. In to challenge him included 7-2 second choice Pyledriver, winner of the Coronation Cup (G1) at Epsom and the Churchill Stakes at Lingfield, and 5-1 third choice Mogul, last year's but 6th in his last 2 starts, the Coronation Cup and the Prix de Reux (G3) at Deauville. 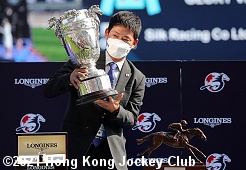 Left: Glory Vase in the winner's circle. Winning jockey Joao Moreira said, "No doubts about it, I did enjoy it so much, this win and everything in my life is to the honour of Jesus Christ, who has been in my life always and today has been a very good example. I felt Him with me and everything went as I expected. I had a smooth run, going to the fence and saving ground. I just made sure I got into the clear and I know he's a very strong horse at the finish and there was not a fight. He has proven to be the best horse today."

Right: Owner's representative of Glory Vase poses with the trophy.

The shortest of the International Races at Sha Tin is the HK$24 million (US$3.1 million) Longines Hong Kong Sprint (G1) at 1200 meters, the richest 6 furlong turf sprint in the world, and the final leg of the Global Sprint Challenge. Lucky Patch was sent off as the 2-1 favorite in the field of 12 off wins in the Premier Bowl (G2) and the Jockey Club Sprint (G2), the main local preps for this race. In to challenge him included 7-2 second choice Courier Wonder, winner of the Sha Tin Vase (G3) but fifth in both the Premier Bowl and Jockey Club Sprint, and 4-1 third choice Pixie Knight, winner of the Sprinters Stakes (G1) at Nakayama.

Jockey Damian Lane sent 47-1 Computer Patch to the lead and he set fractions of 23.89 and 45.83 while pressed by 202-1 longest shot Amazing Star and Courier Wonder. On the turn, Amazing Star broke down and fell, unseating jockey Lyle Hewitson and also bringing down Pixie Knight, Lucky Patch, and 11-2 fourth choice Naboo Attack, while 36-1 Danon Smash avoided the carnage but was eased late by jockey Yuga Kawada. 21-1 Sky Field, 10th early under Blake Shinn, took over in the stretch, outfinishing 13-1 Resistencia to win by 3/4 length in 1:08.66. It was another 3/4 length back to Courier Wonder third. Sadly, Amazing Star and Naboo Attack had to be euthanized. 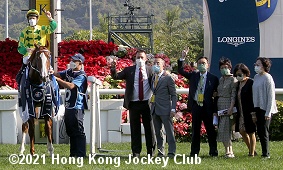 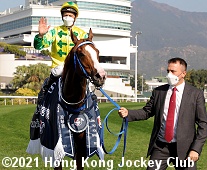 Left: Sky Field in the winner's circle. Winning trainer Caspar Fownes said, "Definitely watching the run live, it was nasty and we've got mixed emotions there. One hand you've got a horse that is trucking along at the same time in your mind you're thinking about ‘I hope the boys are alright and the horses'. It was nice to get that result with that particular horse, especially for Blake – he's been riding really well and again today another good performance, so well deserved. I've said it for a while that (Sky Field) is pretty special and I think he's got his best racing ahead of him. We've got something really nice to work with and it's nice to see him do that today."

Right: Winning jockey Blake Shinn and Sky Field pose after the race. Shinn said, "I have mixed emotions for winning this race today. Obviously, the first emotion is that my feelings are with the fallen jockeys and horses out there. It's gut-wrenching for any rider to see a horse go down. What's happened today, it's a real bitter-sweet win and in a way it's a hard win to take in the circumstances. All credit to Caspar Fownes, he's given me the opportunity to ride this lovely animal over the previous season and this season. We've always had faith in him but on the big stage things haven't always gone this way. Today, he performed to his best today and still beat a handy horse in chasing down a top-line horse in Courier Wonder and (Resistencia). He's a great horse and hopefully he can keep going forward."

In the HK$26 million (US$3.3 million) Longines Hong Kong Mile (G1), the world's richest turf mile race, a field of 10 older horses went to post for the 1600 meter (about 1 mile) trip around one turn of the Sha Tin turf. Last year's winner Golden Sixty was sent off as the 3-10 favorite off wins in the Champions Mile (G1) and Jockey Club Mile (G2). In to challenge him included 15-2 second choice Danon Kingly, a close second in the Mainichi Okan (G2) after winning the Tasuda Kinen (G1) both at Tokyo, and 13-1 third choice Salios, sixth in the Mile Championship (G1) at Hanshin.

Jockey Damian Lane sent Salios to the lead out of the chute through fractions of 24.81, 47.92, and 1:11.11 while pressed by 71-1 Lucky Express and stalked by 102-1 longest shot Vin de Garde and 18-1 Excellent Proposal. Turning for home, favorite Golden Sixty, 6th early under regular rider Vincent Ho, swept to the front and drew off late to win by 1 3/4 lengths over deep closing 43-1 More Than This in 1:33.86. It was another 1/4 length back to pacesetter Salios third. 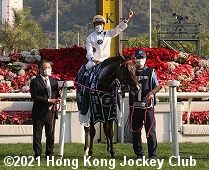 Left: Golden Sixty in the winner's circle for his record 19th win in Hong Kong. Winning jockey Vincent Ho said, "I knew he was at his best, gate two was a little bit tricky, I didn't want to be stuck on the inside but eventually the race panned out well and the pace was genuine. He's such an aggressive horse so he doesn't mind going through horses. He is amazing, I'm so grateful to be on him, I have no words for that – it's amazing. It's all about teamwork as well, without anyone from the stable we couldn't do this."

Right: Winning jockey Vincent Ho waves to the fans after the Mile. Hong Kong Jockey Club CEO Winfried Engelbrecht-Bresges said, "Golden Sixty is an incredible horse and he again showed today what a phenomenal horse he is. Francis Lui and Vincent Ho have done an incredible job and now he has bettered the record he shared with Beauty Generation and Silent Witness. Golden Sixty eclipsed world-class opposition to provide Hong Kong with pride and joy."