The Longines Hong Kong International Races are the richest horse races run in Hong Kong, and is the last major race day for Thoroughbred flat racing anywhere in the world. Billed as the "Turf World Championships", four Group 1 races were contested on Sunday afternoon over the right-handed 1 3/16 mile turf oval at Sha Tin Racecourse. Conditions were ideal for racing, with sunny skies, a daytime high of 23 C (73 F), and the turf going good. Due to ongoing COVID-19 restrictions worldwide, the races were conducted without spectators, with only officials, owners, and essential horsemen in attendance.

Hong Kong Jockey Club's CEO Winfried Engelbrecht-Bresges said, "It is important to have these global events. We are very proud that as a team, we pulled this off. There were some anxious moments and discussions about ‘How can we do this?' but in the end, we focused on the result and the results speak for themselves. The tracks were in outstanding condition, if you look at the way the horses were handled in quarantine and how the jockeys were brought into isolation facilities, everything went perfectly in challenging times. But this is the ‘can-do' spirit of Hong Kong and the playing-to-win spirit of the Jockey Club. I want to give special credit to our overseas friends because it's about trust to send your people, to send your horses on such a journey."

In the main event, a field of 8 older horses contested the HK$28 million (US$3.6 million) Longines Hong Kong Cup (G1) at 2000 meters (about 1 1/4 miles) on the turf. Irish Champion Stakes (G1) winner and British Champions (1) third place finisher Magical was sent off as the 9-5 favorite off her 2nd place finish in the Breeders' Cup Turf (G1). In to challenge her included 5-2 second choice Furore, winner of the Jockey Club Cup (G2), and 4-1 third choice Skalleti, winner of the Prix Dollar (G2) before finishing 2nd in the British Champions Stakes (G1).

Jockey Karis Teetan sent 62-1 Time Warp to the lead first time by and he set easy fractions of 25.83,50.43, and 1:14.31 while pressed by 9-2 fourth choice Danon Premium and stalked by Furore. Turning for home, Time Warp tired allowing Danon Premium to inherit the lead through 1 mile in 1:37.26, but 9-1 Normcore, 6th early under Zac Purton, found room to come through, outfinishing 9-1 Win Bright to win by 3/4 length in 2:00.50. it was a neck back to late-running favorite Magical third. 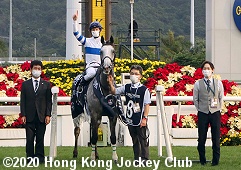 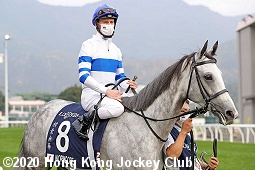 Left: Normcore in the winner's circle after the Hong Kong Cup. Winning jockey Zac Purton, who now leads all jockeys with nine Hong Kong International Race wins, said, "It's something I'm very proud of, it's a great achievement. To also now be the only jockey to win the full set of international races twice is also for myself somewhat rewarding. She (Normcore) had to fight for it, Win Bright gave a really sharp kick and his love for Sha Tin was starting to show through."

Right: Normcore returns after the race. She is the first filly or mare to win a HKIR since Ed Dunlop's champion Snow Fairy took the Cup in 2010. 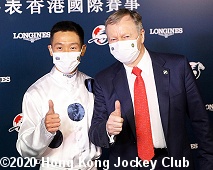 Hong Kong Jockey Club's CEO Winfried Engelbrecht-Bresges and jockey Vincent Ho. Engelbrecht-Bresges said, "Vincent Ho was a shining example of investment in the future. Vincent has definitely arrived today on the global stage as one of the really top-class jockeys. We have clear guiding principles and with daily assessment, practically from the start of the year, we have managed this crisis and created a Racing Bubble. Everybody bought into this and I want to give credit to the whole team for pulling this off." 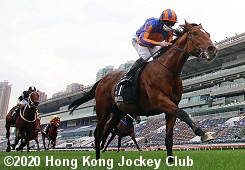 Kicking off the Longines Hong Kong International Races for 2020 was the HK$20 million (US$2.6 million) Longines Hong Kong Vase (G1), a 2400 meter (about 1 1/2 mile) trip for older horses around 2 turns of the turf oval at Sha Tin. Last year's 3rd place finisher Exultant was sent off as the 7-10 favorite in the field of 7 off a 2nd place finish in the Jockey Club Cup (G2). In to challenge him included 3-2 second choice Mogul, 5th in the Breeders' Cup Turf (G1) after winning the Grand Prix de Paris (G1), and 13-2 third choice Columbus County, third in the Jockey Club Cup. 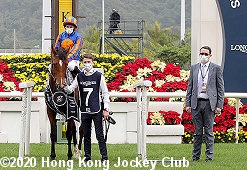 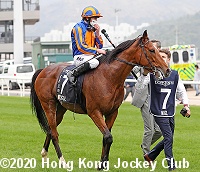 Left: Mogul in the winner's circle. Winning jockey Ryan Moore said, "He was super impressive when he won (the Grand Prix de Paris) and his Breeders' Cup run (fifth in the Breeders' Cup Turf) wasn't without merit. Today, the race worked out nicely for him, he's beaten a really solid yardstick in Exultant. He (Exultant) always seems to consistently perform to the same level and never seems to run a bad race around here. He's put them away very nicely. In reality, I was in front sooner than would have been ideal today but he took me there nicely. When he gets in front, he maybe lacks a bit of concentration still but he's a beautiful looking horse. He's got a fantastic mind and it doesn't stress him. He'll be a really nice four-year-old."

Right: Mogul returns after the race. John Manton, assistant to winning trainer Aidan O'Brien said, "He came here in very good form and Aidan was confident about him. Everything just went to plan. It worked out well, thank God. He likes a good pace, just held up and he runs home well off it. He's got a great stride and he's just a very good horse. Ryan was very happy with him and said he was just class. A push-button ride. Hopefully we'll be back here again next with him and we can do it again." 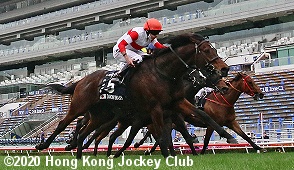 The shortest of the International Races at Sha Tin is the HK$22 million (US$2.8 million) Longines Hong Kong Sprint (G1) at 1200 meters, the richest 6 furlong turf sprint in the world, and the final leg of the Global Sprint Challenge. Last year's runner-up Hot King Prawn was sent off as the even money favorite in the field of 14 off his win in the Jockey Club Sprint (G2). In to challenge him included 5-2 second choice Classique Legend, winner of the Everest Stakes (G1) at Randwick, and 7-1 third choice Computer Patch, 2nd in both the Premier Bowl (G2) and Jockey Club Sprint. 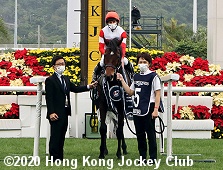 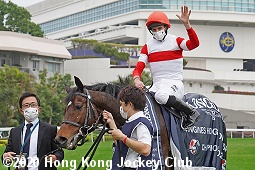 Left: Danon Smash in the winner's circle. Winning jockey Ryan Moore said, "He stepped very well and we managed to slot into a lovely spot, I was always happy and when the pace steadied around the bend, I was able to just move out and keep moving forward and he got there in plenty of time. I think when he got the draw we were all possibly a bit worried and we needed to see what happens and thankfully everything worked his way and we just had a bit of luck and everything worked out nicely."

Right: Danon Smash returns after the race. Taiki Chaki, assistant to winning trainer Takayki Yasuda said, "It is a very pleasing moment that Lord Kanaloa and Danon Smash, sire and son could achieve their Hong Kong wins – it's a happy moment." 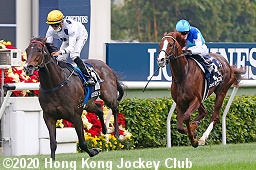 In the HK$25 million (US$3.2 million) Longines Hong Kong Mile (G1), the world's richest turf mile race, a field of 10 older horses went to post for the 1600 meter (about 1 mile) trip around one turn of the Sha Tin turf. Golden Sixty was sent off as the 3-10 favorite off wins in the Celebration Cup (G3), Sha Tin Trophy (G2), and Jockey Club Mile (G1). In to challenge him included 9-2 second choice and last year's winner Admire Mars off a 3rd place finish in the Mile Championship (G1), and 15-1 third choice Waikuku, runner-up last year but third in the Champions Mile (G1) last out.

Jockey Chad Schofield sent 27-1 Ka Ying Star to the lead out of the chute through fractions of 25.8 and 47.94 while pressed by Admire Mars and stalked by 18-1 Beauty Generation and 18-1 Order of Australia. Turning for home, Admire Mars gained the lead through 3/4 in 1;11.04, but Golden Sixty, 8th early under Vincent Ho, came out for room and rallied past the pacesetters, drawing off to win by 2 lengths in 1:33.45. It was another 1/4 length back to Admire Mars third. 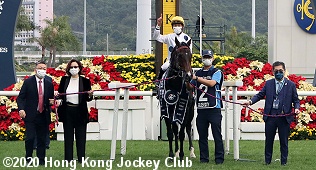 Left: Golden Sixty in the winner's circle. Winning trainer Francis Lui said, "I can have a good sleep tonight! I'm very happy – at the moment, I don't know what to say, (my heart) is still pumping. As a jockey, as a trainer, as an owner, you're dreaming of this. I was worried about the horses from Japan and Ireland but now, after this race, he has shown me that he's a champion."

Right: The socially distanced trophy presentation for the Mile with The HKJC Chairman Mr Philip N L Chen (second from left), Deputy Chairman Mr Michael T H Lee (second from right), HKJC CEO Winfried Engelbrecht-Bresges (first from left) and Ms Nancy Tse, Vice President of LONGINES Hong Kong (first from right) in attendance. Winning jockey Vincent Ho (third from left) said, "They went a little bit hard early and I was quite far back, so I just let him slide through from the 600 (metres) and it only took him a few strides to almost get to them. I tried to save him until I let him down and when I asked for him, he did it really well, he gave me a really big effort. When I hit the top of the straight, I knew. I was just cruising and I didn't think anyone could beat him in that sort of sprint. He's a horse that really wants to compete, he's the best horse in Hong Kong at the moment. Today is all about him."