We visited Stonewall Farm on Saturday for a quick stop between Lane's End and Three Chimneys. The facility was built in 2006 and so is very modern in appearance. Stallions were shown in the open area in the center of the stallion barn, which is normally lit by skylights but was dark due to the overcast conditions outside. Due to time constraints we were only able to see four of their currently full house of 12 stallions, which also includes such stakes winners as Lawyer Ron, Leroidesanimaux, and A.P. Warrior. Click the smaller photos to view a larger version. 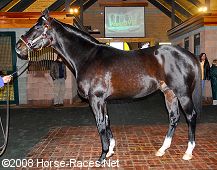 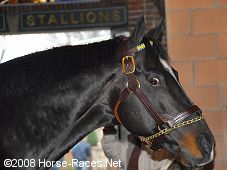 Medaglia d'Oro won the Travers, Jim Dandy, San Felipe, Whitney, Oaklawn Handicap, the Strub, and the Donn, but may be remembered for the 2003 Breeders' Cup Classic and 2004 Dubai World Cup, in each case finishing second to Pleasantly Perfect. He retired with a record of 8 wins and 7 seconds in 17 starts and $5,754,720 in earnings for owner Edmund Gann and trainer Bobby Frankel. At stud, the son of El Prado out of Balijumper mare Cappucino Bay has sired stakes winners Retraceable, C.S. Silk, Rachel Alexandra, Renda, and Retraceable. He is the highest priced stallion at Stonewall, commanding a $40,000 fee. 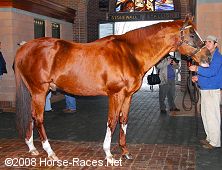 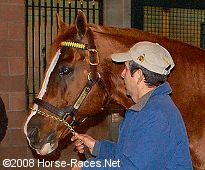 Marquetry is a 22-year-old son of Conquistador Cielo out of the Vice Regent mare Regent's Walk and stands for a fee of $7,500. On the track, he raced from age 2 to 6, with stakes wins in the Hollywood Gold Cup, New England Classic, Eddie Read, Meadowlands Cup, Bel Air, Mervyn LeRoy, and San Antonio. He retired with 10 wins in 36 starts earning $2,857,886. Retiring to stud in 1994, he has sired runners such as Artax, Squirtle Squirt, Eishin Cleburne, Chris's Bad Boy, Max's Pal, and Shilla.

Marquetry in the paddock at Hollywood Park 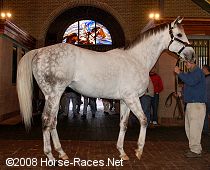 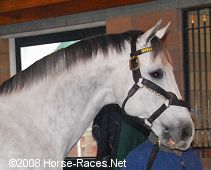 Value Plus is an 8-year-old son of Unbridled's Song out of the Rollin On Over mare Roll Over Baby. His only stakes win was in the Artax Handicap, but he finished second in the Futurity and Florida Derby and third in the Westchester. He retired with 3 wins, 4 seconds, and 1 third in 15 starts, earning $414,595. His first foals are 2-year-olds this year, and his yearlings have sold for an average price of $42,613. He stands for a $10,000 fee. 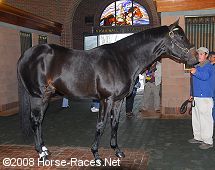 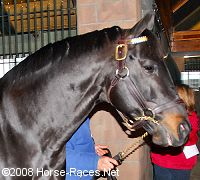 It's No Joke won the 2006 Hawthorne Gold Cup, Ack Ack Handicap, and Bet On Sunshine Handicap, was second in the Turfway Park Fall Championship, and third in the Gulfstream Park Handicap and West Virginia Governor's Stakes. The son of Distorted Humor out of the Personal Flag mare It's Personal retired with 7 wins in 16 starts, earning $685,612 for owner Stan Fulton and trainer Rebecca Maker. He stands at Stonewall for a $5000 fee. His first crop are yearlings this year, with his weanling colt out of Gone West Lady selling for $30,000 at the Keeneland November sale in 2008.