Three Chimneys in Midway did not have an open house but we were able to get a spot in their tour on Saturday afternoon. Thankfully the rains held off during the 45 minute walk through the property and the friendly and knowledgeable tour guide made it an enjoyable experience for all. The farm was founded in 1972 by Robert Clay, with the stallion division built in 1984 starting with Slew o'Gold. The property currently includes over 100 acres of rolling hills, with large paddocks, an equine cemetery where horses are buried whole, as well as a woodchip training track allowing stallions to be kept in good shape throughout the year. 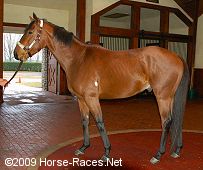 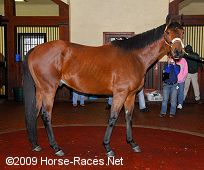 Big Brown is the newest member of the 12 stallions at Three Chimneys. He won the Florida Derby, Kentucky Derby, and Preakness Stakes, but was eased in the Belmont when he failed to show his usual kick when asked by jockey Kent Desormeaux. He came back to win the Haskell and was to be trained up to the Breeders' Cup Classic, but a recurring foot injury kept him from the race. He retired with an impressive record of 7 wins in 8 starts, earning $3,614,500 for owners IEAH Stables and Paul Pompa and trainer Richard Dutrow Jr. His 5 wins as a 3-year-old were by a combined 39 lengths and he was never asked to race full out, and he is the world's co-highweighted 3-year-old at 132 pounds. The son of Boundary out of Nureyev mare Mien will stand for $65,000 in his first season at stud. 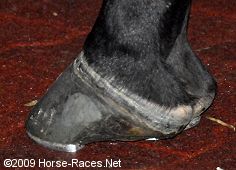 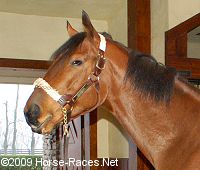 Here is a close-up of the bad hoof that plagued Big Brown throughout his racing career. He raced wearing special glue-on shoes and an acrylic patch was applied the day before he ran in the Belmont Stakes. He reinjured the hoof during a workout in preparation for the Breeders' Cup Classic, pulling a huge chunk out of it. As you can see, it still has a very long way to go before the damaged part grows back out since this is over 4 months after he injured it.

More about Big Brown with lots of photos. 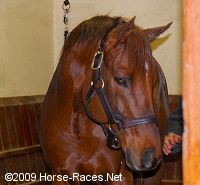 Smarty Jones was feeling "under the weather" according to farm staff after being out in the cold weather Friday, so he was not taken out of his stall. Like Big Brown, he too went into the Belmont Stakes undefeated looking for the Triple Crown sweep, but was caught in the last 1/16 mile by Birdstone to finish second in what was his final career start. He retired with 8 wins in 9 starts, with earnings of $7,613,155 as the richest Pennsylvania-bred in history. The son of Elusive Quality out of the Smile mare I'll Get Along stood for $100,000 his first four years at stud, but this year his fee is listed as "private". His first crop were juveniles in 2008, led by the filly Be Smart who was second in the Darley Alcibiades. His yearlings sell for an average of $125,935. For more photos of Smarty when he is out of his stall, check our 2007 visit to Three Chimneys.

More about Smarty Jones with lots of photos. 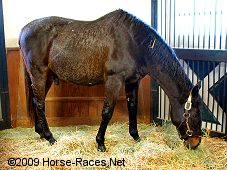 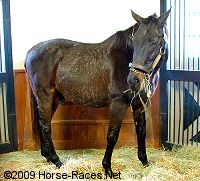 Dynaformer, who is now 24-year-old, is best known for his nasty temperament and his most famous son, 2006 Kentucky Derby winner Barbaro. With his 14 Grade 1 winners, 13 millionaires, and 14 stakes winners in 2008 alone, it is no surprise he is the highest-priced stallion at Three Chimneys at $150,000. On the track, the son of Roberto out of His Majesty mare Andover Way won the Jersey Derby and the Discovery Handicap, and was second in the Gallant Fox, retiring with a record of just 7 wins in 30 starts with earnings of $671,207. Along with Barbaro, his top runners overall include Perfect Drift, Dynever, Film Maker, Dynaforce, Rainbow View, and Riskaverse. As a side note, the bars on the door of his stall are bent outwards from his kicking them. He is about as personable as he appears here, not very! 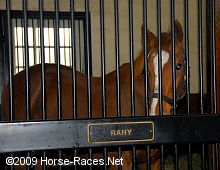 Rahy is 24 years old and has sired 14 Grade 1 winners and 12 millionaires since he entered stud duty in 1990. On the track, the son of Blushing Groom out of Glorious Song won the Bel Air Handicap at Hollywood and was second in the Goodwood at Santa Anita, retiring with a race record of just 6 wins in 13 starts, earning $343,386. His top earnings include such stars as Fantastic Light, Serena's Song, and Noverre, and most recently, Dancing Forever, True To Tradition, and full siblings Dreaming of Anna and Lewis Michael. He stands for a fee of $50,000. Unfortunately, this is the only type of photo we were able to get for many of the stallions. 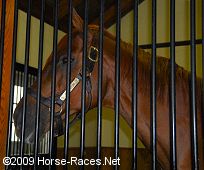 Point Given is the only horse to win 4 consecutive $1 million Grade 1 races, a feat he accomplished in 2001 when he swept the Preakness, Belmont, Haskell, and Travers, en route to Horse of the Year honors. A poor showing in the Kentucky Derby denied him the Triple Crown. The son of Thunder Gulch out of Turkoman mare Turko's Turn retired with a record of 9 wins in 13 starts, earning $3,968,500. At stud he has sired stakes winners Go Between, Sealy Hill, Point Determined, Hishi Polaris, and Air Commander. He retired with a stud fee of $100,000, but this has dropped steadily over time and he is at just $15,000 for 2009. He has also shuttled to South America for the southern hemisphere breeding season. For more photos of Point Given when he is out of his stall, check our 2007 visit to Three Chimneys.

Point Given winning the Preakness, Belmont, Haskell Invitational, and Travers in 2001.