After visiting three farms on Saturday, we visited the barn area at Keeneland Race Course. This was a beehive of activity as the various agencies were prepping their horses for the Keeneland January Horses-of-All-Ages Sale which started on the Monday. Some of the heaviest rains all day occurred while we were taking shelter in the shedrows, but there were enough breaks in the rainfall to allow the two broodmares we came to visit to be shown outside for us. 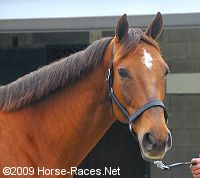 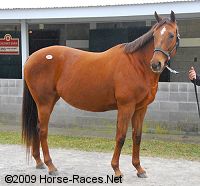 Azeri was by far the star of the sale. In 2002 as a four-year-old, she won 7 of 8 starts including the Breeders' Cup Distaff at Arlington Park, earning her Horse of the Year honors, only the third female to win the award. Her lifetime record was 17 wins (11 Grade 1 wins) in 24 starts with over $4 million in earnings. Owner Michael Paulson of the Allen Paulson Living Trust entered her in the sale while in foal to Ghostzapper, with Hill N Dale Farm as the agent, but she was bought back for $4.4 million after failing to meet the reserve. Interestingly, Paulson bought back her first foal, Vallenzeri, for a world record $7.7 million in the 2008 Keeneland September yearling auction. 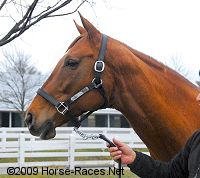 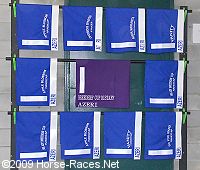 They had a nice display of saddle cloths from Azeri's 11 Grade 1 wins beside her stall. After the auction, Paulson said, "Right now we're inclined to just keep Azeri in our inventory. She's a four-time Eclipse Award champion (with three divisional titles in addition to her Horse of the Year honor), and we gave everybody an opportunity to buy a horse like that. It came real close, but it just didn't happen. For some reason, it didn't happen, so I see that as an omen that obviously we're supposed to keep her. We set a very fair reserve, and the market and us were real close. She's due to foal here in about three months, so we'll see where it goes from there, but it can't be too bad having a mare like that in your barn." 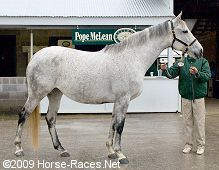 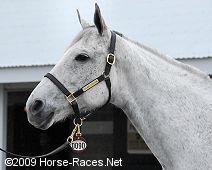 Island Fashion also drew a crowd at the barn of Crestwood Farm. The Petionville mare won 5 graded stakes and earned $2,037,970 on the track. Like Azeri, she is also in foal to Ghostzapper and was up for sale as part of the Everest Stables reduction, and was bought back at the 2006 Fasig-Tipton Kentucky fall select sale for $2 million. This time, she did sell, for just $950,000, to Katsumi Yoshida who will bring her back to Japan.

Yoshida's representative Naohiro Hosoda said, "She simply is a good racemare and she is still young, not so young, but still young, and she is carrying a Ghostzapper. If she's going to be not so much money, we were going to try for her, and Mr. Yoshida said go." Pope McLean, owner of Crestwood said, "In today's market maybe that's a fair price. She's an extremely nice mare, and I think they made a good purchase. I think they'll come out on her. She's a good investment. We have mixed emotions because we had her the whole time, and she's such a nice, hard-knocking genuine mare. It's sad to see her go. Anyway, she's got a good home, and we wish nothing but the best for her."