Light flurries fell and it was bitterly cold on Sunday morning when we visited Coolmore America's Ashford Stud in Versailles. It is a beautiful place, immaculately maintained, and you can walk around the barns to see the horses in their stalls and ask to have them taken out to view. Each barn had a walking ring for the horses to be displayed in with an extra large one by the main barn. Their top stallion is Giant's Causeway with his $125,000 stud fee, but he was not taken out of his stall due to the weather, but you can see him here from our visit in 2007. They now have 13 stallions on their roster and I have included five of them here. Click the smaller photos to view a larger version. 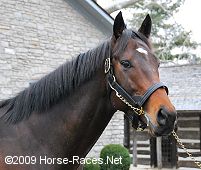 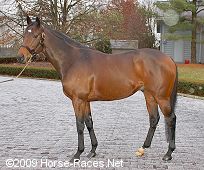 Henrythenavigator is the newest resident at Ashford, remembered by American racing fans as the runner-up to Raven's Pass in the 2008 Breeders' Cup Classic. As a 3-year-old he won four of Europe's most prestigious 1 mile races, the 2000 Guineas, the Irish 2000 Guineas, the St. James's Palace Stakes (course record), and the Sussex Stakes, all Group 1 events. As a 2-year-old he won the Coventry Stakes at Royal Ascot, also in course record time. The son of Kingmambo out of Sadler's Wells mare Sequoyah retired after the Breeders' Cup with a record of 6 wins in 11 starts, earning $2,750,538, and enters stud with an initial fee of $65,000. 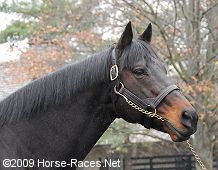 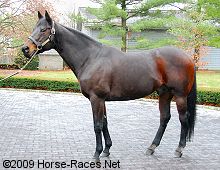 Grand Slam won the Futurity and Champagne at 2 and the Peter Pan at 3, along with runner-up finishes in the Breeders' Cup Sprint, Swaps, Jerome, and Seattle Slew. The son of Gone West out of El Gran Senor mare Bright Candles retired with a record of 4 wins, 5 seconds, and 2 thirds in 15 starts, earning $971,292. At stud, he has sired 45 stakes winners including Cajun Beat, Visionaire, Café Olympus, Limehouse, Strong Hope, and Grand Hombre. He stands at Ashford for a $25,000 stud fee.

Grand Slam at Saratoga before the 1998 Travers 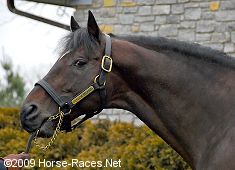 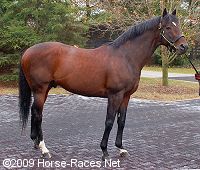 Fusaichi Pegasus is best remembered as the 2000 Kentucky Derby winner and for the $60 million paid by Coolmore to purchase him from owner Fusao Sekiguchi. Along with the Derby he also won the Wood Memorial, San Felipe, and the Jerome, and was second in the Preakness. The son of Mr. Prospector out of Danzig mare Angel Fever retired for 6 wins and 2 seconds in 9 starts, earning $1,994,400. He used to stand for a fee as high as $125,000 but in 2008 he is down to just $30,000, and shuttles to Australia for the southern hemisphere season. His stakes winners include Floral Pegasus, Hardasun, Officer(Jpn), Fifty Oner, Roman Ruler, and Andromeda's Hero.

Fusaichi Pegasus winning the Kentucky Derby and Jerome Handicap in 2000. 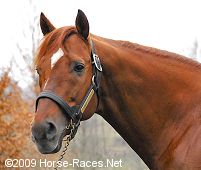 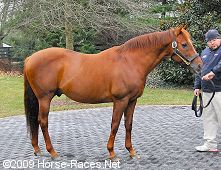 Thunder Gulch won the 1995 Kentucky Derby, Belmont, Travers, Florida Derby, Fountain of Youth, and Kentucky Cup Classic en route to championship honors. He retired with 9 wins in 16 starts, earning $2,915,086. At stud, he has sired 64 stakes winners, 32 graded, including Point Given, Spain, Recast, Circular Quay, Mystic Lady, and Balance. The son of Gulch out of Storm Bird mare Line of Thunder stands for a $15,000 fee. 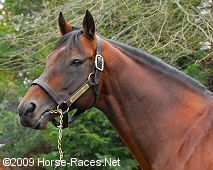 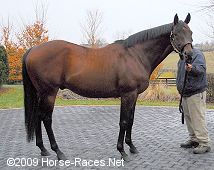 Johannesburg shocked the racing world in 2001, winning the Breeders' Cup Juvenile in his first race on dirt and his first trip longer than 6 furlongs. At home in Europe, he won the Phoenix, Prix Morny, Middle Park, Anglesey, and Norfolk, and retired with a record of 7 wins in 10 starts earning $1,014,585. The son of Hennessy out of Ogygian mare Myth commands a stud fee of $35,000, having sired such runners as Scat Daddy, Teuflesberg, Baroness Thatcher, Sageburg, Turffontein, La Traviata, and Marcavelly.