The first place we went on Saturday was Coolmore America's Ashford Stud. Although the weather was dark and gloomy, we at least didn't have rain that day. Ashford is a beautiful place and immaculately maintained. You could walk around the barns to see the horses in their stalls and ask to have them taken out to view. Each barn had a walking ring for the horses to be displayed in qith an extra large one by the main barn. They have 17 stallions and while we showed several of their stallions last year, most of the ones this year are different. Click the smaller photos to view a larger version. 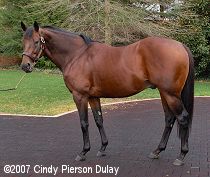 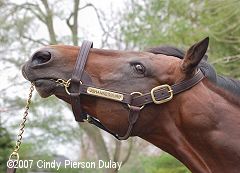 Johannesburg won the Breeders' Cup Juvenile in 2001 in his first start on dirt, capping off a 7-race undefeated season as a 2-year-old which included three Grade 1 races. Off that performance, he was named the Champion 2-year-old colt in North America, England, Ireland, and France. He is off to a quick start as a sire too with his first crop, 2-year-olds in 2006, including Scat Daddy (winner of Champagne and 2nd in the Hopeful) and Teuflesberg (winner of the Sugar Bowl and 2nd in the Sanford). By Hennessy, who is next on this page, out of Myth, Johannesburg stands for a fee of $65,000. 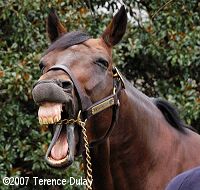 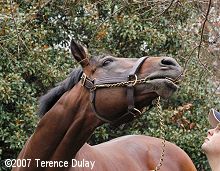 Johannesburg has quite a personality. He was showing off a lot and tried to eat a tree (right) and gave us a few big grins (left), or were they yawns?. 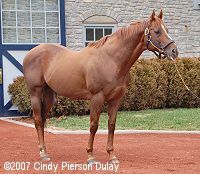 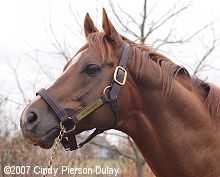 Hennessy is clearly one of the best sires by Storm Cat, and has become a sire of sires as well, with his son Johannesburg, shown above, also standing at Ashford. He had 9 starts at age two with 4 wins, including the Hollywood Juvenile Championship and was 2nd in the 1995 Breeders' Cup Juvenile. From his 7 crops to race so far, he has had 37 stakes winner. In 2006, his son Henny Hughes won the King's Bishop and the Vosburgh, the only 3-year-old to win both in the same season. Along with Henny Hughes, his Grade 1 winners include such names as Madcap Escapade, Harmony Lodge, and Grand Armee. By the great sire Storm Cat out of stakes producer Island Kitty, Hennessy stands for a fee of $60,000. 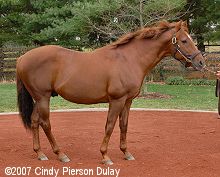 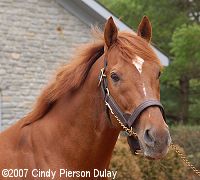 Thunder Gulch won 9 of 16 starts lifetime including the 1995 Kentucky Derby, Belmont, Travers, Florida Derby, Swaps, and Fountain of Youth Stakes as well as the Remsen in his 2-year-old season. His first year at stud was 1997 and he has had 34 stakes winners from his 8 crops to race so far. His best runners in 2006 include Hopeful and Breeders' Futurity winner Circular Quay and Santa Anita Oaks winner Balance. He is also the sire of multiple graded stakes winning mare Spain, upset winner of the 2000 Breeders' Cup Distaff, and 2001 champion 3-year-old Point Given, winner of the Preakness, Belmont, Haskell, and Travers. By Breeders' Cup Sprint winner Gulch out of Line of Thunder, Thunder Gulch stands for a fee of $30,000. 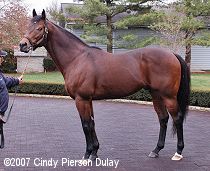 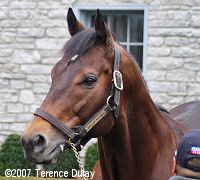 Mull of Kintyre is the newcomer to Ashford after standing at stud in Coolmore Ireland. He mostly raced at 2, winning the Gimcrack Stakes at York and finishing 4th in the 1999 Breeders' Cup Juvenile. He missed his 3-year-old season and made 5 starts at age 4 with only a 2nd and 3rd before retiring. His first crop to race included top miler Araafa, winner of the Irish 2000 Guineas and the St. James's Palace Stakes, both Group 1, and La Dancia, a Group 3 winner in Germany. By the great sire Danzig out of Retrospective, Mull of Kintyre stands for $10,000 stud fee. 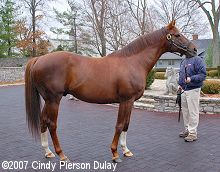 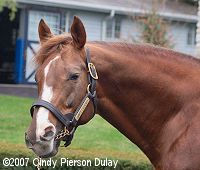 Giant's Causeway is best remembered by North American fans as the horse who finished second to Tiznow after battling the length of the stretch in the 2000 Breeders' Cup Classic, but the "Iron Horse" had already made a name for himself in Europe where he had won four Group 1 races and was named Champion 3-year-old colt. Once retired to stud, to say his offspring hit the ground running would be an understatement. They include 2006 Breeders' Cup Mile runner-up Aragorn, 2005 Hopeful and 2006 Fountain of Youth winner First Samurai, 2000 Guineas winner Footstepsinthesand, and French Derby winner Shamardal. By the great sire Storm Cat out of Mariah's Storm who was the inspiration for the movie "Dreamer", Giant's Causeway's stud fee is listed as private this year, but was $300,000 2006. 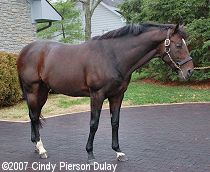 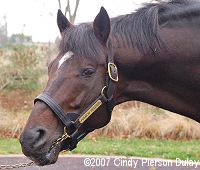 Fusaichi Pegasus won 6 of 9 lifetime starts including the 2000 Kentucky Derby, Wood Memorial, San Felipe, and Jerome Handicap. Today he wasn't very interested in posing and was trying to fall asleep standing there. In his 3 crops to race so far, he has had 13 stakes winners, including 2005 Haskell winner Roman Ruler, Blue Grass and Skip Away Handicap winner Bandini, and Andromeda's Hero who was 2nd in the 2005 Belmont. By the great sire of sires Mr. Prospector out of Angel Fever, Fusaichi Pegasus stands for a $75,000 stud fee in 2007. 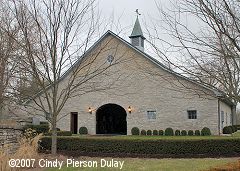 The main stallion barn at Ashford.