Sunday was very cold with occasional snow flurries, but still better weather than on Saturday. One of the farms we visited was Sheikh Hamdan’s Shadwell Farm, which we had never been to before. It is a very lovely place with beautiful barns all done in a blue and white theme. They have nine stallions standing there, headed by Breeders' Cup Classic and Dubai World Cup winner Invasor. Their open house wasn't as well advertised as some, so it was pretty quiet there with only a couple of other people visiting at the same time as us. The grooms were very friendly and helpful, bringing out any of the horses we asked to see. Below are photos of several for you to enjoy. Click the smaller photo to view a larger version. A link to a photo of each stallion when he was racing is also included where I had one. 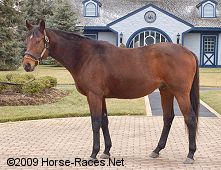 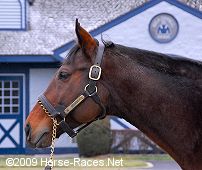 Invasor has the highest stud fee at the farm at $28,000 for 2009. With 11 wins in 12 starts and $7.8 million in earnings, he won six straight Grade 1 races, including the Whitney, Breeders' Cup Classic, and Dubai World Cup. He was named Horse of the Year for 2006 and was off to a good start in 2007 before a workout injury sent him into retirement. His first foal, a colt out of the English stakes winning mare Abby Road by Danehill, was born somewhere else on the farm the same day we visited.

Several photos of Invasor when he was racing including 5 of his 6 Grade 1 wins. 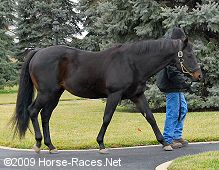 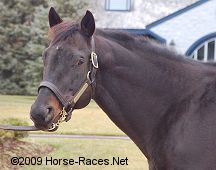 Dayjur, who will probably always best be remembered for jumping a shadow in the stretch during the Breeders' Cup Sprint to finish second to Safely Kept, stands for a stud fee of $4,000 in 2009. He was Horse of the Year in England in 1990 as well as Champion 3-year-old in France, and won 7 of 11 starts with $750,770 in earnings. As a sire, he has had 15 crops to race so far with 46 stakes winners with his best runners being millionaire Shinko Splendor and Asfurah who was Champion 2-year-old filly in Ireland. 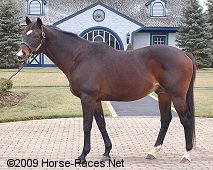 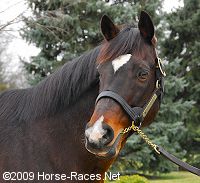 Swain stands for a stud fee of $4,000 and has 12 stakes winners so far from 7 crops to race with his best so far being Dimitrova, Stanley Park, and Nasheej. At the track, he won 10 of 22 starts and $3,797,566 with wins in the King George and Queen Elizabeth Diamond Stakes (twice) and the Irish Champion Stakes and was named Champion Older Male in England twice. He was also third in the 1996 Breeders' Cup Turf and second in the 1998 Dubai World Cup, but is probably best remembered for his wide trip down the stretch at Churchill Downs when he finished third in the 1998 Breeders' Cup Classic to Awesome Again, which jockey Frankie Dettori still gets teased for today. 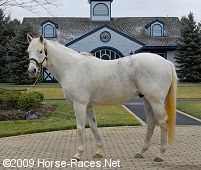 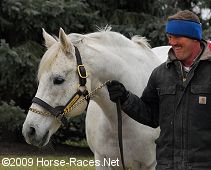 Dumaani stands for a fee of only $2,000 and has 4 stakes winners from 9 crops to race so far with his best runner being Blowin in the Wind. At the track, he was a winner in England, Dubai, Japan, and the US, with 7 wins in 26 starts and earnings of $1,079,098. He had 3 wins at a mile on the turf at Keeneland where he set a new track record. He is a beautiful gray son of Danzig and very calm and well behaved. 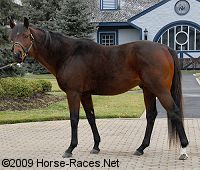 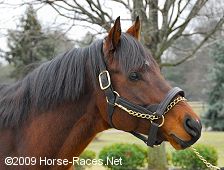 Jazil was an upset winner in the 2006 Belmont Stakes, but was unable to win again and was retired in 2007. He stands for a fee of $10,000 in 2009 and his first foal, a colt out of the Mineshaft mare Art Affair, was just born on January 14. The son of Seeking the Gold out of Better Than Honour comes from an impeccable family and is a half brother to Belmont Stakes winning filly Rags to Riches and Peter Pan winner Casino Drive.