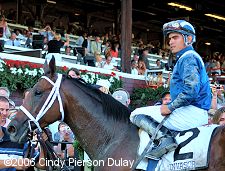 During his final workout at Belmont Park in preparation for his expected start in the Suburban Handicap next Saturday, 2006 Horse of the Year Invasor suffered a career-ending injury and was retired by his owner, Shadwell Stable. While cooling out at the barn afterward an injury became apparent, and he was immediately X-rayed, which revealed a fracture to the top of the sesamoid, a bone in the ankle and an area he had previously injured as a young horse. Shadwell vice-president and general manager Rick Nichols said that the connections elected to retire their world champion from racing, since "he's done everything we've ever asked of him. This is a huge disappointment for all of us as well as for the racing world." 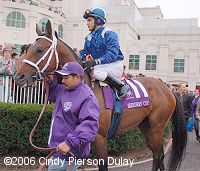 The Uruguay Triple Crown winner won 11 of 12 starts, and his last 6 races were all victories in Grade 1 competition. His lone defeat was to Discreet Cat in the 2006 UAE Derby after he was bought privately by Shadwell from his South American owners. Brought to America, he made history with trainer Kiaran McLaughlin and jockey Fernando Jara, rattling off victories in the Pimlico Special Handicap, Suburban Handicap at Belmont Park, Whitney Handicap at Saratoga, and then off a very long layoff, outfinishing Bernardini in the stretch at Churchill Downs to win the Breeders' Cup Classic. This easily earned him the titles of Champion Older Male and Horse of the Year at the Eclipse Awards. Picking up right where he left off, he won the Donn Handicap at Gulfstream and then returned to the "scene of the crime", turning the tables on Discreet Cat back at Nad al Sheba, winning the $6 million Dubai World Cup defeating Premium Tap by 2 lengths.

The Argentine-bred son of Candy Stripes retires with earnings of over $7.8 million, and will stand at stud at Shadwell Farm in Lexington, KY in 2008.

Here is a selection of photos of Invasor during his racing career. Click the photo to see more photos from that race. 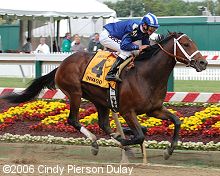 2006 Pimlico Special
Trainer Kiaran McLaughlin said afterwards, "He did surprise me a bit. We liked him, but when you're up against these type of horses, you don't know where you stand. So I'm pleasantly surprised. When he ducked to the inside, that's when he started running. I thought we were going to be a good second there for a minute, but he just kept running on." 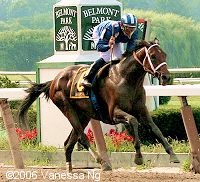 2006 Suburban Handicap
Kiaran McLaughlin said, "I told Fernando not to give up on him, because the last two times he ran, he kind of dropped back and finished well. He was always sitting there with a handful of horse and said he never asked him until the 1/8 pole. Right now, we're not going to duck anybody, so we have to pick our spots. The nice thing is that he wants to run all day. He was most impressive. He's the real deal. (Jara) is a very good rider, he just needs the horses. We're trying to give him a good jump start." 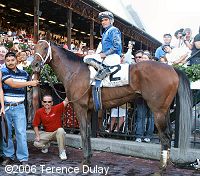 2006 Whitney Handicap
Jockey Fernando Jara said, "I just try to do my best. I wanted to stay close to (Flower Alley) because he was the horse to beat. When (Invasor) got to the lead, I thought he was waiting on horses. Once Sun King got to him, he just gave me more. He never let him by after the finish line. I'm very happy for the horse and for Kiaran." 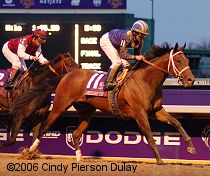 2006 Breeders' Cup Classic
This win made Fernando Jara the youngest jockey to win a Breeders' Cup race. He said, "I just tried to not have trouble and tried to save some ground the first turn. When I made the move, tried to be in the clear. I see he was going to be tough in the end. He looked strong, and when I asked my horse to give me all. He responded good, so I knew at the quarter pole I won. It's very special because it all happened in a year, like overnight. It was all a matter of working hard." 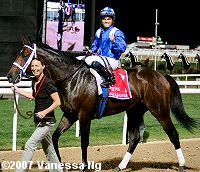 2007 Dubai World Cup
Jockey Fernando Jara said, "This is very, very special. To come to Dubai and win the world's richest race is just unbelievable. It looked like it would be a tough race and Premium Tap made it difficult for us. I thought Discreet Cat would be on the lead, but I did not see him, and just concentrated on my horse. He is such a tough horse and I owe him such a lot." Trainer Kiaran McLaughlin added, "Sheikh Mohammed hired me in 1993, but it was Sheikh Hamdan who adopted me. He's been like family to me. That's why coming back here and winning the Dubai World Cup for Sheikh Hamdan is something I won't be able to beat." 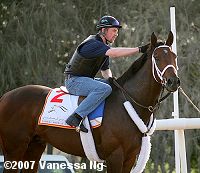