This weekend many of the farms in the Lexington area had open houses to show off their stallions before the Keeneland January Horses of all Ages sale. Since we missed last year, we came back again this year despite the less than perfect weather. Saturday was rainy and dark while Sunday was bitter cold with snow flurries, so many of the horses were shown inside the barns rather than coming out. The first farm we went to was Lane's End where the big attraction was recently retired champion Curlin, who drew a large crowd of fans.

Lane's End has 20 stallions including the recently retired 2007 Horse of the Year Curlin, 1996 Horse of the Year and top sire A.P. Indy, and leading sire for 2007 and 2008 Smart Strike. This open house was more informal and you could walk through the barns to see the horses in their stalls and ask to have one taken out to view. Since it was raining, some were only shown inside but as the rain slacked off later in the morning more were taken outside briefly for us. We couldn't include photos for all of them as there are so many, but here are several for you to enjoy. Click the smaller photo to view a larger version. A link to a photo of each stallion when he was racing is also included where I had one. 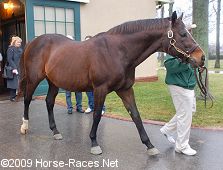 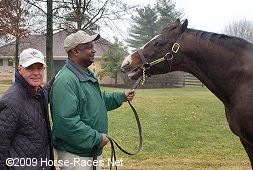 A.P. Indy is the top sire at Lane's End, commanding a $250,000 stud fee for 2009. The son of Seattle Slew was the #1 sire of Grade 1 winners in 2008 and leading sire in North America in 2003 and 2006 and #2 in 2007. His stakes winners for 2008 included Little Belle, Music Note, and Adriano. Other top winners sired by him are Bernardini, Mineshaft, Golden Missile, and Aptitude. He was no slouch at the track with 8 wins in 11 starts and over $2.9 million in earnings, including wins in the Belmont Stakes and Breeders' Cup Classic plus Horse of the Year honors. As a special treat, his jockey, Eddie Delahoussaye, was there to visit him so he was taken out of his stall and posed for photos with Eddie by his groom Asa.

A.P. Indy in the winner's circle after the 1992 Santa Anita Derby. 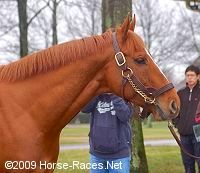 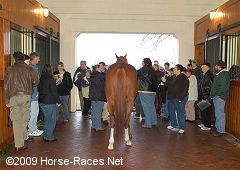 Curlin, who retired after the Breeders' Cup this year as the all-time money earner with $10,501,800 in earnings, was the big draw for the fans and had quite a crowd around him eager to finally get close and touch him. This will be his first year at stud and he will start off at a fee of $75,000. He seemed to really enjoy all the attention, but then he was always a big show-off for the fans at the track as well. 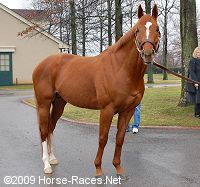 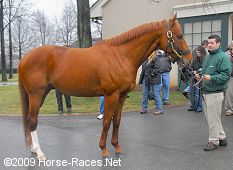 A couple more shots of Curlin when they brought him outside a bit later in the morning. 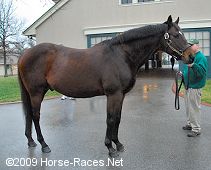 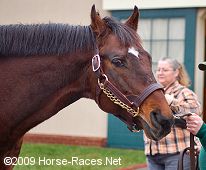 Smart Strike has topped the general sire list in 2007 and 2008, with his top runners being Curlin, English Channel, Soaring Free, and Fleetstreet Dancer. His stud fee will be $125,000 for 2009. The 17-year-old was bred and raced by Sam-Son Farms in Canada and retired with a record of 6 wins in 8 starts, including two graded wins. He has sired 56 stakes winners from 9 crops of foals, and only seems to keep getting better. 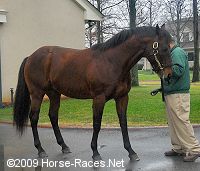 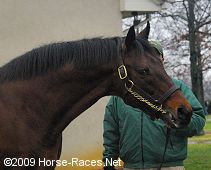 Lemon Drop Kid stood his first season at stud in 2001 and will have a fee of $50,000 this season. He has 35 stakes winners so far from 5 crops to race including Citronnade, Lemon Drop Mom, and Lemons Forever. The son of Kingmambo was a grade 1 winner at 2, 3, and 4 with over $3.2 million in earnings and was named Champion Older Male in 2000. 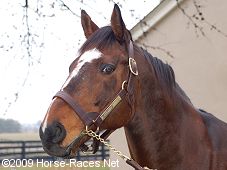 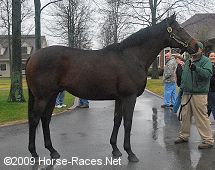 Pleasantly Perfect retired after 2004 and initially stood for a $40,000 stud fee, but will only be $15,000 in 2009. His first crop were 2-year-olds in 2008, and his best runners were Pamona Ball and Quite the Lady. The son of Pleasant Colony retired after his 6-year-old season with over $7.7 million in earnings and wins in the Breeders' Cup Classic, Dubai World Cup, and Pacific Classic. I would expect his runners to be better as they get older, so perhaps we will hear more from him in the future.

Pleasantly Perfect in the post parade for the 2003 Breeders' Cup Classic. 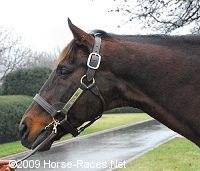 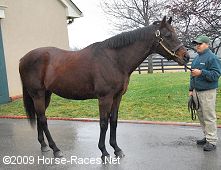 Gulch was a multiple Grade 1 winner including the Wood Memorial, Met Mile, and Breeders' Cup Sprint, and he was named Champion Sprinter in 1988. He has had 70 stakes winners from his 17 crops to race, with top runners like Thunder Gulch, Nayef, and more recently Court Vision. His stud fee is $20,000 for 2009. 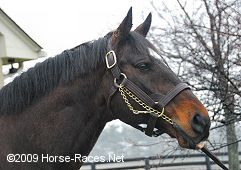 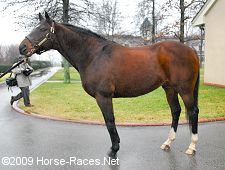 Langfuhr stood his first season in 1998 and has sired 54 stakes winners so far and was North America's leading sire of winners and #5 on the general sire list in 2007. His leading runners include Lawyer Ron, Wando, Mobil, and Jambalaya, and he will stand for a stud fee of $20,000 in 2009. He was also a good runner in his day for owner-breeder Gus Schickedanz, winning the Vosburgh, Forego, and Met Mile as well as being named Champion Sprinter in Canada. His stud fee is $20,000 for 2009. 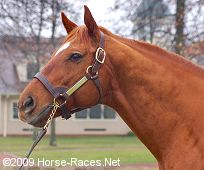 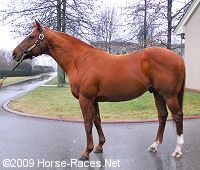 Wando entered the stud in 2006 and his first foals will be 2-years-olds in 2009. He is just as gorgeous as he was on the track and seemed to be quite gentle and good-natured. The son of Langfuhr won 11 of his 23 lifetime starts and over $2.5 million at the track. He won the 2003 Canadian Triple Crown as was also named Horse of the Year in Canada. His stud fee is only $5,000 for 2009.

Wando in the walking ring at Woodbine just before winning the final race of the Triple Crown. 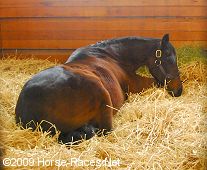 Dixieland Band is the oldest stallion at the farm at age 29 and was just pensioned last month due to his arthritis. He is sire of 115 stakes winners and the earners of $73 million so far and was one of the original three stallions at the farm. Some of his many stakes winners include Bowman's Band, Dixie Union, Drum Taps, and Del Mar Dennis. At the track, he was a stakes winner at 2, 3, and 4 year old, with wins in the Pennsylvania Derby and Massachusetts Handicap. 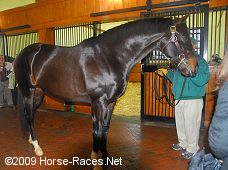 After Market before the 2007 Kelso Stakes where he finished second. 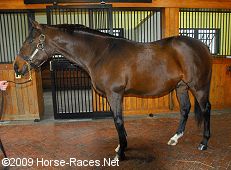 Stephen Got Even winning the 1999 Galleryfurniture.com Stakes at Turfway Park.