We were late arriving for the Hill 'N' Dale Farm open house on Sunday afternoon, but thankfully the staff at the stallion barn were willing to bring out two of their stallions for us to photograph along with Theatrical who was out in his paddock grazing. The original Hill 'N' Dale is located in Aurora, Ontario, north of Toronto, founded in 1960 by John Sikura, Jr. His son Glenn runs the Canadian operation while John G. Sikura owns the Lexington farm which opened in 1987. They have 16 stallions on their roster, and the stallion barns form three sides of a square surrounding a courtyard, with the open end facing the driveway and Seattle Slew's grave. Along with their stallion farm, they also operate one of North America's leading sales agencies, and were the consignors for Azeri who failed to meet her reserve on Monday at the Keeneland January sale. 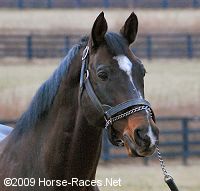 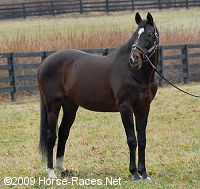 Theatrical is the oldest stallion on the grounds at age 27 and commands a stud fee of $35,000. We were fortunate to see him out in his paddock grazing in the afternoon and he still looks quite good for his age. He has sired 22 Grade 1 stakes winners and 14 millionaires, with lifetime progeny earnings of over $73 million. On the track, his Grade 1 wins include the Breeders' Cup Turf, Oak Tree Invitational, Turf Classic, Hialeah Turf Cup, Sword Dancer, Grosser Preis von Berlin, and the Bowling Green, in a career where he won 10 of 22 starts and earned $2,940,036. Among his many stakes-winning runners are: Royal Anthem, Geri, Media Puzzle, Strut the Stage, Astra, Hap, Shakespeare, Hishi Amazon, and Winchester. 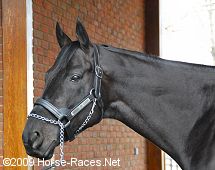 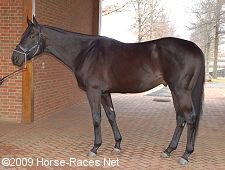 Midnight Lute retired after repeating as the Breeders' Cup Sprint champion in 2008. His win at Santa Anita was a stakes record 1:07 and earned him a 124 Beyer. Along with the two Cup wins, he also won the Perryville and the Forego, and was second in the Cigar Mile and the San Fernando. Trainer Bob Baffert said, "I've never had a horse like him. He's a beast, a massive, beautiful horse, the perfect Thoroughbred. He's the best I've ever trained. All of my clients will be breeding their best mares to him." The son of Real Quiet out of the Dehere mare Candytuft stands for an initial fee of $20,000. 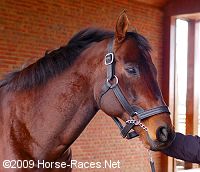 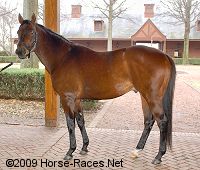 Candy Ride is an Argentine-bred best remembered for winning the 2003 Pacific Classic in track record time, to go along with his wins in the American Handicap at Hollywood and the Gran Premio Joaquin de Anchorena and Gran Premio San Isidro before coming to America. His top runners so far include Evita Argentina, Chocolate Candy, El Brujo, and Capt. Candyman Can. The son of Ride the Rails out of Candy Stripes mare Candy Girl stands for a fee of $12,500. 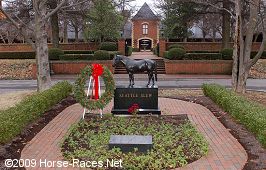 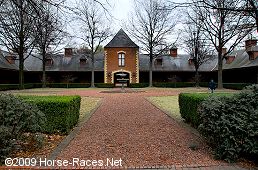 Hill 'N' Dale is also the final resting place for 1977 Triple Crown winner and legendary sire Seattle Slew. One of only eleven horses to accomplish the feat, he is also the only horse to sweep the Triple Crown undefeated. As a yearling, he sold for just $17,500 but went on to make history for owners Karen and Mickey Taylor and trainer Billy Turner. He retired with 14 wins in 17 starts and earnings of $1.2 million. Among his many stakes-winning offspring, he sired A.P. Indy, Capote, Landaluce, Slew O'Gold, Surfside, Swale, and Vindication. He died on May 7, 2002, exactly 25 years after his Derby win. To the right is a view of the lovely stallion barn courtyard which is behind the grave.