We visited WinStar Farm in Versailles on the Sunday before the Keeneland January sale. Although it was bright but overcast outside, it was bitterly cold with temperatures in the 20's so the stallions were shown indoors. The property was originally known as Prestonwood Farm, remembered for runners such as Da Hoss and Victory Gallop, but was purchased from the Preston family by Kenny Troutt and Bill Casner who renamed it WinStar in 2000. The staff both in the front office and in the barn were very friendly and willing to help, and they made it a very enjoyable visit. Below are photos of their six stallions to enjoy. Click the smaller photo to view a larger version. A link to a photo of each stallion when he was racing is also included where I had one. 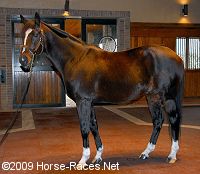 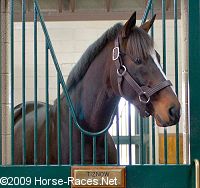 Tiznow is best known as the only horse to win the Breeders' Cup Classic twice. He stands for a fee of $75,000 in 2008, a sharp increase from the $30,000 he commanded last year, and given his stakes winners, it's easy to see why. On the track, the 2000 Horse of the Year also won the Santa Anita Handicap, Super Derby, and the Goodwood for owners Cecilia Straub-Rubens and Michael Cooper, retiring after the 2001 Breeders' Cup with earnings of $6,427,830 as the richest California-bred in history. His top runners so far include Folklore, Colonel John, Well Armed, Da'Tara, Tough Tiz's Sis, Bear Now, and Slew's Tizzy. 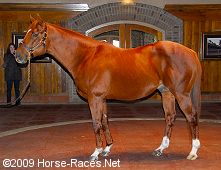 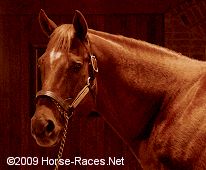 Distorted Humor is the highest-priced stallion at WinStar, commanding a fee of $150,000. He is best known as the sire of 2003 Kentucky Derby winner Funny Cide, but he has also sired other multiple graded stakes winners such as Flower Alley, Commentator, Hystericalady, Awesome Humor, and Any Given Saturday. Last year he was 4th in North American progeny earnings with over $7 million, and was also the top covering sire with an average sale price of $1,833,333. 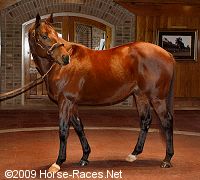 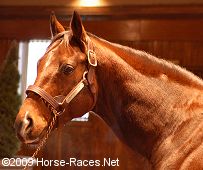 Bluegrass Cat, a son of Storm Cat out of the A.P. Indy mare She's A Winner, stands for a fee of $40,000. Trained by Todd Pletcher, he won the Haskell, Sam F. Davis, Remsen, and Nashua, and finished second in the Kentucky Derby, Belmont, and Travers. He retired due to injury after the 2006 Travers. 12 of his weanlings from his first crop cold for an average of $158,917. With his breeding he should cross well with Mr. Prospector-line mares. 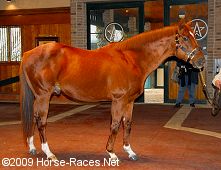 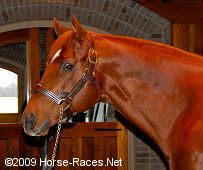 Speightstown won the 2004 Breeders' Cup Sprint for owner-breeder Eugene Melnyk earning him an Eclipse Award for champion sprinter. Along with the Breeders' Cup he also won the A.G. Vanderbilt Handicap, True North Handicap, and the Churchill Downs Handicap. The son of Gone West out of Storm Cat mare Silken Cat stands for a $35,000 fee. So far he has passed on his brilliant speed, with such runners as Haynesfield, Munnings, Reynaldothewizard and Gemswick Park in America, and Lord Shanakill in Europe. 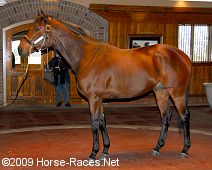 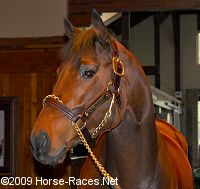 Spring At Last won the Donn Handicap and the Godolphin Mile, and was second in the Malibu and the Strub for trainer Doug O'Neill and owner J. Paul Reddam. The son of Silver Deputy out of the Dynaformer mare Winter's Gone stands for a $15,000 fee in his first year at stud. He retired at the end of 2008 with 5 wins in 13 starts earning $1,139,150. 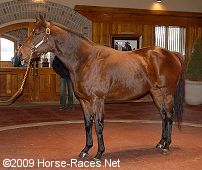 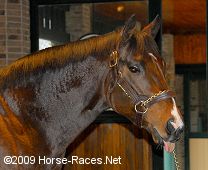 Sharp Humor joins his sire Distorted Humor at WinStar, and is out of the Hansel mare Bellona. The New York bred won the Bertram F. Bongard and the Sleepy Hollow as a juvenile, and then the Swale as a 3-year-old. He finished a hard-fought second to Barbaro in the Florida Derby, then suffered an injury in the Kentucky Derby forcing his retirement. He retired with 4 wins, 2 seconds, and 1 third in 10 starts earning $490,410. His first crop weanlings sold for an average of $49,917.