The second farm we toured was Stonewall Farm in Midway. This farm is brand new and only has 6 stallions including the recently retired Leroidesanimaux who will most likely be named Champion Turf Male for 2005, Travers and Whitney winner Medaglia D'Oro, and Hollywood Gold Cup winner Marquetry. While a few things were still under construction, the facility is gorgeous and will be truly stunning when they get the last few things finished. Their open house was more formal with race videos shown on a big screen TV between each stallion taken out to show. Here they were shown inside, so the photos will be a bit darker than at the other farms. Click the smaller photo to view a larger version. A link to a photo of each stallion when he was racing is also included where I had one.

Here are the other farms we visited: Lane's End, Afleet Alex at Gainesway, Ashford Stud, Vinery, and Gainesway Farm. 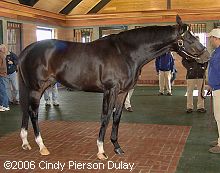 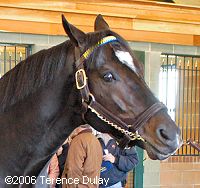 Medaglia D'Oro raced until he was five and last year was his first season at stud. He was a great racer, winning 8 of 17 starts along with 7 seconds and over $5.7 million in earnings. He is the only horse to ever win the Jim Dandy, Travers, and Whitney at Saratoga. Other big wins include the Donn and Oaklawn Handicaps. He might be better remembered for this two second place finishes in the Breeders' Cup Classic behind Volponi and Pleasantly Perfect. He retired in 2004 after finishing second to Pleasantly Perfect in the Dubai World Cup. He was not a great poser and I don't think he liked so many people around.

Medagia D'Oro in the post parade for the 2003 Breeders' Cup Classic. 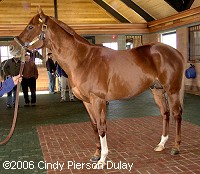 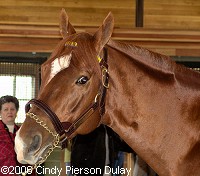 Leroidesanimaux just retired after an excellent season and will likely earn him an Eclipse Award for Champion Turf Male. He won 8 consecutive races in North America including the Atto Mile, Citation Handicap, and Fourstardave Handicap. He just missed winning the Breeders' Cup Mile, finishing second to Artie Schiller by 3/4 of a length, in his final start before retiring. The Brazilian-bred son of Candy Stripes will stand for a $30,000 stud fee this year. He is a beautiful chestnut with a very kind looking face and seemed to love posing for people.

"Leroy" in the winner's circle at Saratoga. 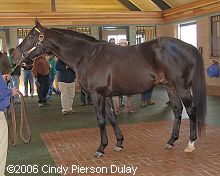 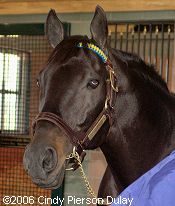 Doneraile Court is a 10-year-old son of Seattle Slew who commands a $10,000 stud fee this year. He has 21 stakes horses from 2 crops including graded winner Ruler's Court. A $1,000,000 yearling himself, he won 6 of 16 starts including the Jereome Handicap and Nashua Stakes. He definitely has his daddy's looks. 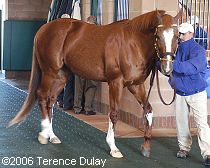 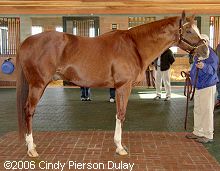 Marquetry is a gorgeous chestnut with very flashy white markings who will stand for a $7,500 stud fee this year. The 19 year old still looks quite fit for his age. At the track, he won 19 times in 36 starts with earnings of over $2.8 million, including the Hollywood Gold Cup, Eddie Read Handicap, and Meadowlands Cup. He has sired 55 stakes horses so far including Breeders' Cup Sprint winners Artax and Squirtle Squirt. Rather than a head shot, I am including a second shot that shows his markings better since they are so striking.

Marquetry in the paddock at Hollywood Park. 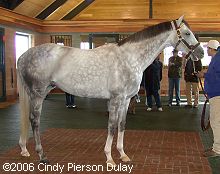 Value Plus was grade 1 placed at age 2 and 3, including a close second in the Florida Derby. The son of Unbridled's Song will stand for a $10,000 stud fee this year. He was a very calm horse and posed nicely for the camera. 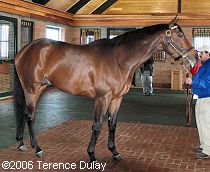 Unforgettable Max is a full brother to Afleet Alex. While nowhere as good as his younger brother, he was a stakes winner and placed in graded stakes in New York, including a 3rd place finish behind Ghostzapper in the Tom Fool Handicap. His stud fee is only $7500 for now and if you get a stakes winner using him, you get a complimentary return season.