The third farm we visited was Ashford Stud which has 18 stallions including European champion Giant's Causeway, Arlington Million winner Powerscourt, and Kentucky Derby winner Fusaichi Pegasus. This open house was also more informal and you could walk through the barns to see the horses in their stalls and ask to have one taken out to view. There was a large walking ring outside the main stud barn as well as smaller ones at each of the other barns. We couldn't include photos for all of the stallions as there are so many, but here are several for you to enjoy. Click the smaller photo to view a larger version. A link to a photo of each stallion when he was racing is also included where I had one.

Here are the other farms we visited: Lane's End, Stonewall Farm, Afleet Alex at Gainesway, Vinery, and Gainesway Farm. 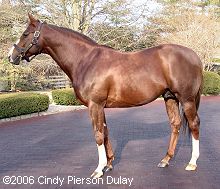 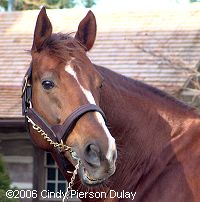 Giant's Causeway is their most expensive stallion with a $300,000 stud fee, and for good reason. He is a multiple graded stakes winner in Europe, winning the Irish Champion Stakes and International Stakes, he also finished 2nd by a neck to Tiznow in the Breeders' Cup Classic. At stud he is already the sire of four grade 1 winners including the undefeated Shamardal and First Samurai, one of last year's top juveniles in the US. He was a very gentle horse and posed nicely for the camera and didn't mind being petted at all.

Giant's Causeway in the post parade for the 2000 Breeders' Cup Classic. 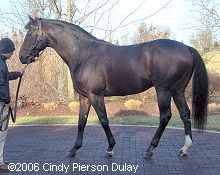 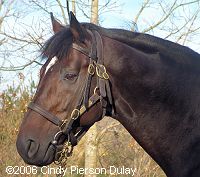 Fusaichi Pegasus is the second most expensive with a $125,000 stud fee. The son of Mr. Prospector is best remembered as the winner of the 2000 Kentucky Derby, but he is making a mark for himself as a sire now too. Among his top runners are Blue Grass Stakes winner Bandini and Haskell Invitational winner Roman Ruler. He is a large and imposing horse with great presence.

Fusaichi Pegasus in the post parade before the Kentucky Derby.. 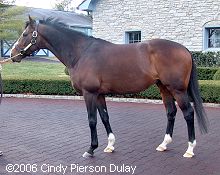 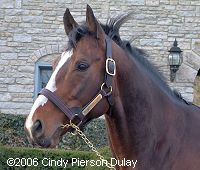 Powerscourt retired after 2005 with a record of 21 starts, 5 wins, 6 seconds, 3 thirds, and $1.9 million in earnings. The son of Sadler's Wells was a graded stakes winner in England and shipped to the US to win the Arlington Million twice, although he was disqualified the first time. He was a bit more excitable but still was quite good about posing for pictures.

Powerscourt working out before the 2004 Breeders' Cup Turf.. 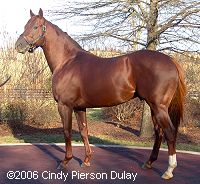 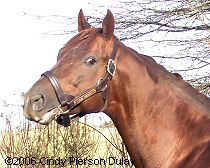 Lion Heart retired after the 2004 season and will stand for $30,000 this year. Perhaps best remembered for finishing 2nd to Smarty Jones in the Kentucky Derby, he also won the Haskell Invitational, beating Rock Hard Ten, and had total earnings of over $1.3 million. His sire, Tale of the Cat, is also at Ashford and pictured below. Lion Heart is a beautiful chestnut and was very interested in everything that was going on, but still managed to strike a pose for us.

Lion Heart walking over to be saddled before the 2004 Preakness. 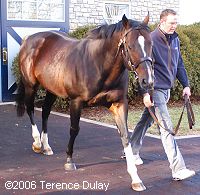 Tale of the Cat stands for a fee of $50,000. The son of Storm Cat was the champion 2-year-old sire in 2003 and has graded stakes winners in the US and Australia. His top runners include Lion Heart (above), Humana Distaff winner My Trusty Cat, New Zealand-bred Glamour Puss, and Iroquois winner Catcominatcha. He is an odd sort and refuses to wear a blanket, so his stall has plexiglass over the windows to keep it warmer. He also will bite at himself so wears a collar in his stall to keep him from doing that.

Tale of the Cat in the winner's circle after the 1998 King's Bishop Stakes at Saratoga. 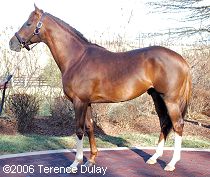 Van Nistelrooy was the highest priced yearling of 2001 at $6.4 million and won 3 of 6 starts as a 2-year-old in England and Ireland then was retired. He stands for a modest $7,500 stud fee and his first babies are yearlings this year.

Van Nistelrooy working out before the 2002 Breeders' Cup Juvenile. 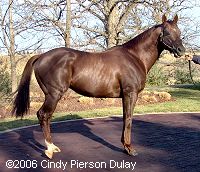 Hold That Tiger is another son of Storm Cat and stands for $12,500 this year. He is probably best remembered in the US as finishing 3rd in the Breeders' Cup Juvenile to Vindication and Kafwain, although he was a grade 1 winner in France as a 3-year-old and shipped over to the US to be 2nd in the Woodward to Mineshaft.

Hold That Tiger in the post parade for the 2002 Breeders' Cup Juvenile.