The final farm on our tour is Gainesway Farm which has 12 stallions including the recently retired Afleet Alex, Breeders' Cup Mile winner Cozzene, and Belmont and Travers winner Birdstone. This open house was fairly organized with the stallions brought out one at a time to pose in front of the breeding shed, except for Afleet Alex who was in a separate location. They had a nice buffet set up in the breeding shed with really excellent food and desserts plus an open bar. Judging by the number of people there, this was a very popular open house with the locals. Because of his popularity, Afleet Alex has his own page of photos and does not appear here.

Below are photos of several of the stallions. Click the smaller photo to view a larger version. A link to a photo of each stallion when he was racing is also included where I had one.

Here are the other farms we visited: Lane's End, Stonewall Farm, Ashford Stud, and Vinery. 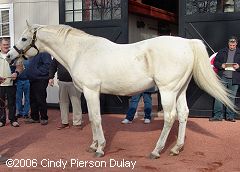 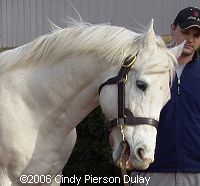 Cozzene at 26 years old is still going strong with a $40,000 stud fee. At the track, he was the Eclipse Champion Turf Male and won the Breeders' Cup Mile in 1985, also finishing 3rd the Mile in 1984. Overall he won 10 of 24 starts and almost $1 million on the track. At stud the son of Caro has been just as successful, siring two Breeders' Cup winners with Alphabet Soup in the Classic and Tikkanen in the Turf. He has sired 12 millionaires, 4 champions, 30 graded stakes winners, and 66 stakes winners. He still looks pretty good for an old guy and hopefully will be around for several more years. 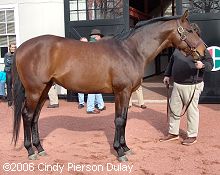 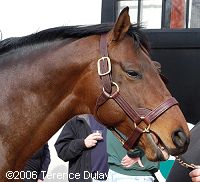 Birdstone is probably best remembered for stopping Smarty Jones' Triple Crown bid, although he also won the Travers. Overall, the son of Grindstone won 5 of 9 starts and over $1.5 million and stands for a stud fee of $10,000. He retired at the end of 2004 and his first foals will arrive this year. He is still a very small and not very impressive looking horse, although he has filled out a bit since retiring.

Birdstone in the post parade before the Breeders' Cup Classic. 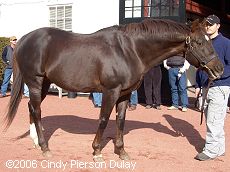 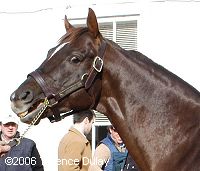 Mr. Greeley is 14 years old and will stand for a stud fee of $35,000 this season. At the track, the son of Gone West won 5 of 16 starts including the Swale and Lafayette Stakes and finished 2nd in the Breeders' Cup Sprint. At stud he has sired 10 graded stakes winners including Cigar Mile winner El Corredor, Mother Goose winner Nonsuch Bay, and Illinois Derby winner Greeley's Galaxy. In the 2005 September Keeneland Sale, he had a $2.7 million yearling filly sold. He seemed a bit upset at all the people around, but didn't make too much fuss. 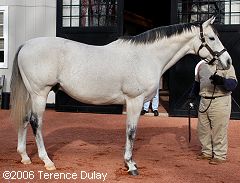 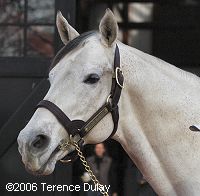 Smoke Glacken has really lightened up since he got older. The 12 year old son of Two Punch won 10 of 14 starts at the track, including the Hopeful, De Francis Memorial Dash, and Riva Ridge Stakes, and was named Champion Sprinter of 1997. So far he has sired over 20 stakes winners including Smok'n Frolic, Read the Footnotes, and Smokume and stands for a stud fee $30,000. He was very calm about the whole open house thing and didn't seem bothered at all. 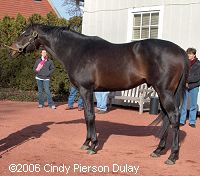 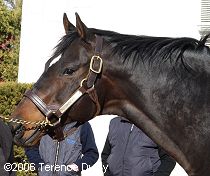 Orientate was the Eclipse Champion Sprinter in 2002 and stands for a stud fee of $20,000. The son of Mt. Livermore won 5 of 9 races and over $1.5 million at the track, including wins in the Breeders' Cup Sprint, Forego Handicap, and Indiana Derby. His first crop yearlings sold for as much at $400,000 and his first 2-year-olds will be racing this year.

Orientate in the winner's circle after the Breeders' Cup Sprint. 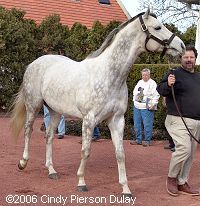 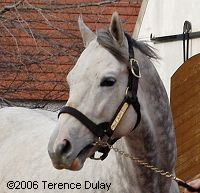 Tapit had a very short career with 3 wins in 6 starts, with his biggest win coming in the Wood Memorial. The son of Pulpit stood his first season at stud in 2005 and his first foals will arrive this year and he stands for a stud fee of $15,000. He still looks much like he did at the track, only a bit lighter so far. He was very interested in all the open house activity and had to keep an eye on everyone.

Tapit in the post parade before the Florida Derby. 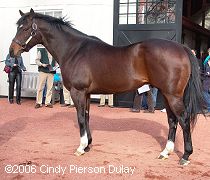 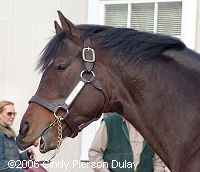 Officer retired after his first race as a 3-year-old with 6 wins in 9 starts, including the Champagne and Del Mar Futurity. The son of Bertrando entered the stud in 2003 and his first crop will be 2-year-old this year. He will stand for a stud fee of $15,000 this year. He is still a very fit looking horse and was very laid back.

Officer in the post parade before the Breeders' Cup Juvenile.