The next farm on our tour is Vinery which has 11 stallions including the recently retired Cigar Mile winner Purge, leading second crop sire More Than Ready, and Breeders' Cup Juvenile winner Gilded Time. This open house was very organized with the stallions brought out one at a time to pose in the walking ring between the stallion barn and breeding shed. They were giving out hats to everyone and had hot food and a bar set up, making this a popular open house.

Below are photos of several of the stallions. Click the smaller photo to view a larger version. A link to a photo of each stallion when he was racing is also included where I had one.

Here are the other farms we visited: Lane's End, Stonewall Farm, Afleet Alex at Gainesway, Ashford Stud, and Gainesway Farm. 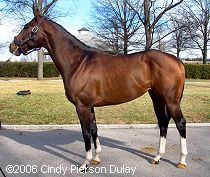 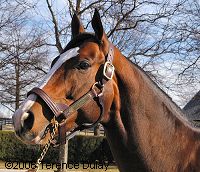 Purge won the 2005 Cigar Mile and has now been retired to stud for a fee of $20,000. The son of Pulpit raced 15 times from age 2 to 4 and won 6 races including the Cigar Mile, Peter Pan, and Jim Dandy Stakes. He was very interested in the people coming in and out of the breeding shed but was pretty calm overall.

Purge in the post parade before the Cigar Mile. 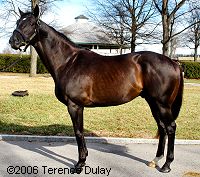 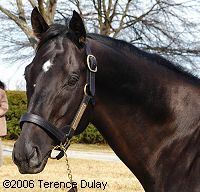 More Than Ready was an excellent 2-year-old who was able to progress and be a good 3-year-old as well, a rare thing these days. He won his first stakes, the WHAS-11 Stakes, on the Kentucky Derby undercard in 1999 and returned the next year to run 4th in the Derby behind Fusaichi Pegasus. The son of Southern Halo had 7 wins in 17 career starts with earnings just over $1 million and stands for a stud fee of $30,000. He is off to a quick start as a sire too and was the leading 2nd crop sire in 2005 with 15 stakes winners.

More Than Ready in the post parade before the Kentucky Derby. 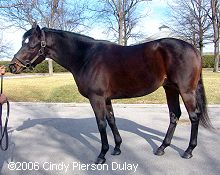 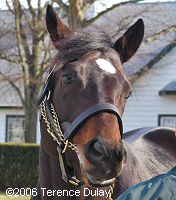 The Cliff's Edge won or placed 9 times in 13 career starts with earnings of over $1.2 million. His victories included the Toyota Blue Grass Stakes and he was second in the Travers. The son of Gulch stands for a fee of $20,000 and his first foals arrive this year. He was a very calm horse and didn't seem to like to hold his head up.

The Cliff's Edge in the post parade before the Florida Derby. 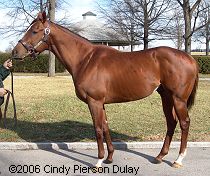 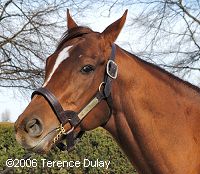 Limehouse raced at age 2, 3, and 4 and was retired after a 6th place finish in the Breeders' Cup Mile. The son of Grand Slam won 7 of 21 career starts with earning of over $1.1 million and stand for a stud fee of $17,500. His wins included the Brooklyn Handicap, Alysheba Stakes, and the Tampa Bay Derby. He was also 4th in the Kentucky Derby. He was a very alert horse and didn't seem to be bothered by all the people around.

Limehouse in the post parade before the Brooklyn Handicap. 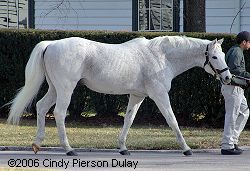 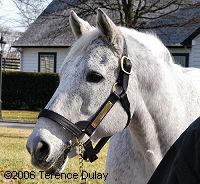 Runaway Groom is 27 years old and stands for a fee of $12,500. He was the oldest stallion we saw this weekend, but still looked in good shape for an old guy. He was the Champion 3-Year-Old in Canada back in 1982 and also won the Travers at Saratoga. At stud, he has sired 69 stakes winners and 29 graded stakes winners including Breeders' Cup Sprint winner Cherokee Run and Suburban Handicap winner Wekiva Springs. 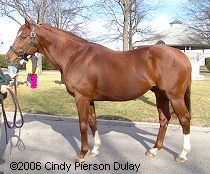 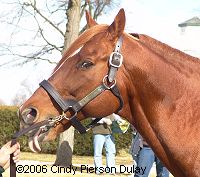 Gilded Time had a short but brilliant career which included winning the Breeders' Cup Juvenile then running 3rd in the Breeders' Cup Sprint the next year. The son of Timeless Moment stands for a $12,500 stud fee and has 44 stakes winners from 9 crops so far. His top runners includ Ashland Stakes winner Elloluv, Ruffian Handicap winner Mandy's Gold, and Pat O'Brien Handicap winner Old Topper. He is still a very flashy and muscular looking chestnut at age 15.

Gilded Time during morning works before the Breeders' Cup.