This weekend several of the farms in the Lexington area had open houses to show off their stallions before the Keeneland sale that started today. We decided to drive down for the weekend and attend a few and take photos of some of the stallions. This is the first farm we visited with three more to follow. I would definitely recommend this trip to anyone who is a fan of racing as you get to be up close to many of the past or recently retired stars plus you get to see a side of racing that the average fan at the track never sees. The staff at the farms are friendly and most if not all the stallions will be brought out, paraded, and posed for photos. We even got to pet some of the calmer stallions which was a treat.

Here are the other farms we visited: Stonewall Farm, Afleet Alex at Gainesway, Ashford Stud, Vinery, and Gainesway Farm.

Lane's End has 22 stallions including the recently retired Breeders' Cup Classic winner Saint Liam, 1996 Horse of the Year A.P. Indy, 2003 Horse of the Year Mineshaft, Canadian Triple Crown winner Wando, and Breeders' Cup Classic and Dubai World Cup winner Pleasantly Perfect. This open house was more informal and you could walk through the barns to see the horses in their stalls and ask to have one taken out to view. There was a large walking ring in the middle of the barns for viewing as well as smaller areas at each of the barns. We couldn't include photos for all of them as there are so many, but here are several for you to enjoy. Click the smaller photo to view a larger version. A link to a photo of each stallion when he was racing is also included where I had one. 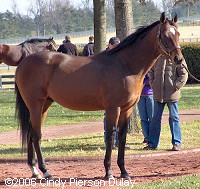 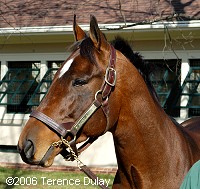 Saint Liam was just retired after his Breeders' Cup Classic win in October and will stand for a $50,000 stud fee this year. He still looked quite fit and was very interested in all the activity going on around him. The son of Saint Ballado won 9 of his 20 lifetime starts and over $4.4 million at the track.

Saint Liam in the post parade for the Whitney Handicap. 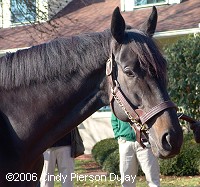 Rock Hard Ten missed his chance to compete in the Breeders' Cup due to a workout injury only days before the race. He will also stand for a $50,000 stud fee this year. He seemed totally bored with it all and almost dozed off as he was standing still for viewings. The son of Kris S. won all three starts this year and 7 of his 11 lifetime starts, including the Santa Anita Handicap and the Goodwood Breeders' Cup

Rock Hard Ten working out the day he was injured at Belmont Park.. 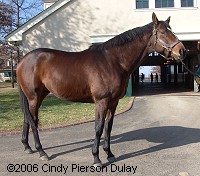 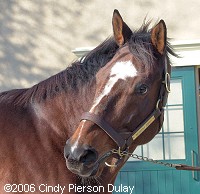 Pleasantly Perfect retired after 2004 and stands for a $40,000 stud fee. He was very interested in the activity during the open house and seemed to enjoy posing for the cameras. The son of Pleasant Colony retired after his 6-year-old season with over $7.7 million in earnings and wins in the Breeders' Cup Classic, Dubai World Cup, and Pacific Classic.

Pleasantly Perfect in the post parade for the 2003 Breeders' Cup Classic.. 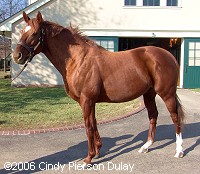 Wando was just retired early in 2005 and will stand for a $10,000 stud fee this year. He is just as gorgeous as he was on the track, although he has beefed up a bit. He is very gentle and friendly and you could pet him just about anywhere and he didn't mind a bit. His groom also said he was very good about not rolling in the mud when he is out in his paddock, making his job easier. The son of Langfuhr won 11 of his 23 lifetime starts and over $2.5 million at the track. He won the 2003 Canadian Triple Crown as was also named Horse of the Year in Canada that season.

Wando in the walking ring at Woodbine just before winning the final race of the Triple Crown. Langfuhr stood his first season in 1998 and has sired 54 stakes winners so far and was North America's leading sire of winners in 2005. He was also a good runner in his day, winning the Vosburgh, Forego, and Met Mile as well as being named Champion Sprinter in Canada. His son Wando gets his good disposition from him, as he was also very laid back and gentle. By the recently deceased Danzig, his offspring won over $5.3 million worldwide in 2005. 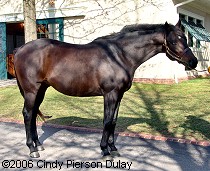 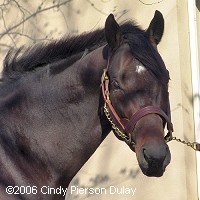 Mineshaft was named Horse of the Year in 2003 after a season that included wins in the Jockey Club Gold Cup, Pimlico Special, Suburban Handicap, and Woodward Stakes. The son of A.P. Indy stands for a $100,000 stud fee and his first foals are yearlings this year. He was a very relaxed and laid-back horse who seemed a bit shy. 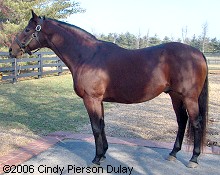 Lemon Drop Kid stood his first season at stud in 2001 and will have a fee of $30,000 this season. The son of Kingmambo was a grade 1 winner at 2, 3, and 4 with over $3.2 million in earnings and was named Champion Older Male in 2000. He has gained weight since retiring, but was a very willing subject for photos. 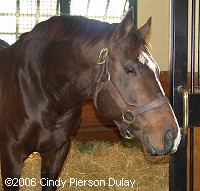 A.P. Indy is the top sire at Lane's End, commanding a $300,000 stud fee. The son of Seattle Slew was the #1 sire of graded stakes winners in 2005, #1 sire of stakes winners in 2004, and leading sire in North America in 2003. His stakes winners for 2005 included Sweet Symphony, Suave, and Congrats. Other top winners sired by him are Mineshaft, Golden Missile, and Aptitude. He was no slouch at the track with 8 wins in 11 starts and over $2.9 million in earnings, including wins in the Belmont Stakes and Breeders' Cup Classic and Horse of the Year honors. He was one of the few that was not brought out of his stall, but they did open the door so we could pet him and take photos.

A.P. Indy in the winner's circle after the 1992 Santa Anita Derby. 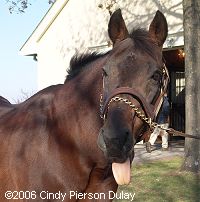 Dixieland Band is the oldest stallion at the farm at age 26, but still commands a $50,000 stud fee. He is the top active son of Northern Dancer in North America and the leading active broodmare sire in 2005. Some of his many stakes winners include Bowman's Band, Dixie Union (who is in the stall across from him at Lane's End), Del Mar Dennis, and Sharp Lisa who was his top runner last year. At the track, he was a stakes winner at 2, 3, and 4 year old, with wins in the Pennsylvania Derby and Massachusetts Handicap. The old guy enjoys his peppermints and likes to lick a lot after he has one as you can see in this photo.