Sunday afternoon it was pouring rain by the time we got to Stonewall Farm which has 8 stallions, including Champion Turf Male for 2005 Leroidesanimeaux, Travers and Whitney winner Medaglia D'Oro, and Hollywood Gold Cup winner Marquetry. Last year they were still building things, but this year everything is finished and it really is a beautiful facility. Too bad the photos all looks so gloomy due to the rain. The horses were brought out one at a time and shown in the center of the stallion barn, which was quite dark due to the weather, so all the photos are with flash. Here are photos of several for you to enjoy. Click the smaller photo to view a larger version. 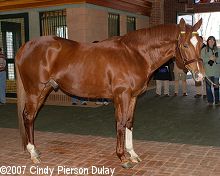 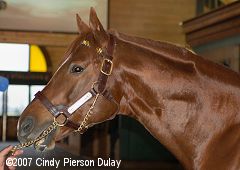 Leroidesanimeaux was the world highweight at a mile on turf in 2005, off his eight race win streak which included three Grade 1's, the Citation, Atto Mile, and Frank E. Kilroe Mile. He also won the Fourstardave at Saratoga in course record time. The Brazilian-bred made his final career start as the favorite in the Breeders' Cup Mile, finishing second to Artie Schiller at Belmont Park. He earned over $1.6 million on the track, with 9 wins and 2 seconds in 13 starts. His first foals arrive this year. The son of Candy Stripes out of Dissemble stands for a fee of $25,000. 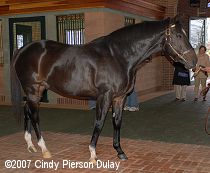 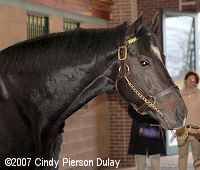 Medaglia d'Oro may have retired with a reputation for finishing second in Grade 1 events, which he did in the Belmont, Pacific Classic, Dubai World Cup, the 2003 Breeders' Cup Classic, and the 2002 Breeders' Cup Classic, but he did in fact reach the winner's circle in the Travers Stakes, Whitney Handicap, and the Donn Handicap. In his 17 starts he won 8 times, with career earnings of over $5.7 million for owner Edmund Gann and trainer Bobby Frankel. His first foals will be yearlings this year. The son of El Prado out of Cappucino Bay stands for a fee of $40,000. 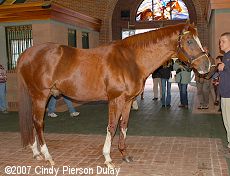 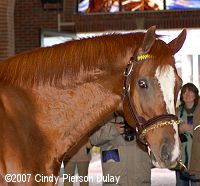 Marquetry has already proven himself as a sire, with 26 stakes winners including two winners of the Breeders' Cup Sprint, Squirtle Squirt and Artax. As well, he is the sire of Real Napkin, Stella Grande, and Chris's Bad Boy. His nine crops to race so far have earned over $30 million, with 70% winners. In a five-year racing career, Marquetry started 36 times with 10 victories with earnings of over $2.8 million, with Grade 1 victories in the Hollywood Gold Cup, Eddie Read Handicap, and the Meadowlands Cup. The son of Conquistador Cielo out of Regent's Walk stands for a fee of $7,500. 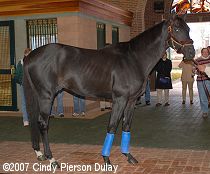 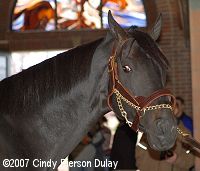 It's No Joke closed out his racing career with an impressive gate-to-wire performance in the Grade 3 Ack Ack Handicap at Churchill Downs on the Breeders' Cup undercard. In 16 starts he won 7 times, including the Hawthorne Gold Cup and the Bet On Sunshine Handicap, earning a total of $685,612 over three years. The son of Distorted Humor out of It's Personal stands for a fee of $10,000. 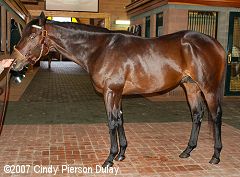 A.P. Warrior retired to stud at the end of the 2006 season, having raced his entire career in California. He raced at 2 and 3, with 4 wins, 2 seconds and 3 thirds in 13 career starts, including two Grade 2 stakes victories, in the San Felipe Stakes on dirt and the La Jolla Handicap on turf. A consistent performer, he was worse than fourth only twice, in the Kentucky Derby and the Del Mar Futurity. He earned $548,595 for trainer John Shirreffs and owner Stan Fulton. The son of A.P. Indy out of Warrior Queen stands for a fee of $20,000. 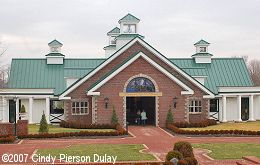 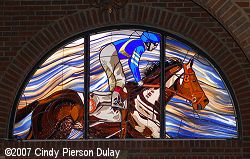 The main stallion barn at Stonewall and a close-up of the stained glass window above the door on the right. This was taken from the inside so the light outside would make it show up nicely.

You can see more of the Stonewall stallions on last year's farm tour.