A short field of 9 older horses went 1 1/2 miles around 3 turns of the Matt Winn Turf Course in the $3 million Emirates Airline Breeders' Cup Turf (G1). Sarafina was sent off as thd 2-1 choice off her wins in the Grand Prix de Saint Cloud (G1). In to challenge her included 3-1 second choice Sea Moon, third in the Ladbrokes St Leger (G1) last out, and 5-1 Midday, off a fourth place effort in the QIPCO Champion Stakes (G1). 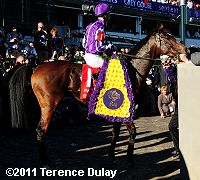 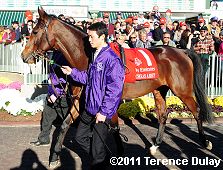 Left: St Nicholas Abbey in the winner's circle. Owner Derrick Smith said, "Everything came together today.  He's always been a brilliant horse.  We always had immense confidence in him. Somebody asked me today, when did you know he was going to win?  Before the race because that's how confident Aidan was today." Trainer Aidan O'Brien added, " “This is very special.  Unbelievable.  It was a wonderful race.  He (son Joseph O’Brien, winning jockey) is an amazing rider. It’s been a great day. It’s been a great day. Thank you very much.”

Right: St Nicholas Abbey in the paddock before the race. Jockey Joseph O'Brien, son of trainer Aidan, said, “It’s a dream come true. I rode him twice before and this is my first time winning on him. He relaxed lovely. We had a nice pace and he picked up where it mattered. It wasn’t a mad pace and he was comfortable and relaxed great. Obviously today it’s an easier track for him (than Longchamp). I think he was a little better going left-handed here than right-handed in the Arc (de Triomphe). The Arc was a rough race and sometimes the best horse doesn’t always win. He traveled well today and looked great and picked up great.” 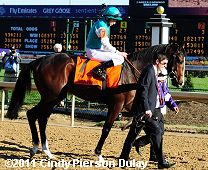 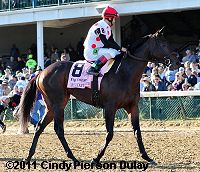 Left: Second place finisher Sea Moon in the post parade. Trainer Sir Michael Stoute said, “We’re pleased with him. He’s a progressing horse that hopefully has a bright future. On the day, he found a more mature horse that was better than he was. But we’re proud of him.”

Right: Third place finisher Brilliant Speed returns after the race. Trainer Tom Albertrani said, “He did it so easy.  Coming into the stretch, I thought we were home. He was so sharp. I knew I had him razor sharp.  It was a good effort. We’ll definitely bring him back next year.  He’s maturing all the time.” 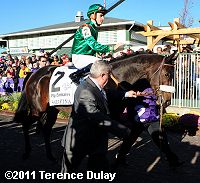 Fourth place finisher and beaten favorite Sarafina in the paddock before the race. Jockey Christophe Lemaire said, “The trip was a bit long for her on that kind of ground. Soft ground. It’s quite soft. I was in a spot where I could improve my position without any effort, but when I put her out, she couldn't quicken really, like she’s used to doing on good ground.”