Kicking off the championship races for the 2011 World Championships was the inaugural running of the $500,000 Breeders' Cup Juvenile Sprint, a 6 furlong test over the main track restricted to 2-year-olds. Secret Circle was sent off as the 2-5 favorite in the field of 9 off his wins in his debut and then the Jack Goodman at Santa Anita, over 9-1 Seeker, third in the Nashua (G2) last out, and 10-1 Trinniberg, second in both the Nashua (G2) and Hopeful (G1). 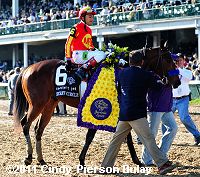 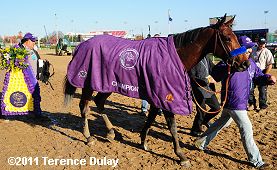 Right: Secret Circle heads to the winner's circle. Winning trainer Bob Baffert said, "After I saw those fractions, I thought, 'Oh boy,' but he was doing it easy. He's just a very gifted horse, he has unbelievable speed. I feel good about it because he came off the plane and won here. I was a little worried about him coming down the lane, he kind of lost focus, but he's just young."

Left: Secret Circle heads back to the barn. Winning jockey Rafael Bejarano added, "We were going fast, but he was relaxed to the outside. I waited until the stretch to let him go, and when I did, he showed me a big kick. He wasn't comfortable on the track. That's why he was lugging out a little (in the stretch) you know. I was a little concerned about how fast we were going (early), but I knew I had to be close today." 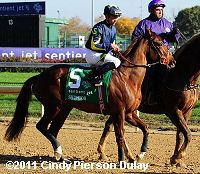 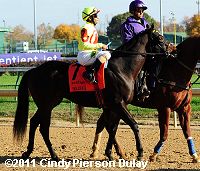 Left: Second place finisher Shumoos in the post parade. His jockey Garrett Gomez said, "She ran really good. She finished willingly. She sat in the gate bad and I wasn't sure if she would get away good. But she did get out in good shape and put herself in race. Coming down the lane, I thought I had a good chance to win."

Right: Third place finisher Holdin Bullets in the post parade. His jockey Jeffrey Sanchez said, "I had a good trip. No excuses. He hadn't run in a long time and this track is tiring today. He just got tired."