A field of 9 older horses went to post in the $1.5 million Sentient Jet Breeders' Cup Sprint (G1), a 6 furlong trip around one turn of the main track. Forego Stakes (G1) winner Jackson Bend was the 5-2 favorite, off his 2nd place finish in the Kelso Handicap (G2). In to challenge him included 7-2 second choice and defending champion Big Drama, winner of the Mr. Prospector (G3) and the Whippleton, and 5-1 third choice Euroears, 8th in the Vosburgh (G1) after winning the Bing Crosby (G1).

Euroears was gunned to the lead by jockey Rafael Bejarano soon after the start and got a fast opening quarter of 21.12 before 7-1 Force Freeze passed him and opened a 1 1/2 length advantage through a half in 44.41. Force Freeze led through the lane but 8-1 Amazombie, 5th early, closed late and outfinished Force Freeze through the final 1/16 to win by a neck in 1:09.17 over the fast track. It was another 2 1/4 lengths back to Jackson Bend third. 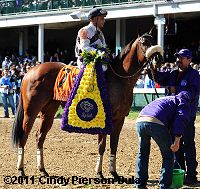 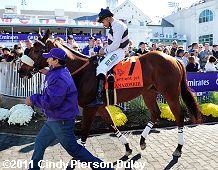 Left: Amazombie heads to the winner's circle. Jockey Mike Smith said, "I had a lot of horse.  My main concern is at the point where I cut the corner.  When he hits the front too soon, he tends to really wait.  So I was trying not to hit it too soon but yet not let him idle at the same time. It worked out.  He actually did hit the front a bit too soon.  You'll watch it in the replay.  Just keep after it a little bit.  Luckily, the wire was coming up.  Once the horse got up to the neck, he dug back in.  I felt comfortable he wasn't going to pass me."

Right: Amazombie in the paddock. Trainer Bill Spawr said, “I feel very fortunate and very lucky. After he won the Ancient Title (at Santa Anita), we decided to send him here. That’s a ‘Win and You’re In’ race, and if it weren’t for the Ancient Title, we wouldn’t be here.   They say it pays to own Cal bred.  There's evidence there. I feel I was due.  We tried several times, and I don't think I've had a horse to run in these races under the same circumstances." 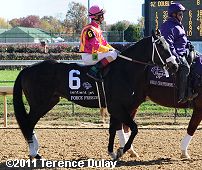 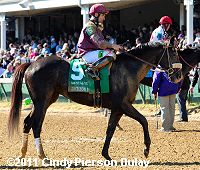 Left: Second place finisher Force Freeze in the post parade. Jockey John Velazquez said, “He made the lead so easy; I had a hold and he still went to the front. But I may have let him do too much too soon. I should have held him back. I heard (Amazombie) coming at the 3/16 and I got after my guy. But he just didn’t have enough left. He ran great; I wish I would have waited just a little longer.”

Right: Third place finisher and beaten favorite Jackson Bend returns after the race. Jockey Corey Nakatani said, "He's such a nice horse with a big heart. He deserves to be champion sprinter. The track is a little faster. The horses that were one-two stayed one-two. (Jackson Bend) is the only one who made up any ground. Our trip couldn't have been any better. We lost a little bit of ground, but I put him where I thought was the best part of the racetrack. He ran really big. I think running against Uncle Mo (Kelso at Belmont Park) last time might have taken a little starch out of him. He seemed to have a little more energy last time.”