A field of just 9 older horses went to post in the $1 million Breeders' Cup Dirt Mile (G1), a 1 mile trip around one turn of the main track at Churchill Downs. Indiana Derby (G2) winner Wilburn was sent off as the 5-2 favorite over 3-1 Trappe Shot, 4th in the Vosburgh (G1) last out, and 11-2 third choice Shackleford, off a second place finish in the Indiana Derby. 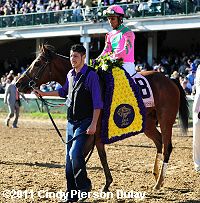 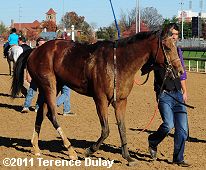 Left: Caleb's Posse heads to the winner's circle. Owver Everett Dobson said, "This horse showed a lot of talent early on.  You know, he's not the most physically imposing horse, but he always had that attitude that looked like he had some athleticism.  Certainly, when he was raised on our farm in Lexington, and when we saw him growing up, he just like he had the it factor.  Sure enough, that's what dreams are made of. I've had at least one horse with Donnie and many years several horses, for better than 12 years and have a lot of respect for how he trains and couldn't be more pleased with how he treats the horses and how he gets them ready."

Right: Caleb's Posse heads back to the barn after the race. Trainer Donnie Von Hemel said, “You could see coming down the stretch that he had dead aim on the leader. The last 1/16 mile, we just got to celebrate. I think we got enough pace in the race, and he was just rolling down the lane. I was hoping for 45 and change, so I think that was key. It’s the biggest (victory of my career), no doubt; a million dollar race on Breeders’ Cup day." 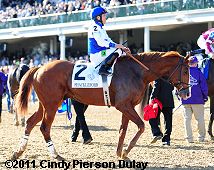 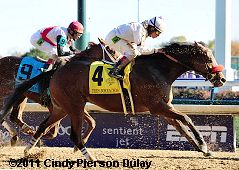 Left: Second place finisher Shackleford returns after the race. Trainer Dale Romans said, “It was just like the Derby; I thought we had it won. It was tough for speed horses today. I’m not going to make any excuses. Caleb’s Posse ran big, and we ran big. There was a lot of pace up front and quality horses running fast. I was proud of him. I thought he ran super. He’s had a great year. He’s going to get a break now. He couldn’t have done anything more for us all year.”

Right: Third place finisher Tres Borrachos crosses the finish line. Jockey Jesus Castanon said, “I had a good trip and was able to sit off the leader (The Factor). When he gets next to a horse, he will fight them. I thought he ran a winning race. We opened up, but the winner, he just blew past me.” 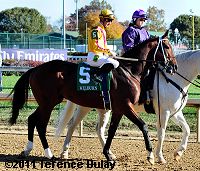 Seventh place finisher and beaten favorite Wilburn in the post parade. The Steve Asmussen trainee raced in 6th early just 4 lengths off the pace, but gave way at the 1/4 pole to finish 7th beaten 11 1/2 lengths. His record is 5 wins, 0 seconds, and 0 thirds in 9 starts, earning $586,515 for owner Stonestreet Stables (Barbara Banke).