A field of 12 older fillies and mares went to post in the $1 million Sentient Jet Breeders' Cup Filly and Mare Sprint (G1), a 7 furlong trip around one turn of the main track. Test Stakes (G1) winner Turbulent Descent was sent off as the 7-5 favorite over 3-1 Switch, a close third in the Thoroughbred Club of America Stakes (G1) at Keeneland, and 7-1 Pomeroys Pistol, winner of the Gallant Bloom (G2) at Belmont.

15-1 Golden Mystery led the field out of the chute and down the backstretch through fractions of 22.40 and 45.71 while stalked by 20-1 Musical Romance and 33-1 Tamarind Hall. On the turn, Golden Mystery tired allowing Turbulent Descent to lead to the 1/8 pole. The favorite also tired as Musical Romance came back to win by 1 1/4 length over Switch in 1:23.47 over the good main track. It was a head back to 28-1 Her Smile third. 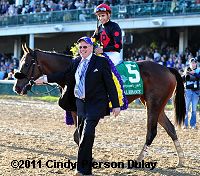 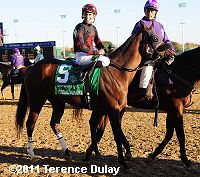 Left: Musical Romance heads to the winner's circle. Winning trainer Bill Kaplan said, "I don't care if she runs 13 or 14 times a year, she gets better with every shot. I was confident she'd run good, but I didn't know she would beat these horses. She has such speed and she can place herself wherever she wants to. And when Juan wants her to go, she just goes."

Right: Musical Romance in the post parade. Jockey Juan Leyva said, "I just need to let her do whatever she wants to do in the beginning, and down the lane I need to get into her a little bit, but I always try to save enough with her for the end. She broke really alert like she always does. I got her to settle and when she did that, I knew I still had plenty of horse. I saw Turbulent Decent and Pomeroys Pistol move and I thought they moved a little early, but I like to hold on to my horse as long as I can because she has a short run." 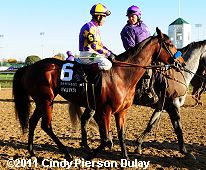 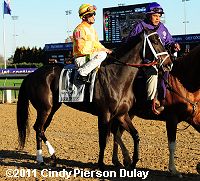 Left: Second place finisher Switch in the post parade. Her jockey Joel Rosario said, "There were a lot of things going on early in that race. I waited with her because they were all together in a group and there was trouble. On the turn when I made my move, two horses in front of me started to back up. I had to pull her up. It probably cost me the race. She was really running when I had to grab her."

Right: Third place finisher Her Smile in the post parade. Her jovkey John Velazquez said, "Right near the wire, there was a little puddle of water, and the sun was hitting it, so it was kind of bright, and she went to jump it, and I was like, oh my God. I just got beat for second. They harrowed the track. It's deeper. It's changing from race to race, and it's going to change all day. Some parts are really fast, and some parts are still a little wet. The trick is to find the right path." 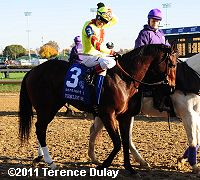 Fifth place finisher and beaten favorite Turbulent Descent in the post parade. Her trainer Mike Puype said, "She got slammed leaving the gate. She got slammed leaving the backside. Then it made her eager and she pulled her way right up to the leader – moved too early and then she flattened out after all that. She couldn't sustain a good run. She just didn't have a good trip at all. It's her first bad race. (This is) the wrong day to have it, but it happens and we've just got to move on."