There were 9 races on Day 2 of the 2011 Breeders' Cup World Championships. Of these, one of the more highly anticipated was the $2 million TVG Breeders' Cup Mile (G1) for older horses going 1 mile on the turf. 6-year-old mare Goldikova was back looking to be the first 4-time Breeders' Cup winner, and was sent off as the 6-5 favorite, exiting her runner-up effort in the Prix de la Foret (G1). In to challenge her in the field of 13 included 11-2 Gio Ponti off his Shadwell Turf Mile (G1) win, and 7-1 Strong Suit, winner of the Lennox (G2) and Challenge Stakes (G2).

Patrick Valenzuela aboard last place finisher Courageous Cat claimed foul against Olivier Peslier aboard Goldikova but the claim was disallowed by the stewards. 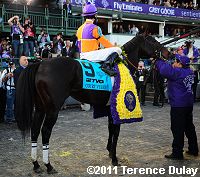 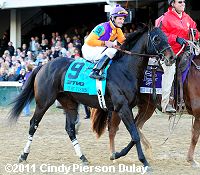 Left: Court Vision in the winner's circle. Owner B. Wayne Hughes said, "I guess Dale Romans is the difference.  It's crystal clear in my mind.  We expected to run well.  Robby had worked him and said he worked better than maybe for quite some time.  But we didn't expect to win.  I didn't expect to be sitting here. And so probably I don't really have anything to contribute other than the fact that Dale took the horse at our request, and sometimes a good change is good for the horse.  I think this is the case. We had the best jockey in the world on him.  So all we did was just buy him.  Okay.  So thank you."

Right: Court Vision returns after the race. Jockey Robby Albarado said, "Not only was I on Court Vision, but I had a whole field vision.  So I got to see everyone in the race and where they were. Last year when I run against Goldikova, I tried to follow her around there and made the move a little earlier than I needed to with him, and I think that compromised him in the race.  This year I tried to let him run his own race like he would. Dale said just let him finish his way.  So he was way out and running late, but he did.  He was a little more out than I wanted him to be, but I didn't want to get him stopped and let him get the momentum worked out." 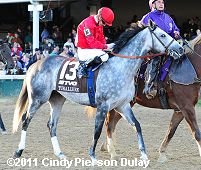 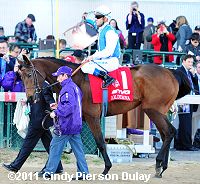 Left: Second place finisher Turallure in the post parade. Jockey Julien Leparoux said, “Tough. I thought I won. It was a good trip. From the 13-post I knew just to take back and make one run. He likes to run like that anyway. I did have to just ease back and that’s what I did. After the race, I thought for sure that I won. It’s disappointing. He couldn’t do much more.” Trainer Charles Lopresti added, “He ran a great race. It’s a heartbreaker to get beat. It could have been the other way around and we could have won by a whisker."

Right: Third place finisher and beaten favorite Goldikova in the post parade. Jockey Olivier Peslier said, “She ran well. She always runs well. I’m fine with her race. No regrets. When we came on the turn there was no place to go. But she got through with good acceleration. I heard (Patrick Valenzeula on Courageous Cat) yell, but I was already past. She’s been a wonderful mare to ride. I am very lucky. Right now (knowing it is her last race) I am full of emotion. I hope she does well and that someday I will ride her baby.”