The first Championship race on Saturday was the $500,000 Breeders' Cup Marathon (G2), a 1 3/4 mile test around 3 turns of the Churchill Downs oval. A.U. Miner, who was placed third in last year's edition, is back qas the 3-1 favorite in the field of 11, off a win in the Greenwood Cup followed by a 5th place effort in the Jockey Club Gold Cup (G1). In to challenge him included 9-2 second choice Cease, third in the Hawthorne Gold Cup (G2) last out, and 5-1 third choice Birdrun, winner of the Brooklyn (G2) but 6th in the Jockey Club Gold Cup (G1). 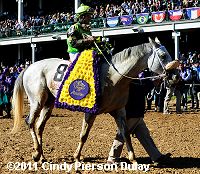 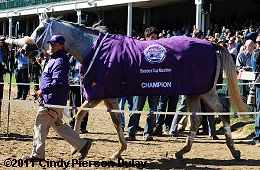 Left: Afleet Again heads to the winner's circle. Owner Bob Krangel said, "He's been very happy.  He's gone through some times where he was a little more sulky.  That's kind of his personality.  We tried him in Saratoga, and that grass up there.  I think the grass may have been a mistake even though he is kind of grass bred.  While those races didn't hurt him any, I think it got him a little confused and put him off his game. I can't remember who won the race at Belmont.  We took the blinkers off of him, and he tried to run up the horse's heels and tried to bolt.  He likes to be in his little rut. Now he's in a situation where he made three straight dirt races.  He got his rhythm back, and he got his mojo back, I guess."

Right: Afleet Again heads back to the barn. Jockey Cornelio Velasquez said, “I rode this horse in the Travers (4th in 2010), and he has one pace all the way. I stayed behind the speed, and at the 1/4 pole, put him in the clear. And I had a lot of horse. I like this horse. He needs a strong ride. In the last 5/16 I had a lot of horse. (Joel Rosario on Pleasant Prince) sent his horse at the quarter pole. At the 3/8 I pulled the trigger." 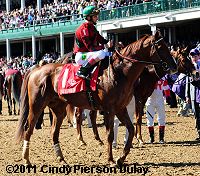 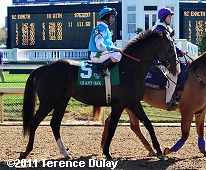 Left: Second place finisher Birdrun returns after the race. Jockey John Velazquez said, “I knew we were going kind of fast early and I tried to get him back, but he wanted to go. I finally got a hold of him and was able to get him to settle. Then, when that horse (leader Pleasant Prince) took off once more, he wanted to go again. I didn’t think I’d have enough (horse), but he kept going, and at the five-sixteenths (pole) I thought I could win the whole thing. He just kept going. He ran a really good race.”

Right: Third place finisher Giant Oak in the post parade. Trainer Chris Block said, “I thought he got a good trip. (Jockey) Shaun (Bridgmohan) did a good job getting him settled in there. He was a little keener than you’d want going 1 3/4, but that’s going to happen with a horse coming off a 1 1/4 and 1 1/8 race. Shaun did a real good job getting him settled. We took our shot at the head of the stretch. The horse ran hard, he just ran out of gas the last sixteenth.” 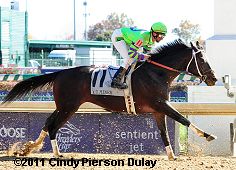 Favorite A.U. Miner, who did not finish the race, passes by the stands the first time in last place. Dr. Wayne McIlwraith, on-call veterinarian for the AAEP said, "The clinical diagnosis was fractured sesamoid in the right front fetlock. The horse stayed in the ambulance and being transported to Lexington to the equine hospital.  Tentatively surgery will be performed on Monday or Tuesday. You do the surgery to save their life.  There can be a number of complications.  It will be done by Dr. Larry Bramlage, who developed the technique fetlock arthrodesis for it.  It's hard to give a diagnosis, but generally 60 percent to 70 percent of them do well."