The $2 million Grey Goose Breeders' Cup Juvenile (G1) features 2-year-old colts and geldings going 1 1/16 miles on the main track, and often decides the early favorite for the next Kentucky Derby, especially when run at Churchill Downs. Saratoga Special (G2) and Champagne (G1) winner Union Rags was sent off as the 11-10 favorite in the field of 13 over 6-1 Creative Cause and 7-1 Hansen.

Jockey Ramon Dominguez sent Hansen to the lead immediately and he set fractions of 23.26, 47.39, and 1:12.24 while 42-1 Speightscity stalked him 1 1/2 lengths behind. Entering the stretch, Union Rags, 6th early, closed on the pacesetter but Hansen dug in late to hold him off by a head in 1:44.44. It was another length back to Creative Cause third. 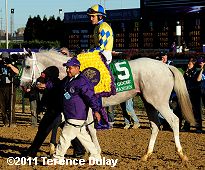 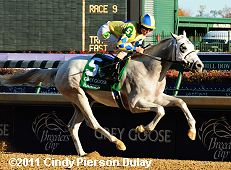 Left: Hansen heads to the winner's circle. Winning trainer Mike Maker said, "He’s a natural. Obviously his performance speaks for itself. That’s the way he wants to run and we weren’t going to change a thing. It’s just that natural ability. Obviously he’s got a lot of speed and he’s always shown it. He’s also got a lot of fight; a bunch of good characteristics. We pointed to the Breeders’ Cup before he ever ran. I only told that to the owners, and they’re as crazy as I am."

Right: Hansen leads first time by. Jockey Ramon Dominguez said, "He ran superb for me. Going into the first turn, he was a little aggressive. That made me a little concerned. When we got to the backside, he switched to his right (lead) and he came back to me and relaxed beautiful. I got pressed pretty early, around the 3/8 pole, but he continued coming for me. I'm very pleased. He’s special." 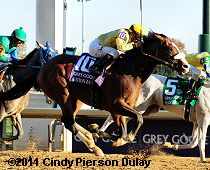 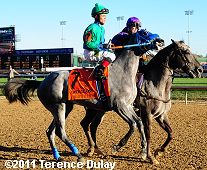 Left: Second place finisher and beaten favorite Union Rags at the finish. Trainer Michael Matz said, “They were wide on the first turn; they were wide on the second turn. He (Javier Castellano) said the other horse had it his own way, and he (Union Rags) galloped out good and strong. He said, ‘one more jump and we would have had him.’ I didn’t get a good draw. I guess that’s racing. What are you going to do? It’s one of those things. I wish I had an answer for you. It’s disappointing, that’s for sure, but I guess that’s horseracing.”

Right: Third place finisher Creative Cause acts up in the post parade. Jockey Joel Rosario said, “We had a nice trip. We were moving about the same time as Union Rags and I was trying to leave enough, but the winner (Hansen) was just a little bit better. He got a little aggressive in the post parade from all the noise and the people and I think it might have cost us a little bit in the end.”