A full field of 14 two-year-olds contested the $1 million Breeders' Cup Juvenile Turf (G1), a 1 mile test around 2 turns of the Matt Winn Turf Course. Finale was sent off as the 4-1 favorite off his wins in the Continental Mile at Monmouth and the Summer Stakes (G3) at Woodbine. In to challenge him included 11-2 second choice Caspar Netscher, fifth in the Middle Park (G1) arfter winning the Mill Reef (G2), and 13-2 third choice Majestic City, second in both the Del Mar Futurity (G1) and Breeders' Futurity (G1). 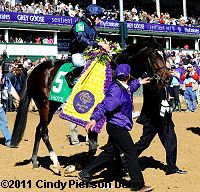 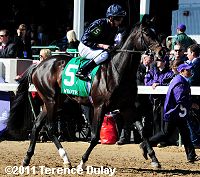 Right: Wrote heads to the winner's circle. Trainer Aidan O'Brien said, "I think he just got beat first time, then he won his maiden second time, and then he won a race in Galway the next time.  We always liked him after that.  He went to Newmarket for his first run in the group race and just got a little bit unbalanced coming down the hill the first time.  It can happen sometimes in Newmarket. After that, he had a little bit of a temperature for a while, so he had to have a break.  This was his first one back.  He'd been working very well, and Joe's been really happy with him in his work."

Left: Wrote in the post parade. Jockey Ryan Moore said, "I had a nice trip; good position all the way. When I got to the outside, he picked it up really well in the stretch .It was a very easy run round.  It went smoothly.  Ground felt good.  He moved well and the horse quickened up very well. " 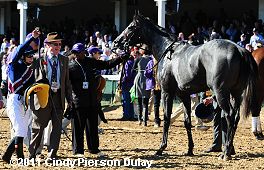 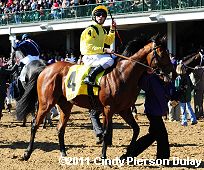 Left: Second place finisher Excaper after the race with jockey Emma-Jayne Wilson and trainer Ian Black. Wilson said, “The race set up just the way we planned. Sometimes, it does not do that, but today it did. He is a raw talent and been a good pupil, and learned his lessons well. (Trainer) Ian (Black) had been down here all week and he said the turf was a little softer down on the inside, so I kept him off the rail. He ran great and only one horse beat us.”

Right: Third place finisher Farraaj returns after the race. Jockey Neil Callan said, “It was a good race. I got a good pitch from the gate, traveled just off the speed. Just when I went for my split into the straight the second horse (Excaper) leaned on me a little.  Ultimately he galloped out well to the line. He’s a lengthening sort of horse. That’s why I committed him at the top of the stretch. He ran very creditably. I was proud of him.” 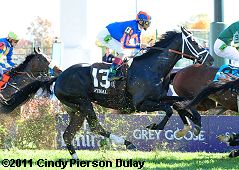 Seventh place finisher and beaten favorite Finale toward the back of the pack as they pass by the first time. Jockey John Velazquez said, “The post (12) kind of hurt him. I tried to find a place to tuck in going to the first turn, but it was too crowded and he wanted to run. We were 5 wide into the turn and we probably lost the race right there.”