The shortest race of the Breeders' Cup Championships is the $1 million Breeders' Cup Turf Sprint (G2) featuring older horses sprinting 5 furlongs on the turf. Nearctic Stakes (G1) winner Regally Ready was sent off as the 2-1 favorite in the field of 14 over 6-1 Caracortado, winner of the Del Mar Mile (G2) and 7-1 Havelock, winner of the Woodford (G3).

32-1 Rapport battled for the lead with Regally Ready down the backstretch and around the turn through an opening quarter of 22.45. Regally Ready shook him off at the top of the lane, getting the half in 44.81, and drew off late to win by 1 1/2 lengths over 33-1 Country Day in 56.48 over the good turf. It was another 3/4 length back to 11-1 Perfect Officer third. 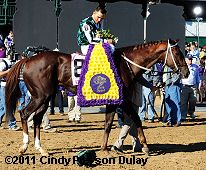 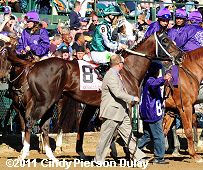 Left: Corey Nakatani drops his helmet as Regally Ready heads to the winner's circle. Nakatani said, “The Asmussen team did a great job with this horse and that race at Woodbine (the Nearctic) set him up perfectly for this race. We got away in good shape and had a perfect trip. He was composed and focused. When he started pulling away down the stretch it just showed how good a horse he is.”

Right: Regally Ready in the post parade. Owner Tom Ludt said, " We wanted to get through today.  He is very sound.  We were hope to go win the Breeders' Cup, and now we can say we did.  We have great plans to travel the world with this horse.  We hope he takes us to many great places with victories. We might have a really good plan to finish at Santa Anita next year.  He loves that course." 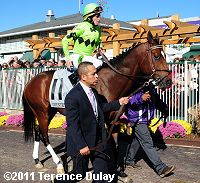 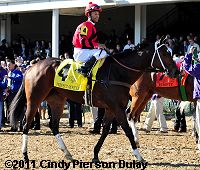 Left: Second place finisher Country Day heads out of the paddock before the race. Jockey James Graham said, “He ran great, great position and finished well. I just couldn’t catch the winner. If you look at the replay you’ll say the same thing. I thought when we straightened up that he had a big shot. (Regally Ready) was getting away from us a little bit, but that was it. He ran the best race he could ever run. I don’t ever give up, and he never did.”

Right: Third place finisher Perfect Officer returns after the race. Trainer Michael Pino said, “We were wanting to be a little closer.  He kind of got out of the race a little bit, but he showed courage and ran a good race.  I’m proud of the horse.  We’ve come a long way and wanted to win, but I’m happy with the effort.”