The first of two grass events on Friday was the $1 million Breeders' Cup Juvenile Fillies Turf (G2), for 2-year-old fillies going 1 mile on the Matt Winn turf course. Elusive Kate was sent off as the 5-2 favorite in the field of 14, off her wins in the Prix du Calvados-Haras des Capucines (G3) at Deauville and the Prix Marcel Boussac (G1) at Longchamp. In to challenge her included 4-1 second choice Somali Lemonade, winner of the Jessamine Stakes (G3) at Keeneland, and 6-1 third choice Stephanie's Kitten, off her win in the Alcibiades (G1), also at Keeneland. 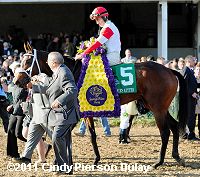 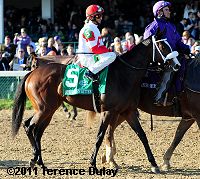 Left: Stephanie's Kitten heads to the winner's circle. Winning trainer Wayne Catalano said, "I'm so happy for Mr. Ramsey. He loves the game. And winning is the thing for him, it's not even for the money. I got a little nervous late, so I want to go and watch the replay. She ran her heart out."

Right: Stephanie's Kitten in the post parade. Winning jockey John Velazquez said, "She was amazing. As soon as I asked her to go in between those other two horses, she responded right away. It's nice when you can ride horses like that. It makes it easy for us. She's game for anything I ask her to do. That's what I like about her." 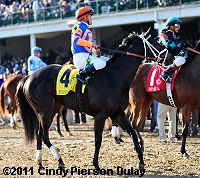 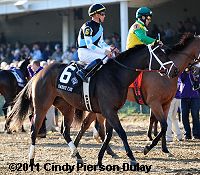 Left: Second place finisher Stopshoppingmaria returns after the race. Her jockey Javier Castellano said, "She ran very good. She gave me a great performance. I'm so happy the way she did it. I thought I was (home). At one point she took off, and she gave me everything she had. The other horse (Stephanie's Kitten) finished strong; we just got beat. My filly handled the course so well. It was tough."

Right: Third place finisher Sweet Cat returns after the race. Her jockey Garrett Gomez said, "The race was won or lost for us turning for home. I just couldn't quite quicken with the other two fillies. I hit a little flat spot. It's a little soft out there. She handled the ground real well the entire way around, but I hit that spot, and then the last 150 yards, she just couldn't keep pace. Down towards the wire she was still there and staying on well." 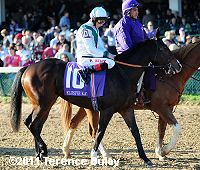 Eighth place finisher and beaten favorite Elusive Kate in the post parade. Her trainer John Gosden said, "The draw killed her (post 10). She was wide at the first turn and the slow pace didn't help her. Maybe she should have gone on and made the running." Her jockey William Buick added, "The draw was not good for her (post 10). She had trouble handling the ground. It was very loose, and she was skidding all over the place."