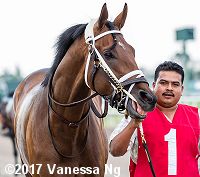 Florida Derby (G1) runner-up State of Honor breezed a half-mile in :49.80 over a fast track on Easter Sunday at Churchill Downs in preparation for a start in the $2 million Kentucky Derby Presented by Yum! Brands (G1) on Saturday, May 6. The Ontario-bred son of To Honor and Serve, trained by Mark Casse, was put through eighth-mile splits of :12 and :24.40 by exercise E.J. Bowler and galloped out five furlongs past the wire in 1:02.

"We really just wanted to get a solid maintenance-work in him before something more serious next week," assistant trainer Norm Casse said. "State of Honor is a tremendous work horse so we will probably keep breezing him by himself."

Throughout his six-race 2-year-old season, State of Honor trained and raced exclusively over Woodbine's synthetic Tapeta surface with the exception of one turf race. But his future engagements changed after Casse breezed the colt on dirt at Palm Meadows in South Florida this winter. "Horses that are primarily based on the synthetic track need time to acclimate to the dirt surface," Norm Casse said. "We really thought State of Honor was a true dirt horse after his first breeze at Palm Meadows. We have been treating every race in his 3-year-old campaign as a steppingstone to the first Saturday in May, and he has improved in each start." 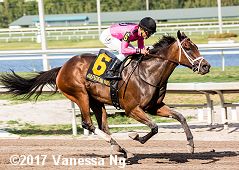 Salty, a top contender for the $1 million Longines Kentucky Oaks (G1) after winning the Gulfstream Park Oaks (G2), breezed a half-mile in :48 Sunday in preparation for the Friday, May 5 race. The 3-year-old daughter of Quality Road went to the track at 6 a.m. with exercise rider Janelle Castonguay and breezed in company with multiple graded stakes-placed mare Mississippi Delta (:48) through fractions of :12.20 and :24.40 before galloping out five furlongs in 1:01.

"We have always been very high on Salty," assistant trainer Norm Casse said. "She's extremely talented and could not have gone better over the Churchill surface. We knew she liked the surface as a 2-year-old but it gives you confidence to see her enjoying it even more as we prep for the Oaks." Salty is 3-2-1-0 lifetime with earnings of $180,370. 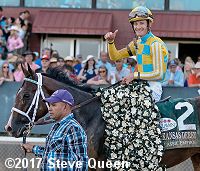 Blue Grass winner Irap is scheduled to breeze the next two Fridays at Keeneland before arriving at Churchill Downs.