Kicking off the World Championships, the $1 million Breeders' Cup Juvenile Turf Sprint (G1) featured a full field of 12 two-year-olds going 5 1/2 furlongs around one turn of the turf. Bolton Landing Stakes winner and Queen Mary (G2) fourth place finisher Love Reigns was sent off as the 3-1 favorite. In to challenge her included 5-1 second choice Speed Boat Beach, winner of the Speakeasy Stakes at Santa Anita, and 11-2 third choice Persian Force, third in the Middle Park (G1) after just missing in the Prix Morny (G1).

Jockey Kylee Jordan hustled 12-1 Tyler's Tribe to the lead down the backstretch through an opening quarter of 21.65 pressed by Speed Boat Beach and stalked by 52-1 American Apple. On the far turn American Apple gained the lead through a half in 45.11. 13-1 Dramatised, 9th early, came through on the inside to gain a short lead through 5f in 56.67 but 7-1 Mischief Magic, last early under William Buick, rallied on the outside to win by a length in 1:02.41. It was a neck back to 10-1 Private Creed third, while favorite Love Reigns failed to rally finishing 8th beaten 9 1/4 lengths. Tyler's Tribe was eased in the stretch by Jordan and vanned off having bled during the race. 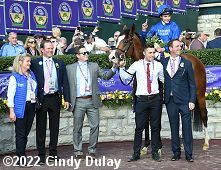 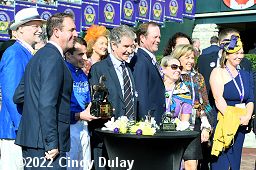 Left: Mischief Magic in the winner's circle. Winning trainer Charlie Appleby said, "Going over to Middle Park it was in our minds it was going to be a stepping stone on to this race. And we were very pleased with what we saw in Middle Park. He was pitching it with some of the best sprinters around in the UK. Coming into today, you know, William sort of read the race in the pilot that they were going to go hard. Obviously the plan was to try and potentially run a bit closer. But going back quick early doors, that William was happy to let his horse find his legs. And as William quite rightly said earlier, once you get him on the turn on the rail, you can ride the rail. It just makes life a bit easier."

Right: The trophy presentation for the Juvenile Turf Sprint. Hugh Anderson representing owner-breeder Godolphin said, Thank you very much. I've got the champion jockey on my right-hand side and the champion trainer on my left-hand side. And Godolphin is so fortunate to have people of this caliber. But you're right, this is a home bred which makes it a really special win for us. And the season has been exceptionally good in the UK, Europe, America, Australia. We're having a wonderful year. These two have played a huge part in it. We're all very, very proud. And I'm sure back in Dubai this has been watched with enormous satisfaction and enormous pride by our principal." 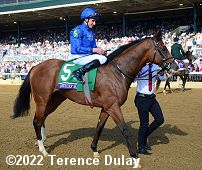 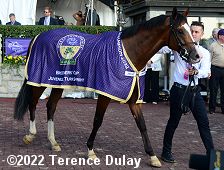 Left: Mischief Magic in the post parade. Winning jockey William Buick said, "He's a closer in the UK. So we expected him to come from off the pace, and we expected it to be pace on in the race. Lucky he just got a little bit of lost and took him a bit to get into things the first furlong, furlong and a half. Once I switched him in around the turn he was traveling nice, and I was following Dramatised. And it sort of opened up just as we turned into the straight on the inside. And I had to switch out and just pick my run. But he was always full of running. And it was really only a matter of getting the split and for him to finish it off."

Right: Mischief Magic heads back to the barn after the race. Buick added, "t was a great performance. And I think coming off the turn today really, really set him alive. It really woke him up. When he switched leads, he just flew. It's always easier when you're on the rail. You just ride the bend a little bit better. But he's a very straightforward horse and he's raced a few times. But once he got in there, he was very tough." 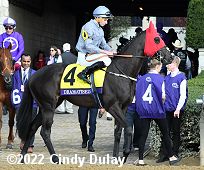 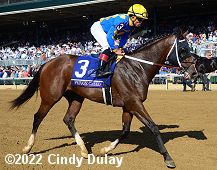 Left: Second place finisher Dramatised heads out for the post parade. Trainer Karl Burke said, “She ran a fantastic race.  We couldn’t have asked for anything more, really. She’s just a little bit slow for gate speed, which we were always a little bit concerned with, but Ryan (Moore) gave her a beautiful ride and was committed to go down the rail once we were slow away. Maybe we were a bit lucky to get the gaps in the straight. We thought we had it won a half-furlong out. Fair play – Charlie’s horse is a very good horse. She’s probably a stiff five-furlong horse.”

Right: Third place finisher Private Creed returns after the race. Trainer Steve Asmussen said, “He ran hard. It’s a very unique race with so many horses coming from so many different angles and how do they take it. But, he ran hard. He’s a very nice horse.” Jockey Joel Rosario added, “He ran really well. He ran his race, but he just couldn’t hold on. He broke fine, but he just took a little bit of time to find his stride.” 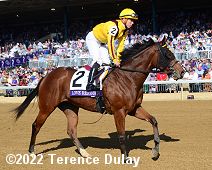