The 2022 Breeders' Cup World Championships ended on Saturday with nine races, all with year-end championship implications, four of which were conducted over Keeneland's 7 1/2 furlong Haggin Turf Course in the infield. Unlike Friday the skies were mostly cloudy, temperatures in the mid 70's, with 40 MPH wind gusts giving competitors a stiff tailwind down the stretch, with the going firm.

Ryan Moore won the 20th Bill Shoemaker Award off three wins (Filly & Mare Turf, Juvenile Turf, and Juvenile Fillies Turf) and three seconds (Turf, Turf Sprint, and Juvenile Turf Sprint) The Award goes to the jockey who won the most races in the 14 World Championship races this weekend with the tiebreaker being a 10-3-1 point system for second- through fourth-place finishes. This was his second Shoemaker Award (after winning in 2015 also at Keeneland), breaking Irad Ortiz Jr.'s streak at 4 wins in a row. 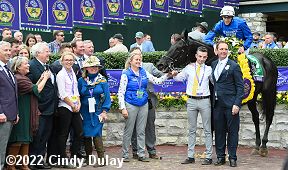 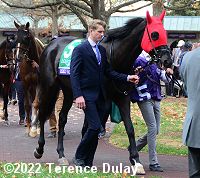 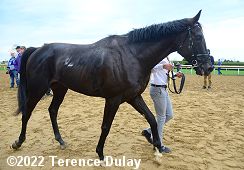 Left: Rebel's Romance in the paddock. Winning jockey James Doyle said, "It was a tremendous performance. Being back on fast ground suited him. He can be a quirky horse in the preliminaries, but he was good today. He was very relaxed and having the pony helped. The guys who look after him obviously, Charlie but also Rob Fitzpatrick who rides him out every day have once again done a great job. It's a great result to have a winner here as obviously my sister Sophie has been based out here as a jockey for a while now and I've let her down before at this meeting but I hope she's proud."

Right: Rebel's Romance heads back to the barn. Winning trainer Charlie Appleby said, "I am delighted to finish the meeting off with a winner. From the whole team's point of view, it's great to have James get first Breeders' Cup win and I'm delighted for him. Over the moon for him. It's been a great meeting. The horse has turned himself around, to be fair. You may think it was the switch to the turf, but I watched him train on the dirt here and I almost wished I was running him on the dirt here. Physically, you can just see that time has helped him."

Jockey John Velazquez sent 29-1 Smooth Like Strait to the lead first time by through fractions of 23.00, 46.81, and 1:10.96 while pressed by 36-1 Pogo and stalked by 54-1 Beyond Brilliant. Entering the stretch Smooth Like Strait tired allowing Pogo to briefly inherit the front through 7f in 1:22.56 before also weakening. Modern Games, 8th early under William Buick, closed with a rush down the center of the course to win by 3/4 length over 56-1 Shirl's Speight in 1:33.96. It was a nose back to late-running Kinross third. 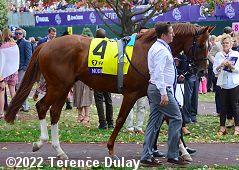 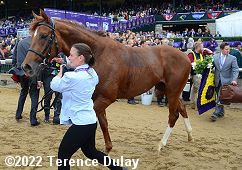 Left: Modern Games in the paddock. Winning jockey William Buick said, "He was really professional last year too (when he won the Juvenile Turf). Today, he was foot perfect. He just came out of the gate a little slow. He missed the break but I was happy where we were. Once I got him running, he stayed true. He loves this ground. I stayed off the rail. I thought he was the best horse in the race. I didn't want to take too many chances."

Right: Modern Games heads back to the barn. Winning trainer Charlie Appleby said, "A great result and another serious ride from Will. He's been a fantastic horse to travel. Later in the season we rolled the dice at Champions Day on soft ground and he probably got me over the line to win me the U.K. trainer's championship when he was second as in the UK it's done on prize money. Next year, the Queen Anne is the obvious target. He's getting a fanfare around world and it was great to see him applauded this year not like last year which was no fault of his own. We'll look to bring him back here next year. From this July onward he really changed physically and got stronger in all the right places. I thought he looked a picture in the paddock today and I was always quite confident when I saw him look that well."


The $2 million Maker's Mark Breeders' Cup Filly and Mare Turf (G1) featured a field of 12 older fillies and mares going 1 3/16 miles on the turf. Prix de l'Opera (G1) runner-up Nashwa was sent off as the 5-2 favorite over 3-1 second choice In Italian, winner of the First Lady (G1), and 4-1 third choice Tuesday, 6th in the Prix de l'Opera. 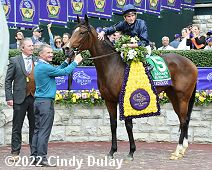 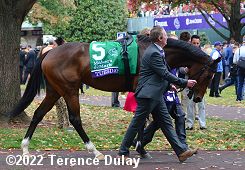 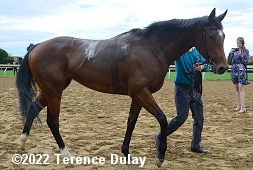 Left: Tuesday in the paddock. Winning jockey Ryan Moore said, "The race was very straight forward. Pace was strong and even. She was in a good rhythm. I was always confident and finished up very well. Aidan had her in an unbelievable place today. The horse has been magnificent and has been most of year. She has bounced back."

Right: Tuesday heads back to the barn. Winning trainer Aidan O'Brien said, "She's a filly that won the (Epsom) Oaks when she was barely 3 and we were conscious of that and we let her dally through the rest of the year. We had our eye on this race for her. She's an amazing filly from an unbelievable pedigree as well. Totally 100 percent homebred which makes this incredible and a privilege for us. Ryan (Moore) gave her a stunning ride." 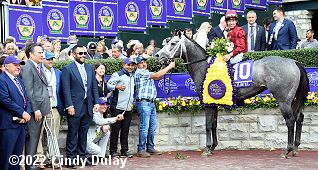 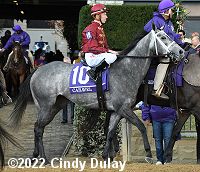 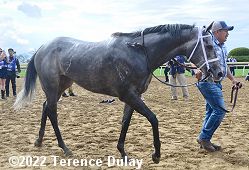 Left: Caravel heads out for the post parade. Winning jockey Tyler Gaffalione said, "I feel amazing. She broke alertly. No one really went, so I decided to take control of things. Coming into the stretch, she just kept finding more. She's a very solid filly. She shows up every time. She's trained by one of the best in the country, Brad Cox. He brings them over ready to fire."

Right: Caravel heads back to the barn. Winning trainer Brad Cox said, "She was running back in 20 days, but had a race over the course. She was doing extremely, extremely well. She's filly that has had a hard time keeping on weight and since the end of the summer, she's really blossomed. We decided to take a swing and it worked out." 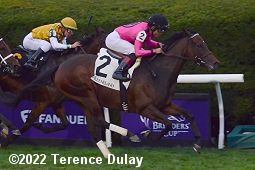 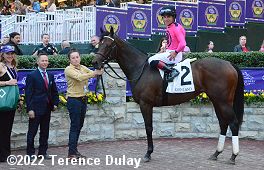 The final race at Keeneland for 2022 was the $350,000 Fall Harvest Stakes presented by Mint Gaming Hall for older fillies and mares going 1 mile on the turf. Jockey Florent Geroux sent 5-1 fourth choice Burning Ambition to the lead first time by through fractions of 23.84, 47.85, and 1:11.91 while pressed by 7-2 second choice Dalika and stalked by 10-1 Stolen Holiday. Burning Ambition continued to lead through 7f in 1:23.54 but 4-1 third choice Wakanaka, last early, came out 6 wide under Joel Rosario and wore down 23-1 longest shot Henrietta Topham to win by 3/4 length in 1:35.37. It was another 1/2 length back to Burning Ambition third, while even-money favorite Shantisara failed to rally and checked in fifth beaten 4 1/4 lengths.

Winning owner Barry Irwin of Team Valor said, "We were hoping there would be more speed to materialize and it didn't really happen except for the first quarter. And when I saw her way back there, I didn't know how the hell she was gonna get up to tell you the truth. I was surprised. I own her with Gary Barber. We are both commercial. Everything we buy, we want to race and sell. I've changed my modus operandi. I'm a bid-ness-man... So we're hoping to make a profit." She is entered as Hip 237 at the November Breeding Stock Sale at Keeneland on Monday, consigned by Bluewater Sales.