Kicking off Championship Saturday, the $1 million Breeders' Cup Filly and Mare Sprint (G1) featured a field of 12 older fillies and mares (after Hot Peppers scratched) sprinting 7 furlongs on the main track. Ballerina Handicap (G1) winner Goodnight Olive was sent off as the 9-5 favorite over 7-2 second choice Echo Zulu, winner of the Dogwood (G3), and 6-1 third choice Obligatory, third in the Ballerina Handicap. 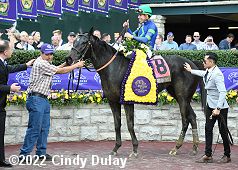 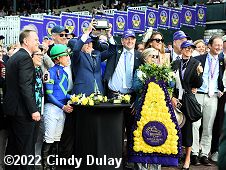 Left: Goodnight Olive in the winner's circle. Winning trainer Chad Brown said, "We had a plan in the paddock to, she normally breaks pretty well in her races and obviously Irad knows her really well to give her a nice run-up. Looks like there was plenty of speed signed on, even with the one scratch. She really worked out the trip, we thought. We thought three to four horses ahead of her. We wanted to be close. Looks like this track can play a little more for a forward horse, so we didn't want to take too many chances having her too far back. Irad executed it perfectly. And the filly showed up once again. So pleased with her race."

Right: The trophy presentation for the Filly and Mare Sprint. Winning co-owner Jay Hanley said, "She started off her career well. She came in, for her, a disappointing second in her first race, her only loss. I believe that was at Gulfstream. Then she came here, broke her maiden. She basically reeled off four wins in a row now. I guess it's six in a row now. Wow, we made it six today. Isn't that great. But her last race at Ballerina, obviously a Grade 1, Chad had the confidence to put her in there. The race before that was a three other than at Saratoga that we kind of had to go to. We were put in a stake two weeks before that three other than, or a week before the three other than that actually didn't go. They couldn't fill it. I think everybody was afraid of us." 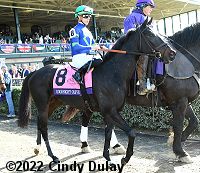 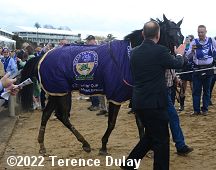 Left: Goodnight Olive heads out to the track. Winning jockey Irad Ortiz Jr. said, "Lot of speed in the race. She broke on top, but I didn’t want to rush her. When she’s on her game, she can do anything. I’ve ridden her and I knew that. I just took my time. I was able to get her out at the top of the stretch and the rest was all her."

Right: Goodnight Olive heads back to the barn with her new winner's blanket. Winning co-owner Steve Laymon said, "And such good horses we beat. That's what makes me proud of this filly. Is you look at the two champions in that field we beat today. And I think one of my partners counted, there were 18 stakes winners in the Grade 1. Total stakes wins for those horses. Just amazing how accomplished she's become in such a short time. Mr. Brown has taught me patience. He's taught me patience before this horse. And it took a long time, but it really works. He's the master at picking a target, giving these horses time, and finding the right spot." 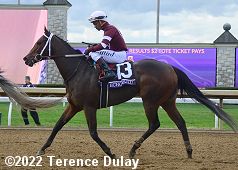 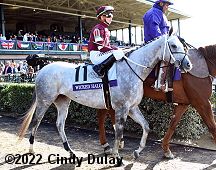 Left: Second place finisher Echo Zulu returns after the race. Trainer Steve Asmussen said, "Ricardo was very frustrated with how wide she was, how much ground she gave. At this level, credit to the winner. She ran well. Sometimes the spot you want is taken."

Right: Third place finisher Wicked Halo in the post parade. Steve Asmussen, who trains both Echo Zulu and Wicked Halo added, "I thought they ran well: second and third in a Breeders’ Cup. It’s funny when you draw up what part of the track you want to be on. We’ve watched three races and it appears what part you want to have. That ended up not being the draws they had." 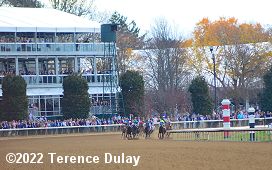 The view up the stretch as the Sprint field rounds the final turn.